This website was possibly the first news site — secular, Christian, or Catholic — to raise warning about future covid vaccinations and their potential links to abortion.

This was done immediately upon the Trump Administration’s mention of a program to develop an emergency inoculation (“Operation Warp Speed”).

The articles were posted before anyone knew what kind of vaccinations would take shape. It was a worry borne out of past vaccines — many of which were formulated with stem-cell lines derived from terminated babies. (Later we also expressed unsettlement with an enzyme used in one covid vaccine that is called “Luciferase,” because it is bio-luminescent.)

Yes, a bit too cute and clever.

That’s one matter: through the years, we have written and posted raising concerns about various vaccines — polio, measles, rubella, Zika, and swine and avian flu — especially those that contained mercury, because of the potential risk of autism. The current vaccines are brand new, and we have taken no side simply because, whatever our personal decision, at this time, at our critical juncture, it is too early yet for anything definitive to be averred in what — at this moment in history — is a particularly momentous personal decision. At this stage, no one has enough information to know the entire circumstance, to write a manifesto, and no one should act as if they do, in government, in the press, in social media, or elsewhere. It is a matter that must be taken to prayer (which is more powerful than anything).

Realize that with the internet, anyone can make any argument or scenario winsome and authoritative. Be careful! The evil one plays all sides (especially at the extremes). At the same time, as always, one must know this: no vaccine linked directly to abortion (as the AstraZeneca and J&J are) should be considered.

Here in Florida, we are at an epicenter. Last weekend, our daughter went to an urgent-care clinic for an infection and was turned away, told to come back in two days (at an immediate clinic!) because they were overwhelmed with covid patients. At the same time, a local hospital was and is on the verge of halting elective surgeries for lack of hospital rooms, and one day recently set up thirty chairs outside its emergency room because there was no room for all who were waiting. In our region of Florida, seventeen hospitals in the chain to which ours belongs have been overwhelmed. Last week in Tampa, covid patients waited a day or so in corridors, and elsewhere patients languished in the fire trucks that brought them, waiting for admission.

This is no fiction. Last we heard a city councilman here (and owner of the barbershop we frequent) was in Mayo Clinic with severe covid (he resisted precautions) and a councilman from the adjacent town who contracted the virus told a newspaper he nearly died three times the week before last, yet was not admitted to the hospital due to that lack of space. (They monitored his oxygen via an iPhone app). A hairdresser we knew (in his fifties) is now spoken of in the past tense; apparently dead from it. So is a chef at one of our favorite restaurants. So are a couple people from church. So is a priest we knew from Wisconsin. Monday we had an appointment to discuss a project with a website technician from Daytona (a very active Christian Evangelical) but it was postponed because he had lost his voice. (He believes the laryngitis is from covid he had a month ago and won’t be able to sing in his church — he directs the music ministry — for two months, he informs us.)

So if you’re going to ask us if this virus is real: if this is a hoax, who is hiring all these actors to clutter hospitals, doctor offices, and clinics — not just here but across America, and in other countries? (For what Maria Esperanza said about future pandemics, and how she may have felt about vaccination, see below).

The point: this pandemic is real, and it is not the flu. The truth sets us free — no matter what we want the truth to be. It may turn out to be less than what the media is hyping. Hopefully, that will be the case. Right now, prayers are needed for our youngsters, who with the new variant are at more risk.

That said, will we recommend the vaccine?

We try to present all sides — often with peer-reviewed scientific studies — and let you decide, prayerfully. Anything else — any definitive medical advice — is above our pay grade.

We know all the theories. We know all the concerns. We have our own. We know the scenarios of conspiracy, and neither accredit nor discredit most of them. We will soon have a “special report” on the threat of global hegemony.

We are certainly no fans of Bill Gates. We are also not fans of QAnon.

Donald Trump claims the vaccines have “saved a hundred million lives” (this to Fox News on Saturday). We don’t know about that. He may be right. He may not. No one can know those particular numbers at this point in time. We also wrote more than a year and a half ago about our suspicions that the virus leaked from, or was otherwise spawned by, a laboratory. (If this is the case, the questions include: which is worse, having a synthetic virus or a synthetic vaccine? What are the very long-term effects of vaccines? What are the long-term effects of covid?)

No one can conceivably answer those questions, for covid has not been observed for long enough and no vaccine can be studied for decades before issuance.

Also, this virus is unpredictable. One certainly hopes it was not released intentionally. That would be the start of a world war.

But the main query: Where does it go from here?

There is, of course, currently, the “Delta” variant, and also “Lambda” and “Delta Plus.” So far they are susceptible to vaccines (and possibly treated with Ivermectin). The Delta surge may, alas, be cresting.

But what about the future? What about those who opt not to vaccinate? Are we going to see a “variant” (mutation) that supersedes vaccines or possible medication — that renders them impotent anyway?

It is the question of the hour.

Call it the “Apocalyptic Variant” — one not only immune to vaccines but also more transmissible and deadly than Delta.

What did Esperanza, who died seventeen years ago this month, and was very respectful of medical science, tell us?

This is from an interview for the book, The Bridge To Heaven:

+
“Maria Esperanza:  There are rare sicknesses emerging that have not been seen before.  Every day there is a new virus.  Here in Caracas, there is a new virus that causes bronchial pneumonia. The heavenly hurricane will come to help the weak ones, a battalion led by Saint Michael the Archangel, who will defend you because he will announce the decisive time, and he will be open to listen to the drums, flutes, and bells, able to stand quickly to fight with the prayer of the Magnificat.
+
“Something is coming, the hour of terrible things during which confused humanity will not find refuge in the human earthly heart.  The only refuge will be Mary.  Misery will ruin the nations, sickness will cause problems and pain and crying – will imprison the hearts, hurting them without mercy.  What pain!  There will not be a ray of light to help them and that is why I plead to you, all Christian families, to get together in your homes and pray. Pray a lot, asking for infinite mercy.”
+
Note Maria’s emphasis on “bronchial pneumonia” — precisely what killed so many afflicted with covid. Would Maria have taken the vaccination? Who knows. Probably some in her family yes, some no.
+

As for “Virus Apocalypse”: we are nowhere nearly there at this point. We believe there is a good chance the current pandemic “surge” will peak by the end of August or early autumn, and then turn sharply downward, as the original coronavirus did — unless it spawns something worse.

It is not inconceivable that by Thanksgiving (we’d never say by Halloween), the coast will seem “clear” or clearing greatly again.

Unfortunately, it’s also anything but inconceivable that there could be a twist of DNA or cytoplasm that causes an even more alien pathogen. The longer it’s around, the greater that chance. Thus the need for prayer (which is the ultimate “medication” and “vaccine”).

Here is a chart of projections with various models of the near future trends (you can see how much they vary): 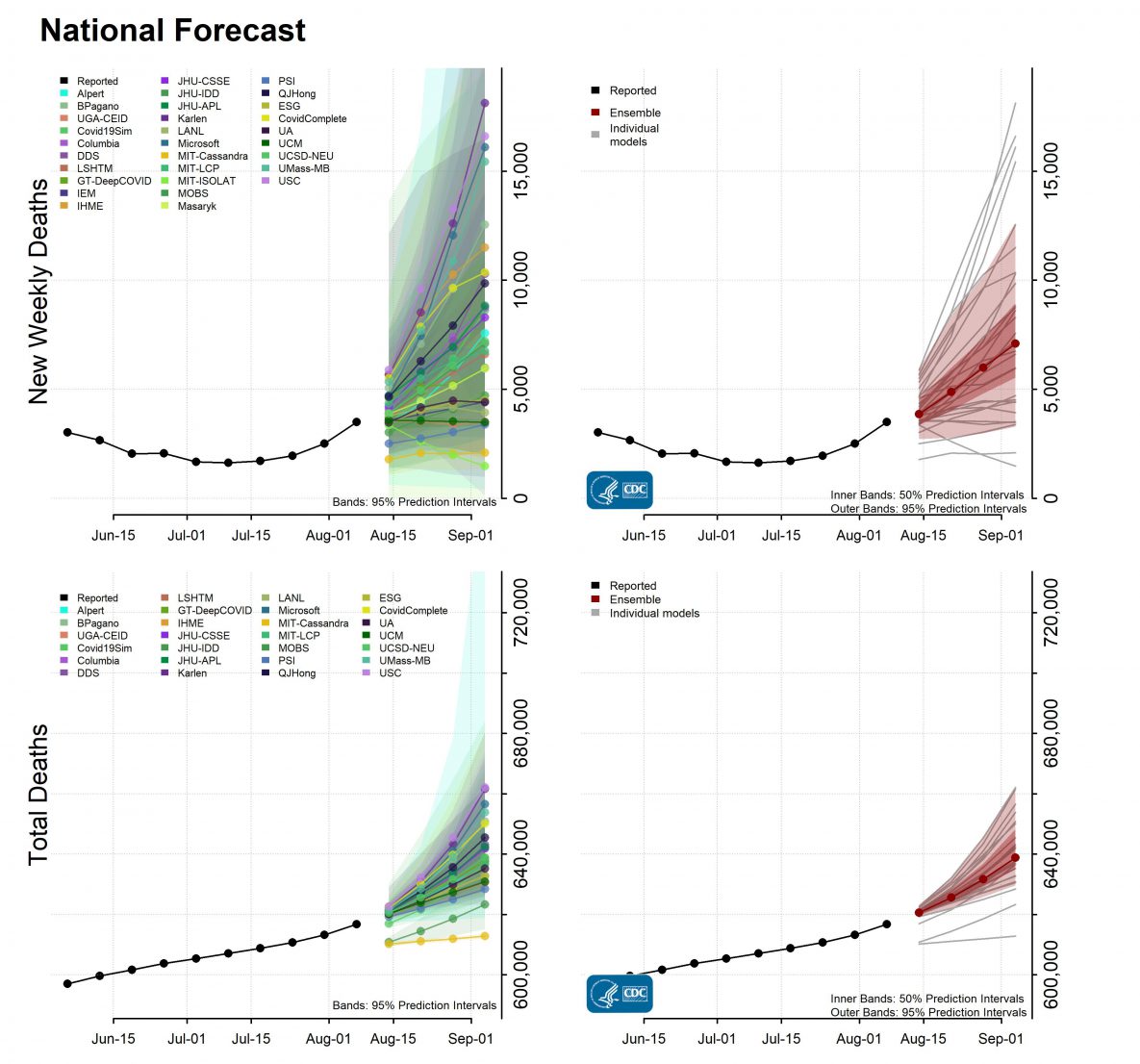 No one is sure of the end game.

Beware of those who lay claim to. This will be addressed in the upcoming online retreat.

Hopefully, it will fade into a seasonal viral challenge, although, again, the coronavirus of this ilk is not a cold or influenza (despite most cases being mild).

What if something mutated that was as devastating as virtually-always lethal ebola and, worse, as transmissible as covid?

Then we certainly would be in a challenging (but never hopeless) circumstance.

Could a pandemic equal that of the Spanish Flu, or even the great Black Death?

If there are the wrong mutations, yes. While we look to earthquakes and hurricanes and volcanoes and asteroids, the end game certainly could involve Virus X-variant. Plagues have been a major form of chastisement throughout history. The current one is minor by comparison. Yes, it could be far worse.

Is it all borne of a spirit of fear? Are we succumbing to that?

Concern is one thing. So is prudence. Paranoia is another. That’s as bad as simply denying reality (for example, of the pandemic itself).

It’s a thought to consider, for evil is known to hold a person in just such an emotional state. It is a spirit of despair.

With God there is only truth and hope and victory.

Added Maria Esperanza: “Even though times look so bad, it is glorious. We are going through glorious times. It will make everything better. Many signs are being disclosed. We should be only joyful. Everything is in God’s control.” 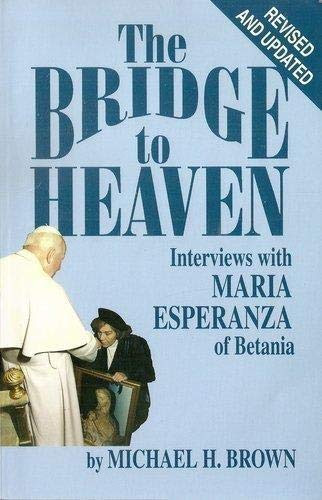