The inauguration in the United States of Joe Biden makes for a liberal shift that will be felt not just in politics, the economy, and culture, but also deeply in Catholicism. There is certainly going to be controversy at every turn.

Biden is, of course, just the second Catholic president in U.S. history. We and many others put quotes around “Catholic” due to his stands on abortion and such matters as homosexual marriage and transgenderism, which the Church preaches against. Just yesterday, President Biden named a transgender “woman” as assistant Secretary of Health.

In a way not entirely dissimilar to Vladimir Putin, who is photographed devoutly kissing Orthodox icons and taking an annual Epiphany dip into icy waters — at the same time that he is regularly accused of tremendous financial corruption and having political foes assassinated (whether by poison, gunshot, or radioactive substances) — so are there remarkable contradictions with American leaders, including the incoming one, who attends Mass on Sunday and occasionally weekdays, carries a rosary with him, and quotes the Gospel, all while supporting abortion “rights,” even late-term.

And so it is that Catholicism is about to take the political stage in a way not seen since John F. Kennedy and with a visibility that will probably exceed that of JFK, starting with a bipartisan morning Mass at St. Matthew the Apostle’s Church in Washington today (with Mitch McConnell and Nancy Pelosi) and then the old, huge family Bible his wife will have to heave up with two hands at his swearing-in after the Archbishop of Washington D.C. prays an invocation. 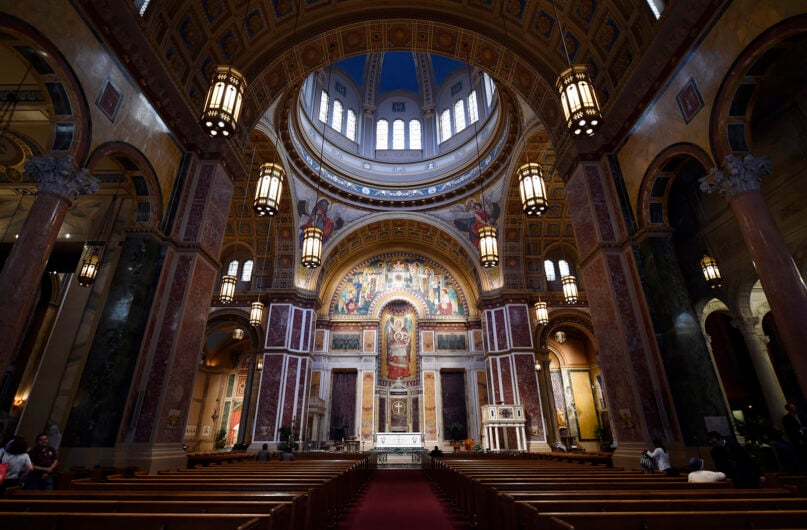 That will only be the start.

Unless Secret Service concerns preclude it (and in the current atmosphere that well could happen), Biden, who during his campaign rarely missed Sunday at his home parish,  St. Joseph on the Brandywine Church in New Castle County, Delaware, will be a stark contrast to his predecessors. The Obamas infrequently attended actual services and the Trumps have not been at a Sunday service, as far as is known, for at least a year. Biden will be regularly pictured on Catholic doorsteps. Will there be situations whereby a parish priest denies Biden Communion due to his excruciatingly unfortunate stand on the termination of the unborn?

If so, it will be a parish outside of D.C., for Archbishop Wilton Daniel Gregory, who already has announced that the new president will be welcome to receive, and he would have no problem in many other dioceses.

While Biden’s stands on abortion (and, again, gay marriages and transgenderism ) put him at odds with Pope Francis, who has repeatedly spoken against all three issues, as well as contraception, and who, while regarded as more of a liberal in the Church itself, would be categorized as a moderate in the secular world — especially next to Mr. Biden, who is a radical liberal — the president is expected to get along famously with the Supreme Pontiff.

From Washington to Rome, a wave of “liberalism” — a liberal Catholic president and a Pope who tacks in that direction (most visibly in what is seen as his tolerance when it comes to homosexuality itself) — is all but guaranteed to gain momentum. So too, like his own predecessors, John Paul II and Benedict XVI, is the Pope outspoken when it comes to protection of nature, which is also part of Biden’s platform, along with immigration, universal health care, and aid for the impoverished, which also will endear him to the Pope. Capitalism will be taking a bit of a back seat. There is the promise of emergency action on the pandemic, which (with 400,000 now dead in the U.S.) is also a pro-life issue.

And so here we go on a real ride, and with this plea:

Mr. Biden, as fellow Catholics and Mass-goers, show us please that the Holy Spirit is actually with you. Show us that He is there with the Host you take. Show us that with the rosary beads, you are in the presence of the Virgin Mary — not just carrying them. Go beyond saying that you are personally opposed to abortion to reversing your public-political stand as well. You cannot separate them.

We realize it’s not just you — that Congress is thirty percent Catholic, as is two-thirds of the Supreme Court (though just twenty percent of the U.S. population), and yet abortion continues to haunt our land and world and perhaps will continue unabated for the foreseeable future (for you, with now a Democratic Senate and House, could even move to codify abortion “rights” — taking the issue away from the Supreme Court, which has not meaningfully acted on this issue anyway).

This would be dastardly and horrifying.

So would suppression of religious rights.

With your vice president, Kamala Harris — who was raised in a household that allowed her to attend a Black Christian church and educated in part at a French-speaking primary school, Notre-Dame-des-Neiges), but who as attorney general of California all but persecuted the Little Sisters of the Poor, demanding that they go along with contraception, as did you — and the new trend in social media of banning people, the concerns are all the more pressing.

Mr. Biden, are you or your people — is a “Catholic” — going to suppress Catholics?

And so are our times.

Whithersoever America immediately heads, we can’t seem to get the right mix. True Christianity has been absent from the American political scene for several decades now. As Pope Francis has said, “The right to life is the first among human rights.” Despite all the pro-life talk from politicians, it remains legal.

Still, Mr. Biden, instead of carping, instead of spewing vitriol, instead of trying to go “viral” by calling you names (there is already enough virus!), we’ll pray for you. We’ll hope, beyond hope — because you are “Catholic” — that we have an opening now.

For at Mass you take Communion, and when we do likewise, your conversion will be in our Communion prayers.