Some may recall the Malachi Martin book on the Church called Windswept House — a brilliant title and one that plants itself smack in the middle of our time.

“Windswept House describes a satanic ritual — the enthronement of Lucifer – taking place at Saint Paul’s Chapel inside Vatican City, on June 29, 1963,” notes Wikipedia. “The book gives a depiction of high-ranking churchmen, cardinals, archbishops and prelates of the Roman curia, taking oaths signed with their own blood, plotting to destroy the Church from within.” 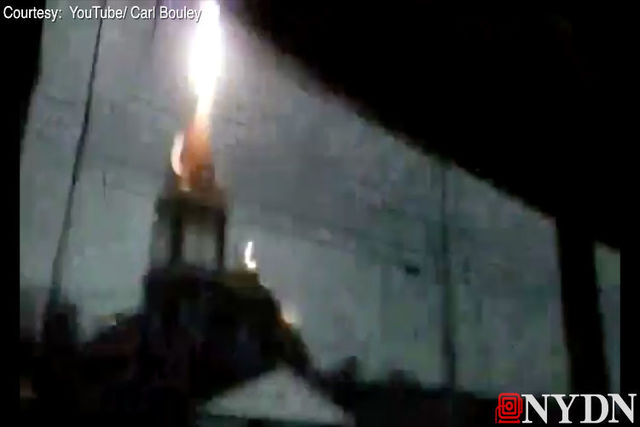 Got to be very careful with such stuff (windswept or lightningstruck?) “The author, long deceased, described the book as containing ‘real events and real people masked in the form of a novel,’ a device he refers to as ‘faction.’ According to Martin, 95% of events in the book are real, and 85% of the characters are real people.”

Quite a claim. We recall a woman from South Carolina and her mother calling us many years ago — in the very early 2000s — claiming that a bishop who was to become a major American cardinal had forced her as a girl to participate with him and of a couple priests in a vile act with a Communion Host in the basement of a church. We frankly could not discern the truth of what she claimed — had doubts about the credibility. We were only too well-aware of “false-memory” syndrome (which itself may be the handiwork of evil forces).

But that there are deep-seated problems in the Church, and that the devil has incited them — if not through actual ritual, by simple supernatural impartation — is beyond question. The greatest problem in the Church is lack of mystical humility.

“Students in seminaries in the ‘60s were taught that becoming a priest takes your being through an ‘ontological change into the Divine,'” notes a website called Crikey. “Some offenders interpreted this as giving them more power and entitlement — a ‘messiah complex,’ as canon law expert Kieran Tapsell describes it in Potiphar’s Wife: the Vatican’s secret and child sexual abuse. Others believed it was part of God’s mission to make them better servants of the people.

“The big problem with the so-called ‘ontological difference’ between priests and laypersons, argues Bishop Geoffrey Robinson, a senior Catholic bishop who has pushed for reform in the Church, is that it enthusiastically embraces ‘the mystique of a superior priesthood.'”

Priests must be respected in a special way, but not revered. That belongs to the true and sole Messiah. It is perhaps no coincidence that the 1960s were also when sexual abuse skyrocketed in the Church (through human weakness and hubris, leaving us with less need to theorize rituals).

Now, if you want a snapshot of spiritual jousting, in our time, stroll in downtown St. Louis (such a Catholic city!) from the Cathedral Basilica of St. Louis east down Lindell Boulevard and there you have it, block after block.

At the same time that you have the grand cathedral, so do you have buildings that stand as symbols of what the Church struggles against.

There is a law firm that took over a Catholic facility (note the angels at the entrance).

There is a lion that roars.

There is a huge Krishna Center.

There is a massive Masonic temple.

And then, to take us full circle, near the corner of Grand, there is the church, Saint Francis Xavier College Church, which was the scene of a dramatic event when, at the culminating moment the most famous exorcism in modern history (the case behind the movie, The Exorcist), a sonic-like boom was heard in the church, and inexplicable lights were seen near the veiling by priests praying their Office. (The actual exorcism, as we recently recounted, was taking place in a rectory next door). 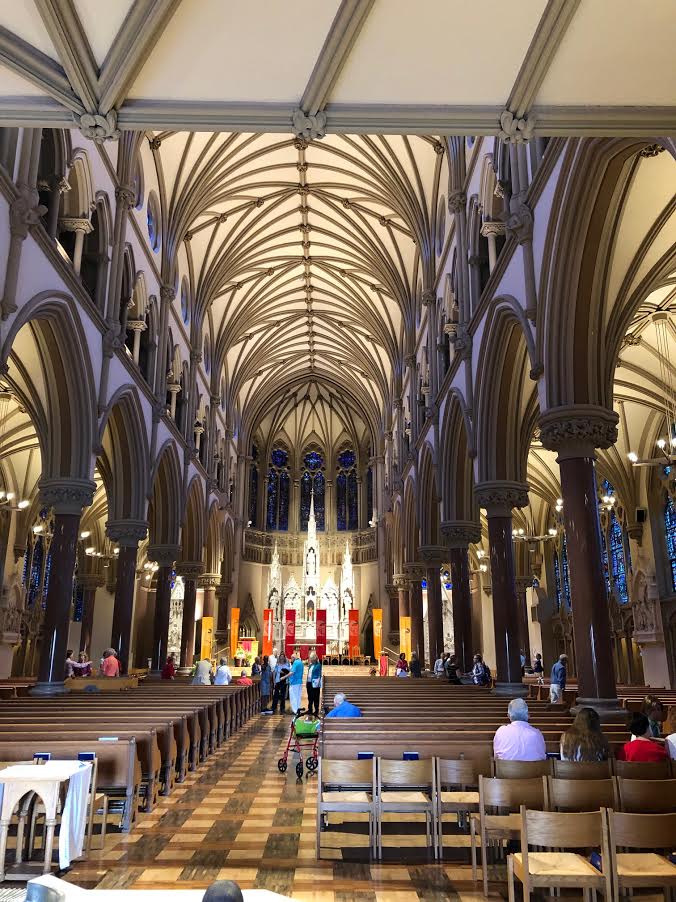 And so it goes. If you want to see the liveliest Catholicism on the planet, go to where Mary has appeared: Lourdes, Fatima, Guadalupe, Laus — although deeply Catholic pockets like St. Louis can also lend us grace.

A conflict, is life on earth. The Spirit versus the flesh. Eternity versus the world.

We know what and who (and Who) wins in the end. 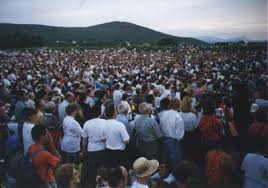 [Feedback from the mail: “Someone said they were tired of the Catholic Church because of all the scandals…. They are misplacing the blame.  If a bishop, priest, religious or layman fails to live up to the standards he is preaching, the blame lies with him and not with the message he preaches. His actions say much about himself but not about the teachings of Christ. Jesus certainly practiced what he preached, but if someone else preaches Jesus’ message exactly the same but does not practice it perfectly, it is not logical to conclude that the message of Jesus must be flawed. By way of analogy, if it were proven that Albert Einstein was a child molester, that would not disprove the theory of relativity. A system should not be judged by its worst adherents but by its best, those who actually live up to its standards. Judge the Catholic Church by its saints, not by its hypocrites. The Church is not only the nursery of the saints, but a hospital for sinners.’  If being hurt by the Church causes you to lose your faith in God, than your faith was in people and not in God. I am proud to have gone to Catholic schools and my children also. No regrets.”]