In the mailbag in February was a photo/artist’s depiction of Saint Bernadette at Lourdes, as the month of the apparitions there drew to a close.

It struck us as a painting — albeit a lifelike and excellent one. Could it actually have been the seer in the “photo”? 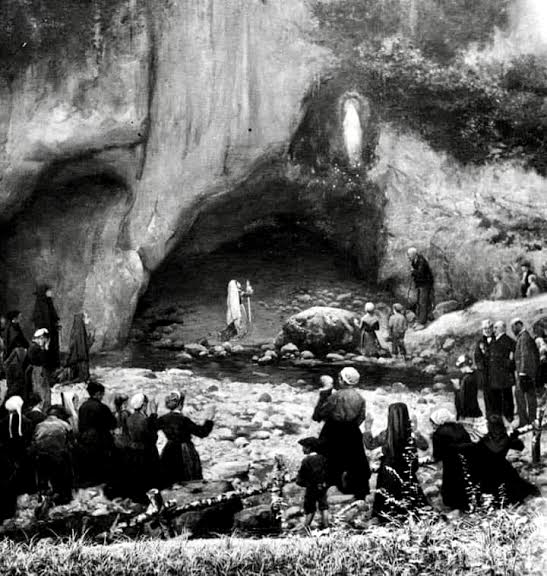 The statue you see in the concavity above the grotto was placed there in 1864, six years after the apparitions ended. But Bernadette was still around; she didn’t enter the famous convent in Nevers until 1866; and no doubt she visited the site of the apparitions many times.

The photo below seems to be the real deal; exactly that: the product of a camera.

The question here: is there a strange spiritual interplay embedded in the photo — images in the rocks, some holy (perhaps the veiled Virgin and Jesus, others purgatorial or worse), that may depict the mystical battle attendant there as well as so many other such places? (It is well-documented that demonic forces tried to take over the grotto right from the start. Earth for certain is hostile territory!) 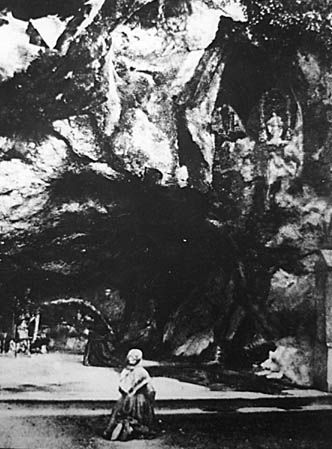 Note what looks like a smaller version of the statue later placed in the rock indentation. (And note, at the middle of the top of the entrance, an alien visage that glares as if in opposition.)

As for what unquestionably is artwork, a powerful image of Mary came via the Catholic News Agency recently [below]. 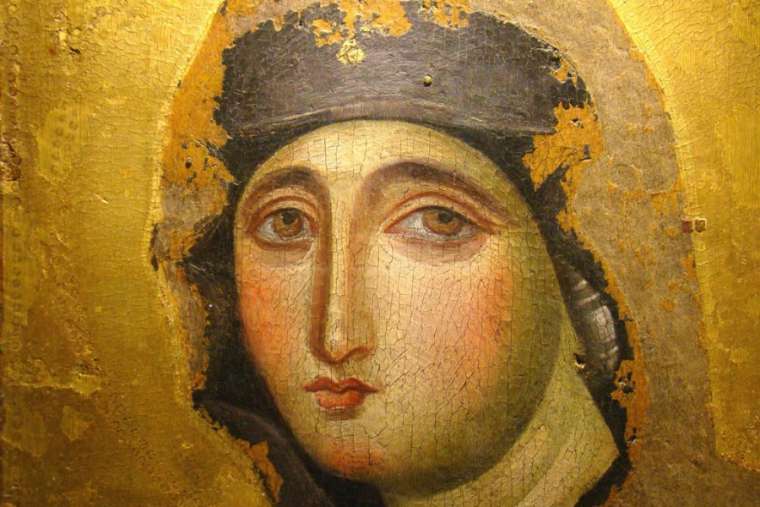 Eight hundred years ago, it seems, Saint Dominic — who received the revelation that led to the Rosary — walked barefoot with this icon across Rome, entrusting it to a new community of cloistered nuns who have safeguarded it within the walls of their convents to this day.

Known as the “Advocata” (Advocate), it’s in a small chapel on Rome’s highest hill in the Church of Santa Maria del Rosario on Monte Mario in Italy (where else). There’s definitely something about it!

The church is also known (perhaps less appealingly) for the relic hand of Saint Catherine! 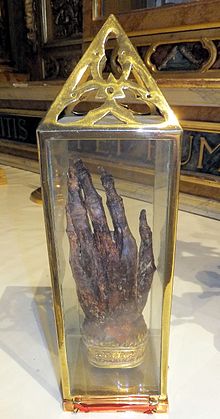 There’s also this familiar portrait (of a Dominican nun) there.

Getting back to the image Saint Dominic brought, the news agency further informs us that “the convent closed to the public earlier this year after all of the sisters fell ill with COVID-19, but has since reopened following their recovery. Even from behind the bars of the grille, the icon has a penetrating gaze. The image dates back to at least the 7th century and has been revered over the centuries as having been painted by Saint Luke.”

[resources: The Last Secret] and video of Michael Brown retreat: Mary through the ages and into the future]

[Footnote from the mail about Lourdes painting/photo: “Wow, thanks for sharing this image, I had never seen it before! It would be great if the original could be known. On one hand, it ‘seems’ like it would be a photo of a painting; I say this due to some of the rock formations, for example, inside the cave nowadays, there is more rock. It is true, they have done “renovation,” so perhaps it wasn’t the only area touched. The figures on the right look like they would be posed to create interest by speaking to each other. There are areas of blending much like brush strokes would create. Our Lady is done beautifully with blending in the lower part and a luminance about her.  Movement seems absent from any of the subjects such as hands in which you would see more of a blurred effect. The overall depiction was well thought out.

“On the other hand, the apparitions were 33 years after the very first photo was taken in yes, France in 1825 which makes it a likely candidate to be possible, given the fact that this was a historical event from which news had spread and was somewhat ongoing. A person taking up this new invention of ‘history recording’ in hard documentation of historical events would have had a field day to attend. Photos of the era are very much like the picture shown, with the harshness of blacks and whites with little grays and detail. The vegetation in the forefront does not look hand-painted. [It’s] another incredible image that moves the spirit for sure. Like so many historical events, to have been there in the moment would be a moment etched on ones’ thoughts for eternity.” — Tom Morrison]
+
[Footnote: alleged message, Our Lady of Zaro, to seer Angela (2/7/21): “My children, pray much for my beloved Church and pray that the true magisterium of the Church would not be lost. The Church is in the smoke of Satan and your prayers are needed so that this evil would leave her. Pray for my chosen and favored sons [priests] that they would stop causing scandal, distancing God’s people from the holy Church.”]
+