Was the Great Chicago Fire of 1871 — the most famous in American history — a modern-day Sodom and Gomorrah, with mysterious components linking it to a historic fire that raged at the very same time in Wisconsin, where the Blessed Mother had appeared with a warning of coming punishment twelve years before (virtually to the day) — and might both offer clues as to what will one day soon occur to the United States?

Was it — were these fires in the Midwest — part of an American chastisement? 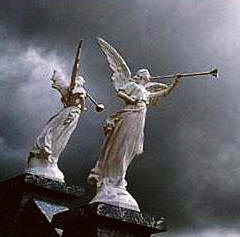 Moreover, components of what occurred in both Chicago and Wisconsin during those unprecedented fires remain unexplained; in addition to the tremendously dry conditions and outbreaks of sporadic fires for weeks leading up to the events were aspects that seemed almost cosmological or preternatural (on the order of fire and brimstone). They both erupted into disasters on the very same day — some say the very same hour.

They both had elements of a gaseous atmosphere — whereby fire exploded in mid-air. Some posit that a plume of debris from a comet called Biela that had broken up could have contributed to the outbreak (which also affected parts of Michigan — where a meteorite was actually located).

Most importantly: the way the two disasters unfolded seems to offer clues as to what we see in our own time and how it might reach a crescendo.

The clues are tantalizing, hidden in obscure details.

There are always warnings, it seems — in the weather, in society, in revelations — and such was the case in 1871.

The Wisconsin fires, which eventually torched 1.2 million acres — an area twice the size of Rhode Island — were preceded by smaller such events, smaller fires, little outbreaks, even little firestorms, that for weeks had plagued the region.

Much of it focused on a center of commerce called Peshtigo — not far from where Our Blessed Mother had appeared on October 8, 1859, at Champion to a devout Belgian immigrant woman named Adele Brise, warning of the need for “conversion of sinners” and that “if they do not convert and do penance, my Son will be obliged to punish them.”

Historically dry weather conditions had persisted in this swath of the Midwest and these incredibly dry conditions spawned fires here and there for weeks leading up to a gargantuan firestorm that exploded when a cyclonic hurricane-force weather system blew across the region, contributing to both the greatest forest fire and greatest urban fire in American history though they were separated by 262 miles.

Lust. There were the houses of prostitution for the loggers in Wisconsin as there were also such establishments in Chicago.

Irreverence. During her apparition, Adele said the Virgin pointed to those who did not know nor exercise nor teach the Faith.

“Half wild, half-civilized, Peshtigo was synonymous with progress,” noted an authoritative account of the fire (Firestorm At Peshtigo), which we were graciously given at our recent retreat.

“For the solitary lumberjacks who had successfully denuded the forests of Maine, New York, Vermont, and Pennsylvania before migrating west, Peshtigo promised steady work. The place was overflowing with trees.”

Chicago and Peshtigo: profiles in “progress,” “fast living,” and “prosperity.”

We may also be interested in the fact that these two great and simultaneous events were not only presaged by an apparition — one that was approved in 2010 as the first in the U.S. — but also accompanied by events that, like the precursory wildfires, seemed tied to it: a financial crash in 1857 followed by the Civil War, which Lincoln himself had proclaimed as a “chastisement.” (Let us take note. For in our own time, the same game plan seems currently in motion.)

“In response to the danger, itinerant preachers suddenly began stalking the countryside, appearing in settlements waving their Bibles until they became as familiar as the smoke,” notes the book of the conditions just before hurricane-style winds — and perhaps a more mysterious, cosmic component — stoked up the inferno.

The preachers were suggesting, says the secular history, that the work of all around “was about to explode before their eyes unless they all made an effort to ask forgiveness.” As a newspaperman named Benjamin Tilton of the Green Bay Advocate further recounted, “Whether we were all unrighteous, or lacking in faith, or doomed to chastisement for our sins or for a solemn warning to the world, we leave to others to decide.”

Certain it was: the scourge increased.

A fire here. A fire the next day elsewhere. Another fire. A repeat.

Larger and larger in size, starting in September. One preacher in Peshtigo “invaded” a lumber camp to warn that “God is very angry with some of His children in Peshtigo. He is going to send doom of some sorts.” (He was ignored.)

As in our own time, Protestants and evangelicals, in their own style, waving Bibles, echoed the warning of the Virgin.

This was just days before the conflagration.

There was a famous priest in all this, Father Peter Pernin, who had two churches (one dedicated to Lourdes) and who described Peshtigo as “exploiting the surrounding forest lands to the fullest advantage.”

Before the wildfire exploded — moving in Wisconsin like a five-mile-wide and one-mile-high tornado at various points, at simultaneous times, in different locales — with the temperature of a crematorium, turning sand to glass, exploding the air — Father Pernin reported “a vague fear of some impending though unknown evil haunting the minds of many, nor was I myself entirely free from this unusual feeling.”

As he also reported — of the 1,200 to 2,200 who died (a number that is really unknown and may have been much higher but brings to mind 9/11 and still stands as the greatest number who have died due to fire in the U.S.) — “people simply became piles of ashes or calcinated bones, identifiable only if a buckle, a ring, a shawl pin, or some other familiar object survived the incredible heat.”

Even those who sought shelter in wet blankets on meadowland or in ponds and wells were incinerated.

There were bizarre black clouds spitting lightning (recounted the priest).

Perhaps this was from marsh gases.

Coins fused in  the pockets of victims, though the clothes and corpses were not burned.

Fire seemed to fall from the sky.

Flames formed a ceiling over the Peshtigo River.

There were massive whirlwinds of flame.

“The survivors would never forget the sound,” noted Firestorm At Peshtigo. “The sound ‘of judgment,’ some said. The sound of an angel heralding the end of the world, blasting gusts of fire from his horn. ‘Like a thousand locomotives rushing at full speed,’ some wrote.

Like the devil had opened his mouth with a ‘deafening, persistent roar that never stopped but kept growing louder,’ or ‘a pounding waterfall,’ or a ‘hurricane.'”

In Chicago, a church dedicated to St. Michael was one of just six structures to survive that simultaneous — and to this day, unexplained — fire (the cow kicking a lantern was an admitted, newspaper-contrived myth that somehow survived admission of the hoax).

Chicago, Peshtigo: do they have lessons for us.

What do they tell us about the storms and seismic events and economic rumblings and societal divisiveness that resonate — and are increasing — in our own time?

The two greatest fires ever occurring on the same day — and virtually twelve years to the day of the October 9, 1959 apparition (the fires spanned from October 8-10, 1871).

We have harbingers in our own time.

As at Peshtigo, there are warnings; there are fore-echoes; there are apparitions; and as in Wisconsin, most fall on deaf ears.

God protects His own. In Wisconsin, a little shrine area of five acres dedicated to that appearance of Mary near what is now called Champion, Wisconsin, was all that survived the holocaust; the flames literally stopped at its fence (with the seer Adele in a chapel inside).

It was described as an “island of emerald” in a sea of ash.