[Many years ago, we ran the article below. Later, when Pope Francis became Pontiff, it turned out that he has a strong devotion to Mary as presented in this same painting.]

(Today’s reading: “Brothers and sisters: I consider that the sufferings of this present time are as nothing compared with the glory to be revealed for us. For creation awaits with eager expectation the revelation of the children of God” (Romans 8:18).)

As Mary once said at a very famous apparition site, “In prayer you shall perceive the greatest joy — and the way out of every situation that has no exit.”

Think of those words. Don’t you often find yourself in a situation that “has no exit”? How many times have you run into problems that seem to offer no positive outcome? Have you ever painted yourself into a corner?

There’s a fascinating painting that pertains to this and has been venerated in a church in Perlach, Germany, since 1700. It was painted by an unknown artist and apparently inspired by a meditation made by St. Irenaeus — who once said: “Eve, by her disobedience, tied the knot of disgrace for the human race; to the contrary, Mary, by her obedience, undid it.” 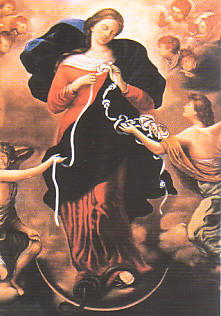 There we have it. Mary, Undoer of Knots [see devotional booklet; her Rosary here]. Now that’s a title for her! Mary, help when there is no way out. And in fact it is the subject of a little novena pamphlet. As the pamphlet explains, the image shows Mary with a crown of 12 stars and a fluttering blue mantle. Around her are angels. Beneath her feet is the serpent — the one who ensnares and entangles.

The point: when Mary is invoked, she untangles our knots and it is then the serpent [see left] who is tangled (whatever the novena)!

As is also readily observed, one of the angels in the painting holds the ribbon of your life as the Blessed Mother calmly and easily goes about straightening out all the knots in it.

A mysterious and beautiful image this is! Usually we think of the knots in our lives as particular troubling situations, but they are also problems we have had for years, perhaps deep hurts between husband and wife, anger, resentment, sinful inclinations, the absence of peace and joy at home.

This, apparently, is where Mary Undoer (or “untier”) of Knots comes in.

A knot can be a son addicted to drugs. It can be alcoholism. It can be guilt. It can be fear or depression or unemployment.

Ironically, there are those who have claimed a miracle by which rosaries become entwined as if manufactured together (see below). It occurred at the aforementioned apparition site. Is this related?

The point is that Mary comes to our aid in many circumstances.

“Knots are original sin and its consequences in all areas of family, work, and community life,” points out this tiny pamphlet. In the painting, we see that while one angel hands the Blessed Mother a knotted ribbon, another to her right is taking the untangled part and perhaps preparing to return to earth below with it.

In the darkness of earth is seen a person who is led by an angel to a church at the top of a mountain. This, says one interpretation, is the Archangel Raphael who accompanies Tobias to meet Sarah, the one chosen to be his wife. Sarah is unburdened from a great “knot” which blocks her happiness. “By the mediation of the Archangel Raphael, God unites Sarah to Tobias, showing us that humility, trust, and faith in God is what moves the Divine Hands in our lives,” says the explanation for the mysterious art. “This extraordinary story is present in this painting to show us that ‘Mary the Undoer of Knots’ grants innumerable graces to matrimony and powerfully intercedes for the reconciliation of families.”

When Raphael is involved, there is healing!

Again we hear an echo of the words: “In prayer you shall perceive the greatest joy and the way out of every situation that has no exit.”

Think of it: even when intellectually we can’t figure out a resolution or means of escape, God can turn things around in such a way that there is a sudden opening and there are angels and we are suddenly saved.

[And noted a reader: “The article on the painting of Mary undoer of knots has possibly another interpretation. The prayer shawl of the Jews and of Jesus had and have two tzitzit or knotted ropes in the front.  When the woman touched the hem of Jesus’ garment and was healed, it was this tzitzit that the woman touched… These two fringes are knotted in a special way and are were the conduit of God’s healing and man’s prayers…”]