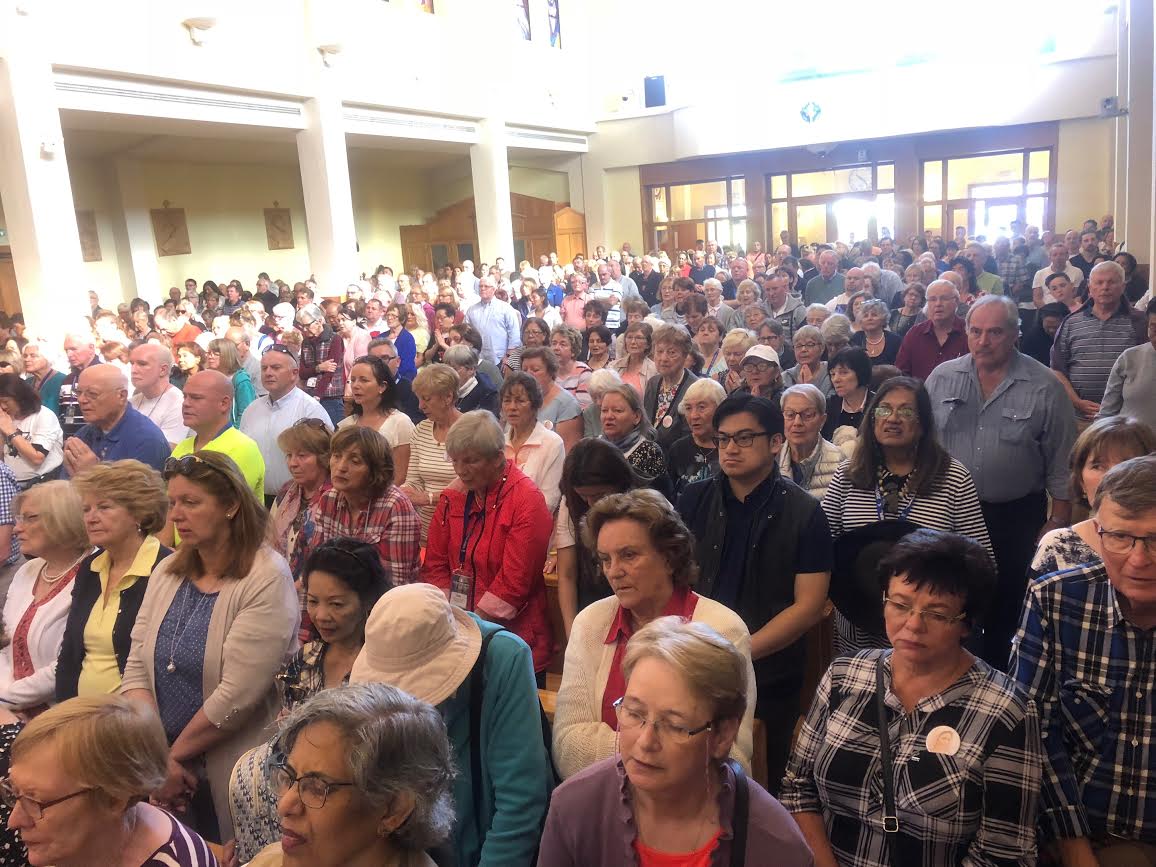 To say that busy times have returned would be an understatement. We are in Eastern Europe.

There are so many pilgrims that, at points, recently, transport companies ran out of buses.

The same has occurred with tour guides — so in demand that also, at one point, not a single one was available in the area.

The church of St. James — that famed two-tower edifice in Hercegovina — is not just standing-room-only (for daily Mass) but to the point where, during one recent liturgy, an amphitheater in the back was filled with several additional thousand. 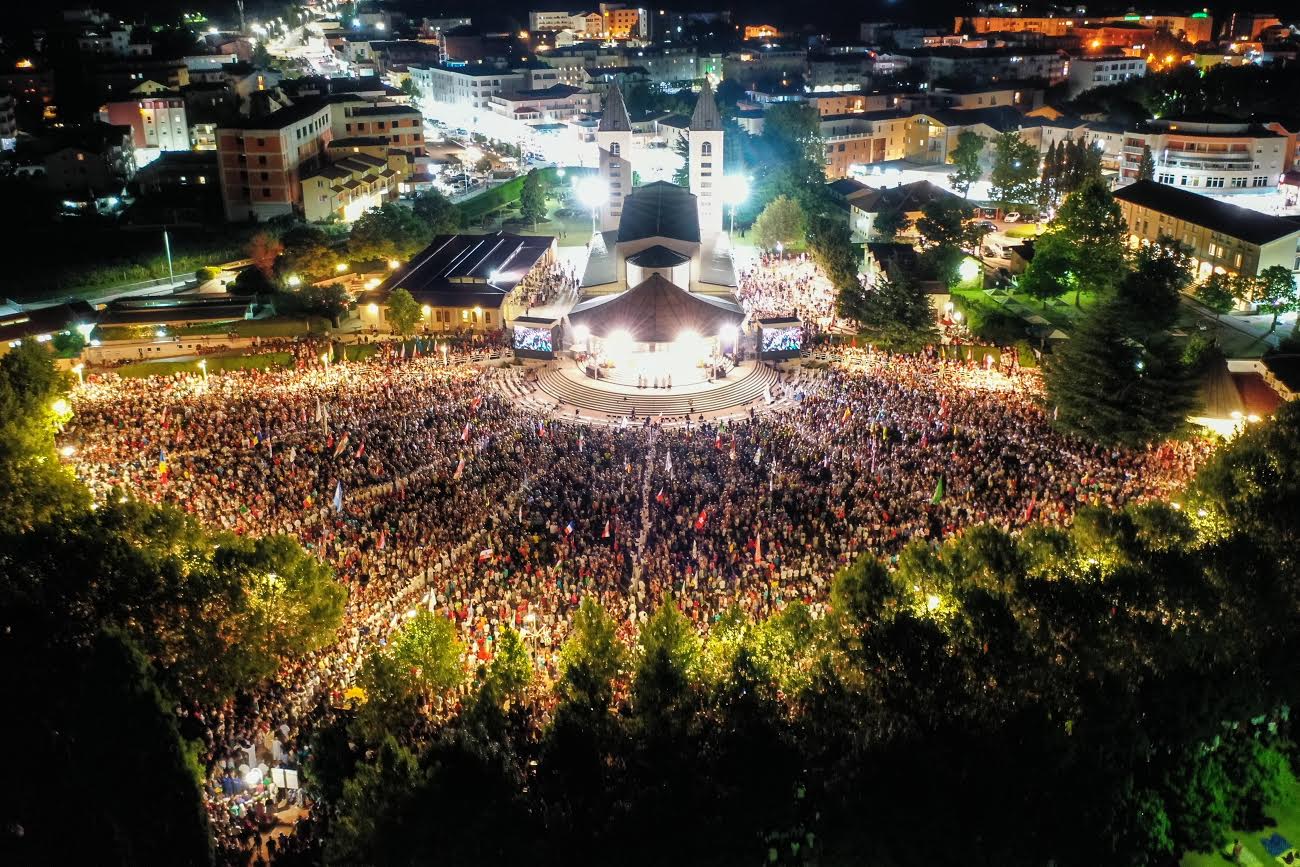 And that was just for the English  Mass (there are also daily Masses in: German, Italian, and the native language of Croatian, and another Croatian Mass in the evening). Last night there were 5,000 for Adoration outside in chilly air at 9 p.m.

This of course is Medjugorje, which according to long-time tour guides (including one of ours who has 31 years of experience) is seeing more pilgrims “than ever,” especially English-speaking ones, who are stretching the capacity not just of the church but also confessionals, meeting areas, and the Adoration hall. It is why the Vatican envoy, Archbishop Henryk Hoser, now assigned full-time to Medjugorje, has called for a revamping of its infrastructure, with rumors that a huge new church may one day be constructed in the vicinity. 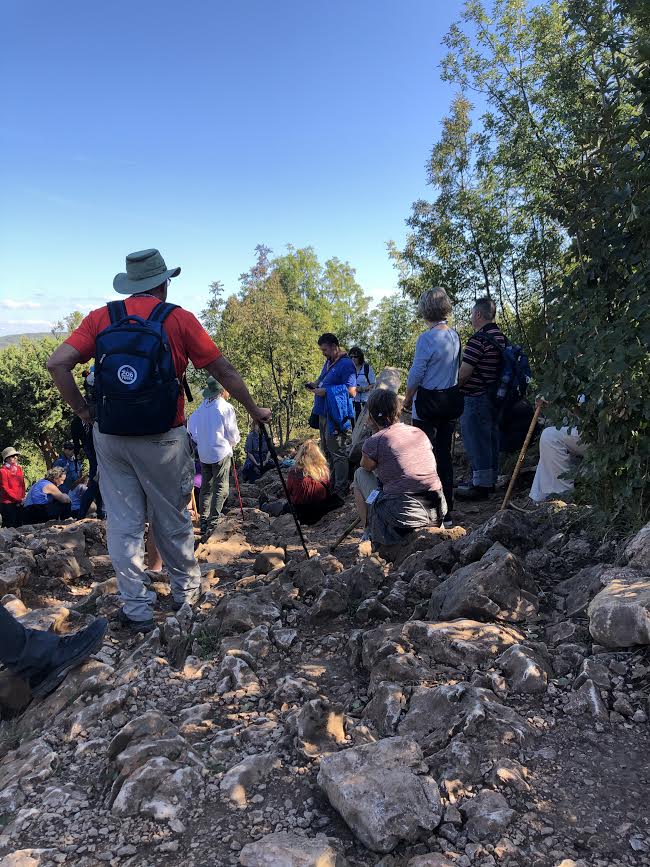 Priests are literally shoulder-to-shoulder on the altar — at the English Masses, usually more than two dozen — while lines for Confession and at a bronze sculpting of the Risen Christ, which inexplicably emanates an oily water from a knee “wound” (though now not quite as continuously) are as lengthy as ever.

It was Saint John Paul II who first had an intense papal interest in Medjugorje (telling one priest from the parish to “protect it,” and calling it “the fulfillment of Fatima”), followed by Pope Benedict XVI (who as a cardinal headed off attempts by the local bishop to quash it, and as Pope established an official commission to study it), followed by Pope Francis, who was not quite as warm to Medjugorje as John Paul II but fully accepted the commission’s positive report and sent Archbishop Hoser as an envoy, approving official parish pilgrimages.

Those moves have proved to be watershed ones.

During apparitions streets around what is known as the “Blue Cross” often take on the appearance of Times Square as the clock ticks on December 31 to midnight. And Medjugorje continues to generate vocations: Recently, six new Franciscans were ordained, and hundreds of thousands of Hosts are distributed each month.

It was in the early messages of Medjugorje — which were diligently read each month by John Paul II — that a focus on youth emerged, with verbiage resembling that used later by the Pope when he established World Youth Day.

Unlike most of the Church, Medjugorje is highly popular among the young (our children always longed to revisit, and have now been here three — and in one case four — times).

(Hear ye, Western Church: the problem here is not empty pews but not enough of them.)

While a tremendous increase in hotels and similar accommodations has absorbed many of the pilgrims — with far more restaurants and other facilities to occupy pilgrims during the day, lessening the crush around the church — the numbers, particularly from Poland and Ireland, have skyrocketed, with the U.S. also on a significant upswing, sending more here than at any time since the Bosnian war in the early 1990s.

The war had led to a lengthy and steep decline in attendance that now has been reversed, partly in response to the Vatican enjoy and approval of official pilgrimages, and as widespread campaigns hurling invective against the site have faded.

The apparitions — the first week of which already have been declared “authentic” by a Vatican commission — have become what Archbishop Hoser calls “the spiritual lungs of Europe,” which, like America, needs all the oxygen it can get. As at Fatima and Lourdes, the Blessed Mother may be a bit more difficult to find — among all the buildings — but is still here, strong as ever.

[Seer update: Jakov Colo remains in the village, and now administers a growing program to feed and otherwise assist the poor, currently supporting five hundred families; Vicka Ivankovic has not been greeting visitors, undergoing eleven recent surgeries for back problems; Ivanka Ivankovic also remains in her home just outside the village, keeping an extremely low profile, while Mirjana Dragicevic continues to have public apparitions each month at the Blue Cross near Apparition Hill, forsaking needed knee surgery because she wants to minister to pilgrims; Ivan Dragicevic is currently here in Medjugorje but spends most of his time in the Boston area; Marija Pavlovic, who receives the monthly message, lives mainly in Italy.]

[We thank 206 Tours for its excellent handling of the pilgrimage; we are praying for you all]