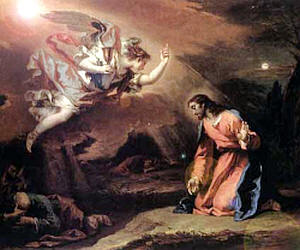 Christ did. Remember the desert?

Look at your life. Look at each day. You know how they can go: One is smooth beyond all expectation, with everything falling neatly into place; your timing is just right; what you are trying to do goes together without a hitch. All the gears mesh in whatever you’re attempting, and people are treating you just right.

We all have them. Hopefully, we thank God for them.

Because they are supernatural.

And then there are bad days — when you’re all thumbs and when everything that could go wrong does.

You’re out of sync. There seems to be a gremlin throwing little wrenches into those gears. No one likes you (or at least, no one helps). It happens to all of us all of the time. And some of it is simply the flow of life: we are tested. Every day, our patience is examined by the Good Great Lord.

But there are ways we can enhance those “good” days and one is by making sure we are utilizing angels. That means prayer. It increases the likelihood that we will draw down God’s blessing that day or in a particular endeavor. You know His angels are orchestrating things when a task is done and done well in half the time it usually takes, when there is this flow that seems to let you glide over a job that can often be taxing.

When mystics see angels, they describe holy entities guiding events and people around us  (what we consider good “luck”). You know those classic paintings that show angels playing instruments in an orchestra? They orchestrate. Look at the role they played in the discovery of Jesus’ Resurrection. And meditate this day on how very many times angels may have helped you and even saved your life. When we die, we’ll see how many precarious situations they prevented or guided us through. And it will amaze us. A good day it is to thank them.

“I remember standing about ten feet up and ten feet to the side of my body on the operating table,” Jonathan recounted in this book that has been drawing national attention. “Around the table were at least a dozen nurses and doctors. But what was so emotional was the presence of glowing people who I can only describe as angels.

“Each angel was guiding the hands of the staff they were standing next to.

“I don’t remember details too specific, such as what tools were used or the exact position of my body, but only because I was focused so much on the angels guiding the staff in everything they did, from walking to the use of the tools within my chest cavity.

“Even after the operation, I still had an unusual peace and no fear. The doctor said it was the best operation he had ever gone through — there were no problems at all — and he was impressed at my rate of recovery.”

When we have peace, when we “glow,” when all seems so smooth, it is because angels hover around and over us. We “draw down God’s blessing.” Form your sanctuary; open it each morning with a Rosary (perhaps a Scriptural Rosary, or at this time of year, the Stations). Fast. Pray from the heart. Get closer to your guardian!

There are plenty of angels around, especially during Mass, there for the asking.

[Resources: books on angels; also: Evidence of the Afterlife: The Science of Near-Death Experiences,