Do pets go to Heaven?

Dr. Candace Williamson Murdock of Rome, Georgia, had a vision shortly after suffering a miscarriage. “Suddenly,” she said, “a scene appeared — as if it was on a movie screen — right in front of me.” She blinked, but the vision remained.

In it she saw dogs playing and chasing each other; they looked familiar, somehow.

Watching intently, she suddenly saw her father — who had died seven years before — appear in the scene. He’d raised and loved many dogs in his lifetime.

He was gripping the hand of a small blond child.

Both were smiling in this place of bliss!

Instantly Candace knew it was the child she had lost.

“I had never experienced anything like it, nor would I have pictured Heaven in this way, but I was not hallucinating,” she insisted. “To know that my child, my father, and his beloved dogs were all together was the best answer to prayer that I could have asked for. God does care.” 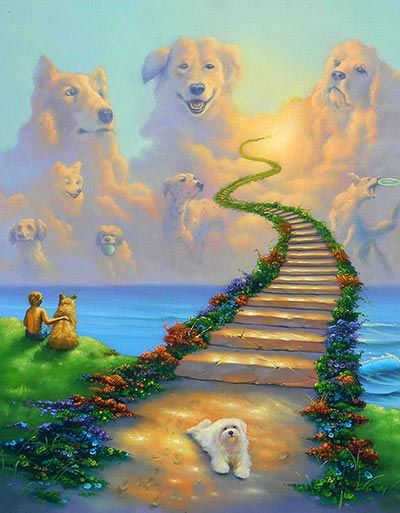 We wrote recently about how a dog doomed to die saved an infant after the owners had refused to put the animal “down.” A tired, sick, worn-out pet ended up preventing a child’s crib death.

That’s real life. There are also accounts that have to do with animals in dreams. These accounts come to us from Joan Wester Anderson’s excellent book, Angelic Tails.

In it Anderson, who hails from the Chicago area, recounts how in mid-July of 2008 a woman had a strange dream about the family’s purebred collie, Bo.

It was a sad dream. Bo had been missing for five years. It had been a warm, friendly dog, writes Anderson — they’d only had him a year — and it disappeared a few days after the family moved into a new home in Northbrook, Illinois in 2003. Bo had an identifying chip implanted, with their contact information, but no one had ever called. In one case they’d gotten a call from a shelter but the dog didn’t turn out to be their collie. The dog apparently had not been found. There was no telling where it was — and great doubts about whether the collie was still alive. Heartbroken, the family eventually gave up efforts at finding the pet, though the dog never left their memories and hearts…

The dream in question had occurred to Melissa Moeller. Her father, Bob, was a minister who led prayers every night that someone was out there taking care of the animal and loving him as much as they had. The dream Melissa had was farfetched: in it, Bo returned. The family was joyfully playing with him.

“So,” writes Anderson, “when the family received a call from a shelter in Rockford, Illinois, just a few days later, Bob was afraid to get anyone’s hopes up again.” A worker at the shelter told the Moellers that a collie they were holding had a microchip with their information on it.

They drove to the shelter the next afternoon. It was unkempt and thin — and just days away from being “put down” (if no one claimed it). One has to be very careful with microchip stuff — at least in humans. But here was a different story. They could hardly believe their eyes. The dog at the shelter indeed was theirs. They could tell so when it started to whine upon seeing them and knew Bob’s commands! God watches over all His creatures and speaks to us — prepares us, sometimes — in our dreams.