Can spirits of the deceased leave images of themselves?

To be sure, we’ve seen countless stories that seem to instantiate this notion, though one must be especially cautious, for it can tend toward spiritualism and other forms of the occult.

In Rome is a little church museum dedicated solely to purgatory and physical signs left by deceased in need of prayer.

As far as secular cases, a famous one, reported from a small town in Spain:

That of a woman named Maria Gomez Pereira from Belmez who was confounded one day to note a stain forming on her kitchen floor. This was in 1971 and the image resisted all her attempts to scrub it away. Finally her husband took matters into his hands and, taking an ax to the floor, replaced it with a new cement one.

The image formed again, and was said even to change positions.

And soon there was more than one — a cluster of them, sometimes disappearing, only to be replaced by others, including the visages of women and children.

Officials intervened (it had become a local sensation) and when the kitchen area was excavated skeletons, some headless, were found ten feet below.

They were dated to seven hundred years: For some reason (perhaps looking for prayer, or at least dignity), they seemed to be calling out from the beyond. Or was it all sinister? Tests of the concrete by the Instituto de Ceremica y Vidrio could find no evidence of any pigment, dyes or paint used, which ruled out a hoax (allegedly).

We report. You discern. The world is certainly mysterious, and everywhere we live, there is the need of prayer; one never knows what has transpired on property, when even in America, ancient people, in the case of North America, paleo-Indians, have been around for tens of thousands of years. In Europe are many places where unsettled souls seem to roam.

Crimes or rituals or tragedies may have occurred in the past. We always suggest regular blessings of property and use of blessed salt (see at bottom, at the end of an explanation, for one salt blessing). In this way do we  deliver a place as well as ourselves.

“There is a renewed interest today in the ancient sacramental of blessed salt, especially by charismatics, in healing and deliverance situations, etc. To understand its proper use and its efficacy, it would be helpful to review the Scriptural symbolism and its history, since Vatican II urges us to participate “intelligently and actively” in the use of sacramentals, just as in the use of Sacraments.
Salt in the ancient world was a precious commodity (even monopolized by the royalty in Egypt and Persia). Roman soldiers were partially paid with packets of salt (“sal” in Latin); this was the origin of our word “salary” and of phrases like “worth his salt,” etc. Being costly, it was an appropriate offering to God as a “covenant of salt” (Lev. 2: 13; II Chron. 13:5; Num. 18:19) used in sacrifices by the Isrealites (Ezek. 43:24) and for the accompanying sacrificial meal (Gen. 31:54).

“Belief in its preservative and healing properties led to its use to dry and harden the skin of newborns (Ezek. 16:4) and to prevent umbilical cord infection. Used for 3500 years to preserve meats from deterioration, it became a symbol of preservation and spiritual incorruptibility that was to characterize anyone offering sacrificial worship. Shared at the sacrificial meal, salt became a symbol of friendship and hospitality, a custom-symbol still used today in Arab culture.

“Jesus referred to this salt-symbolized friendship covenant in Mark 9:50: ‘Have salt in yourselves and be at peace with one another’–that is, ‘preserve that quality (flavor) that makes you a blessing to one another. (Note the double symbol of preservation and flavoring.)

“This double primary symbolization is also found in Paul’s advice in Col. 4:6: ‘Let your conversation be always full of grace, seasoned with salt, so that you may know how to answer everyone.’ That is, let it be wholesome and savory, preserved from the corrupting conversation of worldlings (3:8 and Eph 4:29). (His use of the word salt may also have referred to another of its symbols: spiritual wisdom, since the Latin word for savor or taste, ‘sapientia,’ is the same as for wisdom.)

“Some or all of these symbols may have been implied in Jesus’ words to his chosen ones, describing them as the ‘salt of the earth’ (Matt. 5:13). He especially indicated that they were to oppose the world’s corruption, reminding them that, as salt must preserve its own anti-corruptive quality, they too must preserve their anti-corruptive influence in a sin-corrupted world. (See Luke 14:34).

“The blessing promised by God on food and water, as well as the prevention of miscarriages and agricultural catastrophes (Exod. 23:25-26) was extended by God through Elisha in Jericho (II Kings 2:20-21), when he was inspired to put salt into the contaminated water. Adding salt to already brackish water to decontaminate it, made the miracle all the more impressive, since one would expect the opposite effect. This first miracle of Elisha is the primary Scriptural basis for the sacramental use of blessed salt today, as the Roman Ritual indicates.

“As a Catholic sacramental, salt blessed by the liturgical prayer of a priest may be used by itself, unmixed, as in exorcisms, and formerly in the exorcistic prayer at baptism, or it may be mixed with water to make holy water, as the Ritual prescribes (reminiscent of Elisha’s miracle). In whichever form, it is intended to be an instrument of grace to preserve one from the corruption of evil occurring as sin, sickness, demonic influence, etc.

“As in the case of all sacramentals, its power comes not from the sign itself, but by means of the Church’s official (liturgical, not private) prayer of blessing–a power the Church derives from Christ himself (see Matt. 16:19 and 18:18). As the Vatican II document on the Liturgy states (art. 61), both
Sacraments and sacramentals sanctify us, not of themselves, but by power flowing from the redemptive act of Jesus, elicited by the Church’s intercession to be directed through those external signs and elements. Hence sacramentals like blessed salt, holy water, medals, etc. are not to be used superstitiously as having selfcontained power, but as “focus-points” funneling one’s faith toward Jesus, just as a flag is used as a “focus-point” of patriotism, or as handkerchiefs were used to focus faith for healing and deliverance by Paul (Acts 19:12).

“Thus used non-superstitiously, modest amounts of salt may be sprinkled in one’s bedroom, or across thresholds to prevent burglary, in cars for safety, etc. A few grains in drinking water or used in cooking or as food seasoning often bring astonishing spiritual and physical benefits, as I have personally witnessed many times. As with the use of Sacraments, much depends on the faith and devotion of the person using salt or any sacramental. This faith must be Jesus-centered, as was the faith of the blind man in John 9; he had faith in Jesus, not in the mud and spittle used by Jesus to heal him.

“In light of this, we can see why Vatican II states that “there is hardly any proper use of material things which cannot thus be directed toward the sanctification of persons and the praise of God.” (art. 61 of Liturgy document). Hence new sacramentals may also be added when rituals are revised (art. 79). Blessed salt is certainly not a new sacramental, but the Holy Spirit seems to be leading many to a new interest in its remarkable power as an instrument of grace and healing.
Any amount of salt may be presented to a priest for his blessing, using the following official
prayer from the Roman Ritual:

“Almighty God, we ask you to bless this salt, as once you blessed the salt
scattered over the water by the prophet Elisha. Wherever this salt (and water) is
sprinkled, drive away the power of evil, and protect us always by the presence of
your Holy Spirit. Grant this through Christ our Lord. Amen.”]

[resources: Michael Brown retreat, Omaha  and The Spirits Around Us] 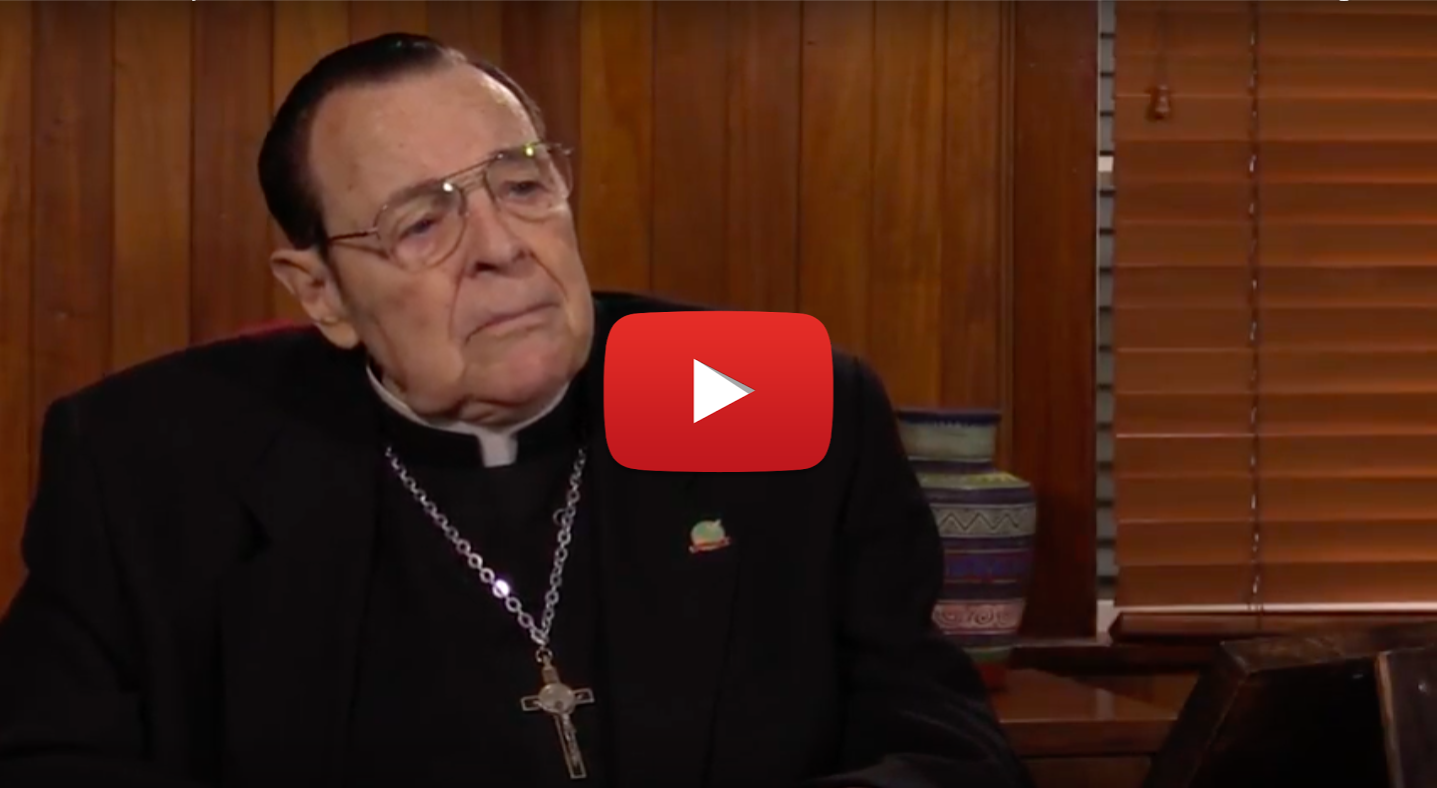