To say that Jeff Fusco was on the ropes would be the classic, epic understatement.

For all practical purposes, he was dead.

Fusco, at the time an executive vice-president at GBS Corp, in North Canton, Ohio (a high-tech productivity firm), and a parishioner at Immaculate Heart of Mary in Austintown, had contracted an especially severe strain of coronavirus. He speculates it was from one of two sources: a fundraiser for the local women’s league at a church hall two weeks before he became ill (they later learned that several there had been infected, one passing away), or, before that, on a plane back from a wedding in Charleston, where on landing at Pittsburgh a medical emergency had been declared and passengers were to wait as a desperately ill man who had been just several seats behind him was taken off the jet. “He was literally leaning right at me on the way out,” Jeff told Spirit Daily. Did he have covid?

Not long after that fundraiser, the 57-year-old executive — who had two significant underlying conditions (multiple myeloma and leukemia) —  started feeling “beat up and tired” and one day broke out in a “weird,” drenching sweat.

That Friday, he and wife Theresa were out to dinner with some friends. He woke up the next morning, March 21, “feeling sick,” and by Tuesday was “delirious and not eating.”

Finally, he went to an emergency room, and when they asked, upon entering, if he was okay, he said yes but then “I just fell over.”

Revived, the speculation was that it was just dehydration and medical personnel wanted to send him home. His wife insisted they not. This was at a hospital in Youngstown in the Mercy Health system. “By next day, we knew I wasn’t coming home,” says Fusco. “I was admitted, and covid just took over from there. My version was extremely bad. It infected every organ.”

When Jeff says bad: a temperature of 104 for two weeks and a ventilator for three.

The business executive ended up in three different hospitals, including, via helicopter, Ohio’s legendary Cleveland Clinic, and by the time it was all over and done, an estimated hundred doctors had some sort of role in treating or observing him back in those early days when medical professionals were desperately trying to figure the virus out. “This wasn’t ‘fake,'” says Fusco. “This wasn’t the flu. This was an entirely different animal.”

So different, says the former executive (he’s now retired due to the illness), that he seriously wonders if it was something from a laboratory.

At any rate, in the end, he didn’t get out of the hospital until May 16 — nearly two months after he took seriously ill — and after the virus had damaged the epithelium of his blood vessels and his digestive tract to the point where over the course of his hospitalization, he’d lost an unheard-of five gallons of blood. Covid had  “shredded” his intestines.

But there were those praying for him. His mother had created a Facebook campaign for prayers — garnering thousands doing just that — and his wife, a devout Catholic, held a Cross and refused to let him die. She set up a little “chapel” in their home and prayed without ceasing.

“I was packed in ice, my kidneys failed, my heart was slowing and going into arrhythmia, liver, all functions were stopping,” said Fusco. He was on dialysis; he had both a breathing and feeding tube. I had three or four surgeries.”+

Said an entry on his mom’s Facebook page: “I’m sorry to say this but Jeff is in a very, very bad place right now. He started bleeding again late yesterday afternoon. Again they transfused him all night. They took him for a scope this morning and then decided he had to go back for the same procedure he had done on Sunday. The dr. is trying to see if he can do something along with what was done then. If this doesn’t work the next thing would be a very major surgery and they don’t feel that Jeff will survive that because of how critical he is.”

“When I got really bad just before Cleveland Clinic and was slipping away, they called home to tell them they better come to say their goodbyes and that night is when it happened.
++
“My parents came [as in a vision] and said, ‘we know you’re fighting too hard; we just want you to know it’s okay if you want to go,'” he recalls. “My wife appeared and she was crying. There were ‘I love yous,’ goodbyes — if you want to go, go.” But where, he wondered, should he go?
+
“My father said, ‘talk to Him’ — and suddenly I felt like I was in the arms of God and God said, ‘It’s okay if you want to come home with Me. It’s up to you. You’ll do good things for me here and you’ll do good things when you come home.”“
++
“I was trying to look over His Shoulder.
+
“What did He look like?
+
“I was caught up in the moment. I was at total peace and comfortable, in His Arms. It was like there were Heaven’s gates behind Him and it looked so nice. He asked what I wanted to do.
+
“I said, ‘Is it really okay? If it’s okay, I’ll stay [on earth],'” Fusco further relates. “‘Is it really okay?’ I asked.”
+
It was almost like He was chuckling, says Jeff.
+
“Yes, it will be okay. You’re okay either way.”
+
“I said, ‘Then I’ll stay.'”
+ 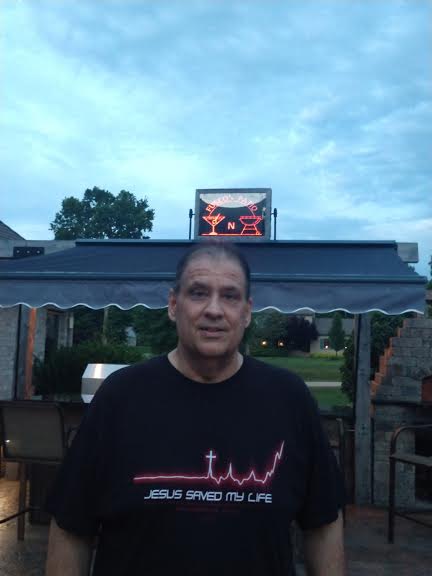 And suddenly — as two nurses were on the phone speaking with Theresa — “everything turned better. “I was transferred to Cleveland Clinic. Up there — about one-and-a half months into this — I was taken into ICU and people were working on me. I really wanted to just go home, get out of there now. An old-school nurse came and prayed with me and that night, at three a.m., the evil one came.
+
“It was about three o’clock in the morning — everything’s weird with threes — and I was thinking, ‘how can I get out of here,’ the days were just running together, and this super well-dressed guy with a dark complexion, shiny black-gray suit, dark thin square-framed glass — real businesslike — appeared; I thought it was the CEO of the hospital.
+
“‘Listen,’ he said, ‘so you want to get out of here?'”
+
“Now?”
++
“The way he looked, it felt like I was talking to the CEO of the hospital. ‘Yeah, I can get you out of here right away,’ he said, ‘but you just have to help me a little.’
+
“Help him?” says Jeff. “That seemed strange. Like what, I wondered.”
+
“First thing,” said the stranger, “just stop talking all this God nonsense to the nurses.”
+
“I said, “Oh, I know who you are.”
+
He wouldn’t say who he was.
+
“‘I don’t want you to have anything to do with me,’ I said. ‘Just go.’ And he left.”
+
Right after, there were suddenly more medical issues — necessitating two more blood transfusions. “Oh, he’s doing this to me,” thought Jeff. And that night — again around three a.m. — “he comes back and says, ‘Oh, you’re sick again, huh? Have you had time to think about it? Do you want to get out of here? Do you want my help?’“
+
Once more, Fusco said he wanted nothing to do with the mysterious visitor, that thousands were praying for him, and that he didn’t care if he lived or died; he just wanted nothing to do with evil. “And,” says the former executive, “this guy sort of evaporated — faded away as he walked.”
+
Was this a dream — a hallucination?
+
“I felt vividly aware and awake,” insists Jeff. “It had awakened me. The last thing that happened that seemed incredible to me was the day I was ready to be released, there was an African-American gentleman who used to clean the room, and he would always hum. I would just watch him working and I would say hello and he wouldn’t really answer, just was humming.
+
“This time, he came over, right up to my bed, looked straight at me, like two or three feet from my face — I felt God was looking at me — and he said, ‘Just keep the faith. Keep the faith. God has a plan for you.'”
+
Hundreds gathered at a parking lot near his home to greet him upon release.
+
Victory, in God. In resisting the devil. In Jesus. 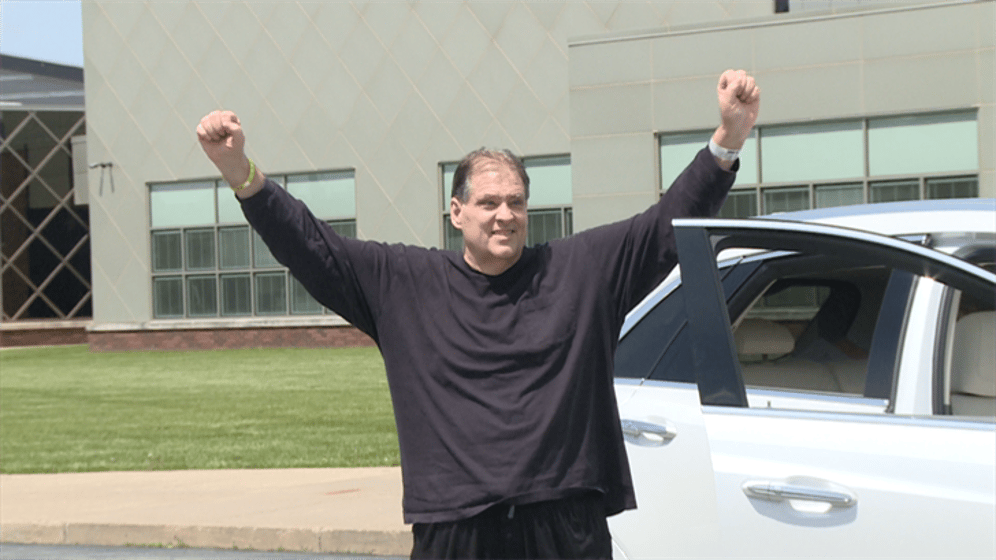 And so is the account, in these pandemic times, of Jeff Fusco. Take covid seriously. But know God is there and can do anything.
+
When a doctor on the original team at Mercy came to see him, the doctor, says Fusco, was overcome with emotion, including disbelief. He wrote “miraculous recovery” in the official medical log.
+
“Jesus is the One Who saved you,” said the doctor. “There’s no medical reason you should be here.”
+
But there were certainly supernatural reasons.
+
Fusco had a mission and at least part of it, it seems, was to tell his story.
+
ShareTweeteMail