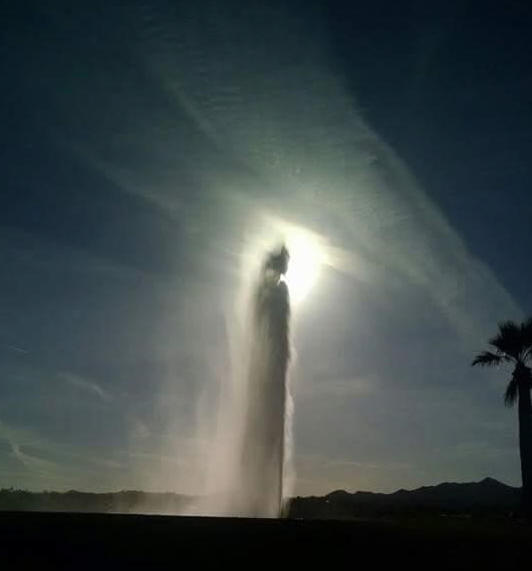 Let’s take a gander at the mail, first from Maggie Skjerping in Arizona, who sent us the photo above as well as the comparison to the left. 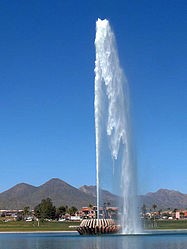 “Thought you might like to include the attached photo of what was once the world’s tallest fountain going off last Easter Sunday for the Christian Sunrise Service in Fountain Hills, ” she wrote. “If you wish to see what the fountain usually looks like you can google Fountain Hills and it will show it there.”

As indeed it does. Let us know, Maggie, if anything of similar moment occurs this Sunday. Surely it will — at least, interiorly, where it counts so much.

Does that mean Heaven can’t indicate through them?

“After CCD, which is held in the Parish Center, I walked over to the church to go to Confession,” writes Barbara Yanchek about  St. Thomas Aquinas in Archbald, Pennsylvania.

“My sister, Diane Zindell, saw me walking up the steps of the church and she happened to look up and saw the rainbow.  She said that the pictures do not do it justice, it was the most vibrant rainbow she had ever seen.”

It does frame the church nicely, after quite a bit of trial (the church recently suffered collapse of its ceiling, to the tune of $1.9 million, and now is repaired). A beautiful church inside as well [view a panorama]. When artists are inspired, this, in its way, is also “supernatural.” God restores. Don’t you wish — if nothing else, as a point of comparison — that we had photos of the “coincidental” rainbow Noah beheld?

“I wanted to tell you that when my brother was diagnosed with lung cancer last year,  we were introduced by a friend to St. Charbel,  just as his relics were touring past Utica ,New York and the Maronite Catholic Church there,” writes Margaret Ingraham of Syracuse. “We decided to take the day off from work and go.  It was incredibly moving for all of us,  and was the beginning of our devotion to this great saint.

“Fast forward to this winter, and my continued prayers for St. Charbel to intercede both for my brother and my ailing parents.  My father had a miraculous last two months of his life that would take too long to explain,  but he passed away peacefully on December 20th at the age of 94. My mother (90) is still alive, with the same disease that he had, which was Alzheimer’s Disease.

“So a few Sundays ago,  I took the oil I had from the monastery in Lebanon and I blessed my brother asking St. Charbel to intercede for him. Then,  I blessed my mother and asked the same.   My brother and the caregiver for my mother both had to leave the house at that time.  So I stood behind my mother, and kind of massaged her head, while she was sitting in her chair in the family room. I looked up, and towards their bookcase and my breath was taken away at what I saw. See what you think [above, left]!

Better to believe than not to believe, a Pope reportedly once said.

Faith and inspiration: not known to grow in cynicism. 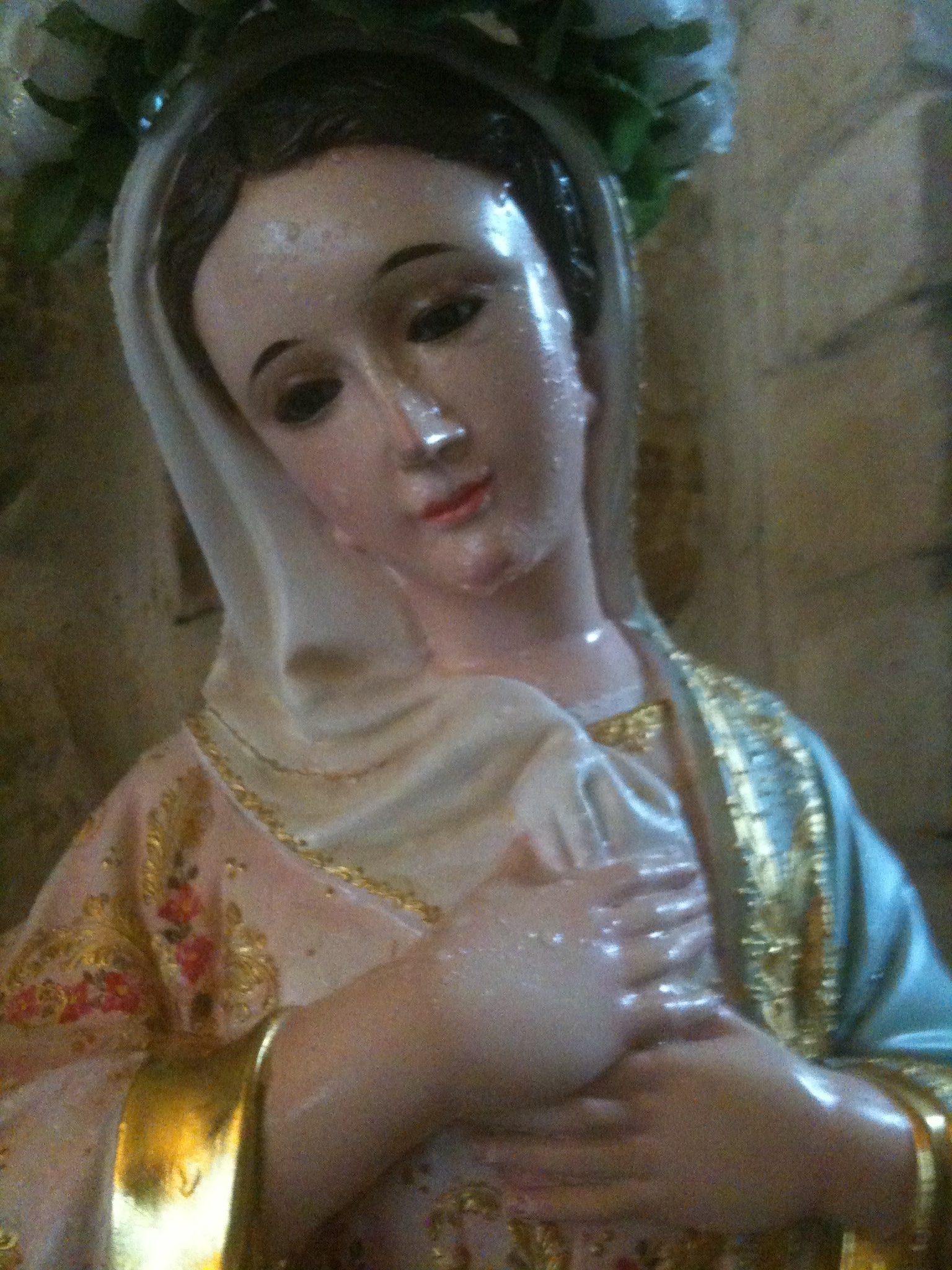 “Just want to share with you the miracle still going on with our Blessed Mother’s Statue.,” writes Roger and Lilia Bautista from Texas. “When we first got the statue of our Lady of Mt. Carmel, her face was not as pretty as this one. She transformed. Then lately, someone took a picture of her again. and this time, both Mama Mary and Jesus looked down. He made this picture into prayer cards with Our Lady of Mt. Carmel novena at the back.

“The other statue, the Immaculate Concepcion also changes facial expression from time to time,”they further explain. “When she first started to exude oil in 2010 many witnessed she closed her eyes then her color changed to a flesh tone. Both statues started exuding holy oil in 2010 and still doing it up to the present time. Weeping icons and statues at the Holy House of Tears in Houston are still giving us abundant supply of holy oil for healing. As you always say, for your discernment. Praise God. God is good! All the time!” 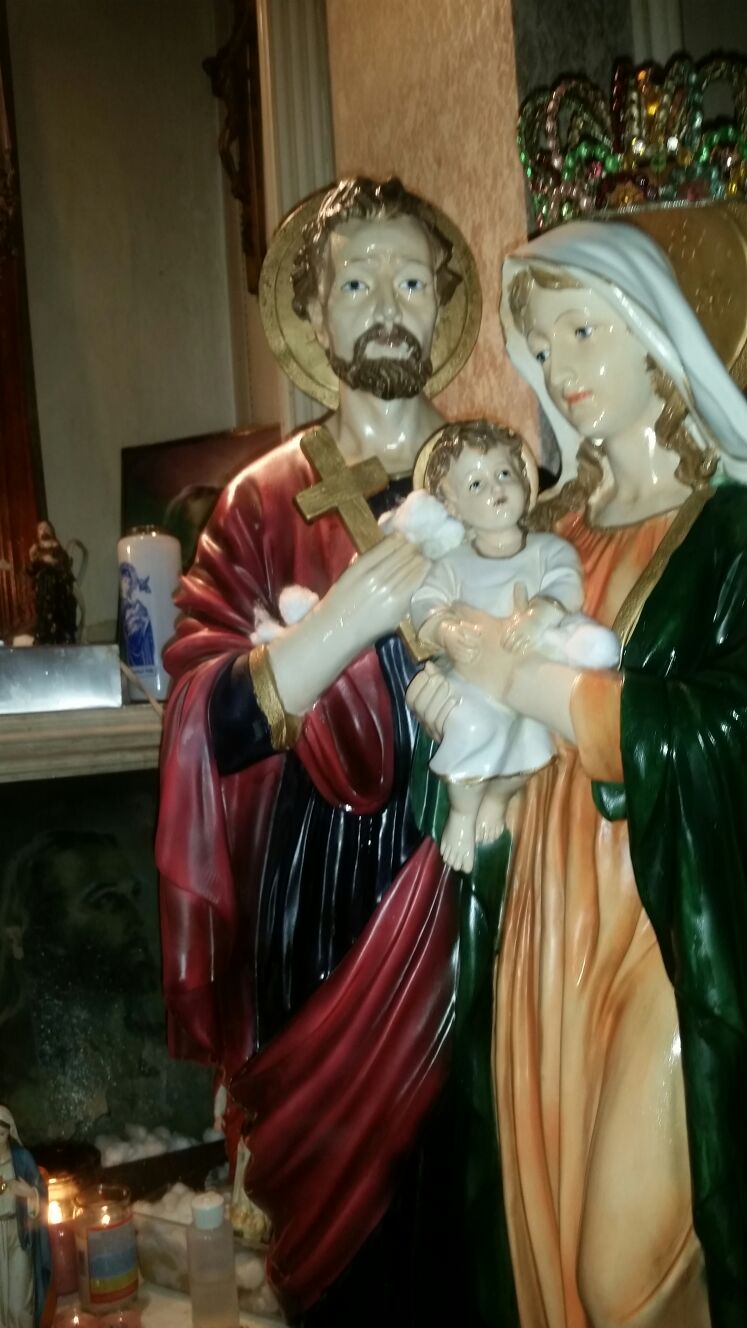