You’ve perhaps heard about the “Flame of Love.” That’s a devotion, of course — and a powerful one, especially during Lent.

But here’s a question:

Have you ever heard of “incendiary amoris” — what might be called “fire stigmata”?

That, we are told, is an actual flame of love!

And strange as it may seem, it was known to saints and mystics through the ages, including recent ones.

You heard that right: actual heat and sometimes fire would erupt in or from their bodies, as blood does in “normal” stigmatic wounds, and their bodies would experience blazing interior temperatures.

Scientifically, they call it mystical “thermogenesis.”

In a book called Ablaze!, Arnold, among a myriad of other cases, cites historical examples of holy Catholics who have experienced the alleged manifestation. It seemed especially prevalent in the sixteenth and seventeenth centuries.

Some were said to have been so imbued and energized with holy love that “in the coldest winter weather they’d throw off their stiflingly warm clothing, fling open windows to gasp for frigid air, and pant to cool their bodies.”

Religious passion so affected Saint Stanislaus Kostka (who died in 1568) that, according to a biographer, “he was obliged to apply cloths dipped in cold water to his breast in order to temper the violence of the love he felt.” (Asked what was wrong, the saint replied simply, “I am burning, I am burning.”) When we burn with love on earth, it seems, this lessens what we need to “burn off” in that intermediate state called purgatory. 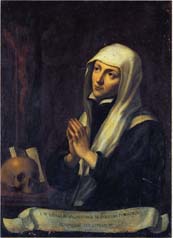 During her ecstasies, the hands of Venerable Osola Benincasa (who died in 1618) became so hot that — it was claimed — water boiled and steamed in a vessel when she dipped them in to cool off. At times, white smoke was said to issue from her throat.

Saint Catherine of Genoa (who died around the same time — 1655) exhibited both regular stigmata and incendium amoris. Eruptions of “extraordinary heat phenomena” were said to torment her, with white smoke coming also from her throat, “as if ascending from a brazier lighted within.”

So pure was the great love Saint Catherine had — the passionate, “hot” love — that her corpse was warm for days after her heart stopped beating (a medical impossibility, of course).

So hot inside was a Dominican nun named Maria Villani that amazed witnesses in Naples once claimed they could hear “a hissing sound like that of water falling on a sheet of red-hot iron” when she drank water, consumed as she was “by an almost insupportable flame of love.”

Can you imagine loving God to that extent!

After Communion, the face of a mystic, Venerable Serafina di Deo, would glow with a red flame while her eyes seemed sparked by fire. Such was also depicted in relation to Saint Philip Neri. We hear Padre Pio experienced mystical heat, although we’re not yet conversant with the details in his case).

Hard to believe. But too many cases to ignore. There was a Franciscan nun, Arnold points out, from whose stigmatic side wound emanated hot blood. Here we see the two types of alleged phenomena dovetailing.

In 1798, it was reported that a three-inch Cross spontaneously burned itself into the flesh of Anna Catherine Emmerich, and her skin blistered and oozed an extraordinarily hot, colorless fluid.

An abbess named Venerable Mother Beatrice Mary of Jesus was said in an ecstatic state to have spewed ashes.

In Church-approved messages received by Elizabeth Kindelmann — a stigmatic “victim soul” from Budapest who received years of what are now called the “Flame of Love of the Immaculate Heart of Mary” — was this (from Jesus): “Renounce yourself, for we have a great mission for you. You’ll only be able to do it if you completely renounce yourself. You are free to choose. You will accomplish it only if you want.”

Said the Blessed Mother (allegedly): “Take this Flame… It’s the Flame of Love of my love. Ignite your own heart with it and pass it on to others!”

“This Flame full of blessings springing from my Immaculate Heart and that I am giving you must go from heart to heart,” added Mary, allegedly. “It will be the Great Miracle of light blinding Satan. It is the fire of love and concord. I obtained this grace on your behalf from the Eternal Father by virtue of the five Blessed Wounds of my Divine Son.”

It was the contention of this Hungarian mystic that the Lord told her whoever fasts on Mondays “with bread and water while referring to the Flame of Love of the Immaculate Heart of Mary delivers the soul of a priest from purgatory. Also, he who follows that prescription will receive the grace, during the octave following of his death, to be delivered from purgatory by My mother.”