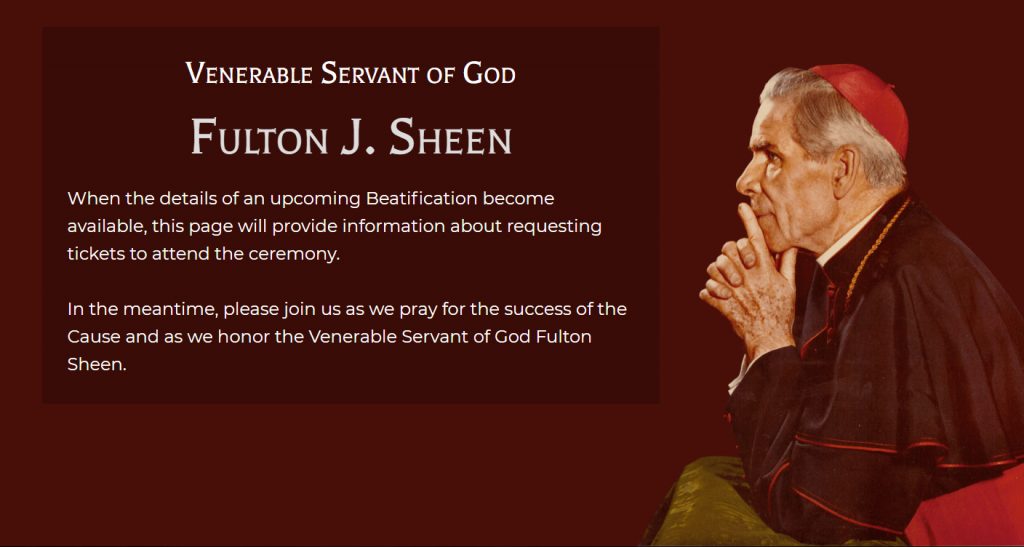 PEORIA, IL: It is with great joy and thanksgiving that the Most Reverend Daniel Jenky, C.S.C., Bishop of the Diocese of Peoria, Illinois announces that he received notification from the Vatican today that the Holy Father, Pope Francis, has called for Venerable Servant of God Fulton J. Sheen’s Beatification on December 21, 2019.

Confirmation of Sheen’s Beatification date was received with enthusiasm, and plans for the Beatification are already underway. The Beatification Ceremony will be held at 10:00 a.m. on December 21, 2019, at the Cathedral of St. Mary of the Immaculate Conception in Peoria, Illinois. This is the same Cathedral where Sheen was ordained a priest 100 years ago on September 20, 1919. It seems entirely fitting that the Beatification will take place at the end of this 100-year anniversary of his ordination to the priesthood. The Cathedral is also the current resting place for Sheen, who is entombed in a marble vault next to the altar where he was ordained.

Further information regarding the Beatification will be released in the next few days. Information about the Cause for Beatification of Fulton Sheen can be found at celebratesheen.com. Peoria, Ill., Nov 18, 2019 / 02:42 pm (CNA).- The Diocese of Peoria announced Monday that Venerable Fulton Sheen will be beatified Dec. 21 at the city’s Cathedral of Saint Mary of the Immaculate Conception.

Sheen had been ordained a priest of the diocese in that cathedral Sept. 20, 1919. “It seems entirely fitting that the Beatification will take place at the end of this 100-year anniversary of his ordination to the priesthood,” the Peoria diocese stated Nov. 18.