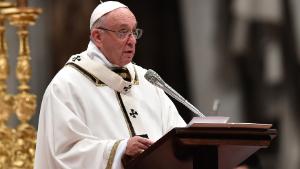 Pope Francis released a message condemning “fake news,” saying that it’s a “sign of intolerant and hypersensitive attitudes, and leads only to the spread of arrogance and hatred.”

The Vatican says the message is part of the Pope’s World Communications Day, but some at St. Peter’s Square say the Pope was probably sending a message to Donald Trump and other world leaders who have been using the phrase “fake news.” The tragic history of human sin, the Pope says in his message, is the first “fake news” and it dates back to the book of Genesis, when the “crafty serpent” lied to the woman. In present day, according to the Pope’s message the fast digital world helps fuel the spread of “fake news” — which he defines as “the spreading of disinformation on line or in the traditional media.”

From the Catholic Herald:

People have a responsibility to check the source of what they share on social media to ensure it is not “fake news” designed to further prejudices or increase fear, Pope Francis said.

Fake news grabs people’s attention “by appealing to stereotypes and common social prejudices, and exploiting instantaneous emotions like anxiety, contempt, anger and frustration,” Pope Francis wrote in his message for World Communications Day 2018. The message is a reflection on the theme, “‘The truth will set you free.’ Fake news and journalism for peace.” World Communications Day will be celebrated May 13 at the Vatican and in most dioceses. The papal message was released at the Vatican on January 24, the feast of St Francis de Sales, patron saint of journalists.