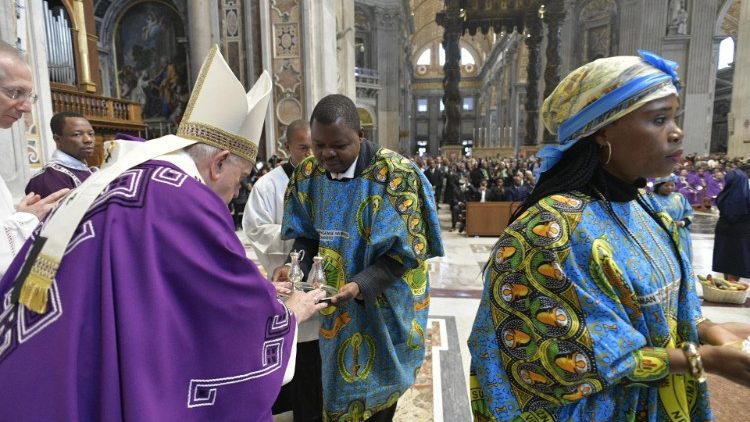 Pope Francis celebrates Mass in St. Peter’s Basilica on Sunday for the Congolese community of Rome, praying for peace in the Democratic Republic of Congo and denouncing those who enrich themselves through the arms trade.
+

The first Congolese Catholic Chaplaincy was established in Rome exactly 25 years ago. To mark this anniversary, Pope Francis celebrated Holy Mass, according to the Congolese rite, at the Altar of the Chair in St Peter’s Basilica, on Sunday morning. Members of the Congolese Community from Rome and beyond animated the celebration with their singing.

The meaning of Advent

This Sunday is also the first Sunday of Advent. In his homily, the Pope highlighted the verb that recurs three times in this week’s First Reading, and again in the Gospel: the verb “to come”.

Advent means coming, said Pope Francis: “The Lord is coming. This is the root of our hope: the certainty that God’s consolation comes to us in the midst of the troubles of the world. Not a consolation of words, but of His presence among us.”

“Today the verb to come is not only for God but also for us”, continued the Pope. Turning to the First Reading from Isaiah, he indicated how the prophet offers a wonderful vision of people coming together to the mountain of the Lord. Isaiah sends us an invitation from God to come to His home.

Addressing the Congolese Community directly, the Pope recognized how they have come from far away: many have left their homes and their loved ones. He acknowledged the difficulties they have had to face. “However, with God you are always welcome”, he said. “For Him we are never strangers.”

The Lord comes and invites us to go to Him, continued Pope Francis, but some say “no” to His invitation. It is the “no” about which Jesus warns us in the Gospel, urging us not to do as in the “days of Noah”.

All people could think about then was eating and drinking. In other words, said the Pope, “they reduced their lives to their needs, they were content with a flat, horizontal life, without momentum.” They were content to consume.

The virus of consumerism

Pope Francis described consumerism as “a virus that attacks the faith at the roots”, because it makes us believe that life depends only on what we have, so we forget about God. “Even if the Lord comes, you just follow the appetites that come to you”, he said. The real danger is that which anesthetizes the heart, added the Pope, letting ourselves be burdened and dissipated by our needs.

Things are never enough, said Pope Francis. “Our houses are filled with things but empty of children”, he said. “This is the demographic winter we are suffering”, he added. We have no time for God or for others. Our greed grows and others become obstacles, so we end up feeling threatened, always dissatisfied and angry, raising the level of hatred.

“We see it today where consumerism reigns”, said Pope Francis: “The world is full of weapons that cause death, yet we do not realise that we too continue to arm our hearts with anger.”

The verb “to watch”

Jesus wants to awaken us, continued the Pope, with the verb “to watch”. In order to keep watch, we must have hope that the night will not last forever, that dawn will soon come.

“We must overcome the temptation that the meaning of life is accumulation”, he said. We must “resist the dazzling lights of consumption, which will shine everywhere this month.” Prayer and charity, he added, are truly “the greatest of treasures.”

The gift of peace

When we open our hearts to the Lord and to our brothers and sisters, said Pope Francis, we gain the most precious gift that material things can never give us. The gift Isaiah announces in the First Reading: peace. This makes us think of your homeland (the Democratic Republic of Congo), said Pope Francis.

A prayer for peace

The Pope concluded by recalling Blessed Marie-Clémentine Anuarite Nengapeta who, like Jesus, forgave her executioner.

Through her intercession, said Pope Francis, we pray for combatants to give up their weapons, for a future that no longer puts one against another, but one together with another. We pray for conversion from an economy that makes use of war, to an economy that serves peace.