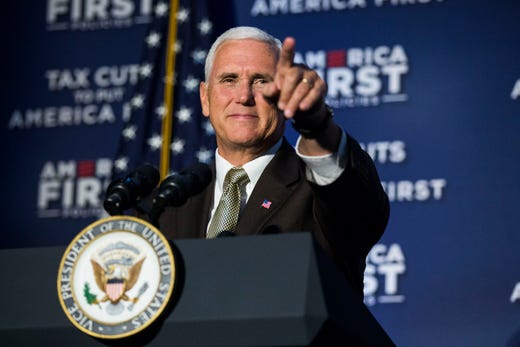 WASHINGTON — Vice President Mike Pence turned to the Bible when asked recently what he makes of a new critical biography that calls him as a “Christian supremacist.”

“The Bible says count it all joy when you endure trials of many kinds,” Pence told the Christian Broadcasting Network in an interview excerpt released Friday. “Any time I’m criticized for my belief in Jesus Christ, I just breath a prayer of praise.” In “The Shadow President: The Truth About Mike Pence,” that came out this week, authors Michael D’Antonio and Peter Eisner cast Pence’s background – congressman, Indiana governor, Trump VP – in a harsh light, arguing that “the most successful Christian supremacist in American history” is already functioning as a “kind of replacement president” and is preparing to “fashion a nation more pleasing to his god and corporate sponsors.”