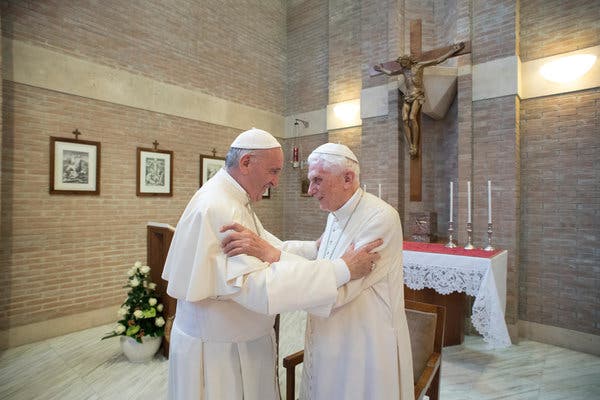 ROME — The remarkable letter last month calling on Pope Francis to resign for allegedly shielding an abusive American cardinal also served as a public call to arms for some conservative Catholics who pine for the pontificate of the previous pope, Benedict XVI. For years now, they have carried his name like a battle standard into the ideological trenches.

Benedict apparently would like them to knock it off. In private letters published on Thursday by the German newspaper Bild, Benedict, who in retirement has remained studiously quiet through the controversies over Francis’ fitness to lead the church, says that the “anger” expressed by some of his staunchest defenders risks tarnishing his own pontificate. “I can well understand the deep-seated pain that the end of my pontificate caused you and many others. But for some — and it seems to me for you as well — the pain has turned to anger, which no longer just affects the abdication but my person and the entirety of my pontificate,” Benedict wrote in a Nov. 23, 2017, letter to Cardinal Walter Brandmüller of Germany. “In this way the pontificate itself is being devalued and conflated with the sadness about the situation of the church today.”