Fascinating it is how two politicians — candidates for vice president of the United States — tell a tale of Catholicism.

It is not so good a yarn, but useful in pointing up major shortcomings in the modern Church, shortcomings that, if rectified, could set the faith on a new and fuller pace toward fulfilling the commission set before it by Jesus. 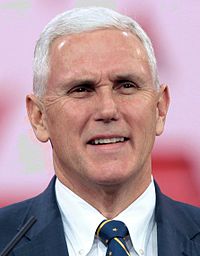 One of the candidates, Michael Pence, governor of Indiana, currently describes himself (as politicians are wont) as an “Evangelical Catholic.”

Actually he’s a former Catholic who for years went the route of evangelical mega-church-style worship and is now casting about for a permanent ecclesiastic home. Would but he return to Catholicism!

He tells a tale because in the U.S. and now South America there are so very many — millions — like him who have left the Church because they did not feel “fed,” did not feel the supernatural touch of Heaven, were looking for the laying on of hands that Jesus demonstrated (and instructed His disciples to do), or were in need of deliverance (in the way the apostles cast out spirits) and simply were searching for a place with a living faith (miracles, words of knowledge, what a segment of the Catholic Church call charisms of the Holy Spirit), but instead found an academic atmosphere.

Therein lies a problem: it is only a segment of the Church (those who go to Adoration, who practice First Saturdays devotions, who experience the Blessed Mother) that is exercising those first-century gifts of the Spirit, the spiritual exercises which were the Church before it became an institution (and overwhelmingly so, to the point where, recently, when Pope Francis was describing the resignation of Pope Benedict XVI, he described it as an “act of government”).

Indeed. Our religion, in too many sectors, is more governmental or academic than spiritual.

There are bureaucracies. The Vatican has its own secretary of state. It has ambassadors.

Instead of overt spiritual manifestations, the megillah of an algebra professor.

Some of it is needed. Some of it ministers to the world: that is, has become worldly out of necessary. We must speak the same language!

But too much, perhaps, especially in the U.S. Church, is governmental period. One could also say: academic.

Theology and canon law have triumphed over charisms, though one may be hard-pressed to visualize a fisherman like Peter in front of a chalkboard or quoting a motu proprio.

When one hears the Chair of Saint Peter described as the “Petrine Office,” this tells us everything.

And this is hard to reconcile with how Christ set about to minister.

It is what has chased so many into the arms of Evangelicalism.

Hispanic immigrants into the U.S. are now following the same path away from the Church, as they also are — in disconcerting numbers — in Brazil. Millions.

It must stop. Catholicism was equipped by Christ to minister to everyone. 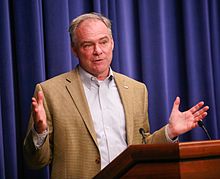 Then there is Tim Kaine, of Virginia. He’s the Democratic candidate for the nation’s second most important office — and also a Catholic, though in this case, a still-practicing one (the media likes to describe him, as they do anyone who goes to church, as a “devout Catholic”).

This is wonderful (as is the case with the current vice president, Joseph Biden, likewise a good man and a churchgoer), but for the fact that Senator Kaine believes in the right of abortion, is against having God into the public square, and is now comfortable with homosexual marriage (he has altered or even reversed certain earlier views to fit current politics).

As a pro-life website observes, “Kaine is personally against abortion and the death penalty and has sometimes spoken against same-sex marriage and gay adoption, all of which aligns with Catholic teaching.

But he has taken different stances in his political life. He has upheld Roe v. Wade and told Chuck Todd of “Meet the Press”: “I have taken the position, which is quite common among Catholics — I have got a personal feeling about abortion, but the right rule for government is to let women make their own decisions.”

This is a problem, Catholics feeling one way but tolerating egregious sin. “While Kaine opposed gay adoption in 2005 — also in line with Catholic Church teaching — by 2012 he had reversed his position,” noted the site.

“Moreover, Kaine has a perfect pro-abortion voting record in the Senate and has rejected attempts to defund Planned Parenthood.

Kaine also is a co-sponsor of the Women’s Health Protection Act.” Simply look at a chart that Fox News posted. Or read this article in LifeNews.

How many in our Church — with scales on their eyes, because the Holy Spirit is not around — think the same way, even though the Church describes abortion as killing; strenuously defends the right of Christians to express themselves openly (in accordance with the very foundation of this country); and describes homosexuality as a serious disorder which is “intrinsically evil”?

How a person can be a practicing Catholic and hold such stands tells us more about our shortcomings: the homilies that are way too long and pedantic, the lack of expression when it comes to such issues from the pulpit, and the simple fact that when the Holy Spirit is not alive enough in a congregation, there is, to repeat, spiritual blindness.

Remarkable it is how the scales on the eyes lift — when the Holy Spirit is present.

Deliverance? Many Catholics know so little about this that they don’t take it seriously, as evidenced a couple weeks ago when Vice President Joe Biden — sincere in attending Mass — said he was going to “work like the devil” to elect Hillary Clinton.

And so this is the task for our Church: diminishing idolatry of the human mind and bringing back the Holy Spirit.

If we, and our priests, and our bishops, did, Christianity would once more coalesce into a single unit (there would be no need for evangelical mega-churches) and Christianity would stand a fighting chance against the rising persecution of the Church at the hands of humanism and Islam.

[Check our main page for the latest headline news]