“As for the earth, out of it cometh bread; And underneath it is turned up as it were by fire” (Job 28).

There’s a good chance you’ve heard of it, that old coal town in eastern Pennsylvania that was abandoned due to an unstoppable fire in the mine beneath it. Smoke issues from cracks in what were streets; vegetation has died. A town of several thousand at last count had seven residents. 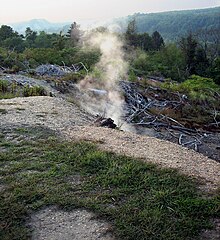 In the midst of utter devastation stands one of the only functioning non-residential buildings: a Catholic church. Amid ruins, with smoke all around — devastation — devotion is all that survived — and still does.

Notes Wikipedia: “Centralia was a hotbed of ‘Molly Maguires’ activity during the 1860s to organize a mineworkers union [often through violence] in order to improve wages and working conditions. A legend among locals in Centralia tells that Father Daniel Ignatius McDermott, the first Roman Catholic priest to call Centralia home, cursed the land in retaliation for being assaulted by three members of the Maguires in 1869. McDermott said that there would be a day when St. Ignatius Roman Catholic Church would be the only structure remaining in Centralia. Many of the Molly Maguires’ leaders were hanged in 1877, ending their crimes. Legends say that a number of descendants of the Molly Maguires still lived in Centralia up until the 1980s.

Other versions have the 19th-century priest, saying, “One day this town will be erased from the face of the earth.”

The true culprit, as notes a report, was likely more prosaic: a burning garbage dump in May 1962 that scorched through to the coal bed. 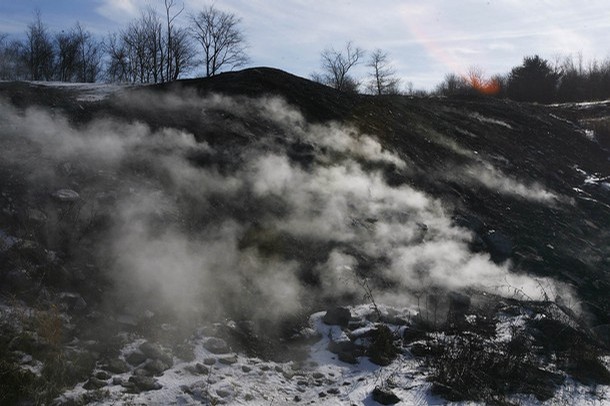 Attempts were made to stop the fire, including trench digging, it’s pointed out, “but flames migrated through old coal mine networks and the borders of the blaze were never contained.”

Like other buildings in Centralia, Pennsylvania — and despite the priest’s supposed prediction — St. Ignatius Church could not escape the mine fire that had begun in 1962. By 1981, the school had to be closed as parents feared carbon monoxide and other gases were sickening their children. The priest also left around this time and moved to Mt. Carmel out of concern for safety.

Says a website called Centralia: Even as the residents of Centralia left, Saint Ignatius continued to hold mass until the mid-1990s. At that time, there were too few parishioners to sustain it. The last service was on June 25, 1995. St. Ignatius Church remained standing until November of 1997 when it was finally razed.

Today the only reminder of St. Ignatius Church is the cemetery near where it once stood. Families and loved ones still visit, keeping it well-maintained. Though, the church and other buildings are now lost to history.

But a church — the Ukrainian Catholic Church of the Assumption of the Blessed Virgin Mary in this same town — does remain, with about fifty regular congregants and even annual pilgrimages that the church hopes this year will reach five hundred. 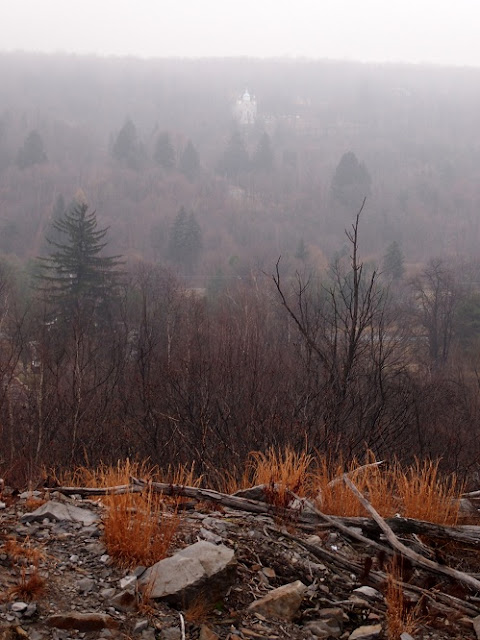 That’s the “Called to Prayer Marian Pilgrimage,” this year which occurred yesterday, August 26, with bishops leading prayers and offering reflections. Pilgrims participate in a living Rosary and venerate a historic jeweled copy of the Icon of Our Lady of Pochaiv, a miraculous icon in a monastery deep in once-Communist Ukraine (one we have visited).

Remarkably, as yet another outlet reports, tests around the church found that the structure was built on solid rock. There’s no coal underneath it and so no danger of the fire undermining the foundation. A metaphor for our times?

As a news site explains, “in late 2015, the head of the worldwide Ukrainian Greek Catholic Church, Major Archbishop Sviatoslav Shevchuk, toured the area. When he arrived in Centralia, he was ‘just amazed that people were relocated, the town was deserted, and yet at the top of the hill, Ukrainian Catholics still were ringing the church bells each Sunday, calling people to prayer,’ said [the priest there] Fr. Hutsko. ‘It was just a real, visible symbol that God remains with his people at all times, even through disasters, through desertion.'”

When Archbishop Shevchuk entered the church, high on a hill overlooking Centralia, he had a feeling that he was in a holy place, Fr. Hutsko said.

“I went on to explain about the number of vocations to priesthood and religious life originating among the families of the parish, and it just reinforced his feeling that there was a holiness there that can be easily touched and experienced, and that holiness led to these vocations,” the priest recalled.

Through trial, in the midst of flames, comes sanctity.