The most famous cases approved by the Church.

God produces miracles so that people who have faith can see His splendor, in a kind of consolation and anticipation of eternal life.

But today the miracles are being discredited, even by priests, who [in some cases] do not tolerate that the Lord is acting around them, making natural laws cease, without their participation.

Without faith, miracles cannot be seen, but they are necessary, in an adequate dose, to strengthen faith.

Obviously, faith cannot be sustained by miracles alone, nor depend solely on them, but they are like a viaticum for the journey, refreshing us along the way.

Here we will talk about five famous miraculous paintings of the Virgin Mary that came to life, approved by the Church, so that you can be sure that miracles, which cannot be explained by any other cause, exist.

When Jesus went to Nazareth during His ministry, He did not perform miracles, saying it was due to the little faith of the people there.

It is faith that causes miracles. Miracles are God’s response to people’s faith.

It is God’s astonishment at the trust of the people, and He repays it with the Grace of showing a miraculous event above the laws of nature, demonstrating where the true power lies.

Miracles are still seen today, though incomparable to the number of miracles that occurred when there was more faith in the world. [SD note: the views expressed are those of Forums]

And to show it, we chose five historically notorious cases of moving images that were approved by diocesan investigations.

Let’s start with the image of Our Lady of the Bowed Head, which was a miraculous painting found in Rome in 1610 by the venerable Discalced Carmelite Fray Domingo de Jesús María, among the rubble of an abandoned house.

The priest took the image to his cell, cleaned it up, and it became the object of his veneration.

On one occasion, kneeling before it to ask the Virgin for a favor, he realized that it still had traces of dust.

He cleaned it with a cloth, saying, “Oh, pure Virgin! There is nothing in the world that is worth touching your face to clean it. But since I have nothing better than this cloth, accept my goodwill.”

Then he saw that the head of the image, which had been erect before, had bowed in gratitude — and has remained in that position ever since. 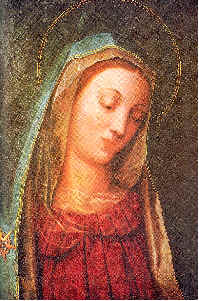 And he heard, “Do not be afraid, my son, because your intention was well received, and as a reward for the love you have for my Son and me, ask for a grace.”

Fray Domingo then asked that a deceased benefactor be released from purgatory.

And Mary promised to attend to his request, provided that a few more masses were celebrated for that soul.

And after a few days, she appeared to him with a redeemed soul.

The religious also asked that all those who venerate the image with devotion be treated with mercy.

To which the Blessed Virgin replied:

“To all those who venerate me with devotion before this picture and seek refuge in me, I will attend to their requests and I will grant them many graces; but I will especially listen to those who ask for consolation and salvation for the souls in purgatory.”

He then placed the painting for public veneration in the church of his monastery in Santa Maria della Scala.

In 1629 Fray Domingo settled in Vienna as an adviser to Ferdinand II, Holy Roman Emperor.

And from that place the painting continued interceding with miracles to the requests made by the faithful.

Another painting that moved was that of the Virgin with the Child that was in a church called Santa Maria next to San Celso, in Milan, which San Ambrose had ordered to be painted.

Detail of the Madonnina di S. Ambrogio and the Miracle.

It was a simple image of outline, protected by a simple fence, next to the tomb of Saint Celso. [scroll for more]

And if time faded the colors and contours, there was always someone to fix and brighten them.

It was a very popular image; pilgrims paid homage to it.

Suddenly, the almost blurred figure of the Virgin began to move before the 300 stunned people present.

First, lifting the veil that protected her, then, opening her arms, and finally, joining her hands.

And also the Child seemed to hint at a blessing to the faithful.

According to those present, there was an explosion of enthusiasm that lasted for days, the church was filled with supplicants, and a number of graces and healings were recorded.

Another famous case [allegedly] happened with the painting of Our Lady of Miracles by Corbetta, also in Milan.

It is a beautiful painted image of the Madonna seated on her throne with the Child on her lap.

On April 17, 1555, the Child Jesus left the painting and went down to the square to play with three children.

The Madonna, surprised by the Child’s escape, also went down to the square, to reprimand Him, like a good mother, and both went back up to the painting.

And from that moment the church became a place of pilgrimage and many were the miracles that followed.

That is why Pope Paul IV called her Our Lady of Miracles.

And in Latin America there are at least two famous cases. [scroll for more]

One is that of Our Lady of Chiquinquirá who came down from the painting on Friday, December 26, 1586, at nine in the morning.

It was a canvas in poor condition with the image of Our Lady of the Rosary, and on the right side it had Saint Anthony of Padua and on the left the Apostle Saint Andrew.

After spending more than two hours in prayer before it, Maria Ramos heard an Indian named Isabel say to her as she left, “Look, look.”

And she saw that the image of Our Lady was standing on the ground and giving off a light that filled the entire chapel with clarity.

Not only had the Virgin lowered to the ground, but the image, which until then had been dim and in poor condition, was completely renewed with very bright colors.

Our Lady appeared with a very flushed face and gave off great radiance that bathed the saints on her sides with light and filled the entire chapel with luminosity.

The renewal of the canvas was witnessed by all those who had dealt with it, and the commissions sent by the archbishop ratified the authenticity of the miracle.

And the closest miracle in time [of this particular list] happened on April 20, 1906, in the dining room of the boarding school of the Colegio San Gabriel de los Padres Jesuitas, in Quito, Ecuador.

The Image of Our Lady of Sorrows (pictured above)  flickered prodigiously and repeatedly for 15 minutes.

This event took place at the time of the liberal revolution of 1895 that had been advocating a secularism hostile to religious education.

It is a painting of the Dolorous Virgin whose heart is pierced by seven swords.

In the left hand are the three nails of the Crucifixion. With her right hand she presses the crown of thorns, slightly wrapped in a part of the mantle, against her chest.

Her face is very expressive; she shows deep pain and two tears slide down her cheeks.

Her eyes have an ineffable sweetness with a hint of sadness, kindness, and affection.

On the night of April 20, 1906, there were 36 children between the ages of 10 and 17 in the dining room accompanied by Father Andrés Roesch, Prefect of the College, and Brother Luis Alberdi.

The image was near the table of the three younger students, who saw how the image in the painting began to move its eyelids and open and close its eyes, expressively, as if it were alive.

They called the other children — who were incredulous but all witnessed the movement of the Virgin’s eyes, majestic, slow, sometimes the right eye, sometimes the left, sometimes both.

And the astonished children would say in chorus, “Now close…, now open…, now the left one, now the right one…, now both…”

They went to tell father and brother who were talking at another table.

But the father did not pay much attention, telling them not to talk nonsense, while Brother Alberdi approached coldly and skeptically, but was stunned by the movement of the eyes of the image in the painting.

And when the father arrived later, he said he’d thought it was an optical illusion and he retired to his table.

But prompted again by Brother Alberdi, he returned and saw the flicker so clearly that it gave him the sensation of chills.

Then a canonical process was carried out with a commission made up of several experts, including physicists and photographers who checked the lights, and doctors who examined the children, and the conclusion was that it was not the effect of a sensory illusion or collective imagination.

In 1956, on the 50th anniversary of the event, Pope Pius XII ordered the crowning of the image of Our Lady of Sorrows at the Colegio de Quito.

Well, so far we wanted to talk about five miracles of paintings of the Virgin Mary moving that had ecclesial approval, but there are many more.

And I would like to ask you what other miracles with images of the Virgin or other religious pictures moving do you know.