Are there truly strange exudations? Does God use “natural” phenomena in a way that is “supernatural”?

We once heard from a viewer named Sandie in Scottsdale who reported that:

“On my pilgrimage to the Holy Land in March of 2008 (during Lent ), there were 34 of us from Arizona and California. We had visited the Garden of Gethsemane and gone to the ‘Rock of Agony‘ church where Jesus prayed, cried, and sweat blood.

“The first time was very moving and sad for all of us, knowing what had taken place there so many years ago. We were able to come back later in the week on a Friday evening to spend time in prayer for a  Holy Hour that was especially arraigned for our group.

“At this time, some other women and I were able to lean over the little decorative barrier that encircled the rock, which allowed us to partially lay our bodies on it. After doing so for some time I decided to lean back and go sit in the bench directly behind me.

“As I sat on the bench for a while, looking, praying and meditating on this Rock and Jesus, I suddenly noticed a ‘glimmer’ of something that seemed to ‘shine’ over the area I was laying on.

“I  thought at first that it was just a reflection of light, since I did not cry, sob, or perspire while there. I went back to kneel at  the same area and investigate this ‘shiny damp’ spot.

“As I looked at this area of the rock, I noticed the ‘damp spot’ becoming larger and larger.

“At this point I was silent and  in awe and I sensed a tremendous stillness and peace surround me. I continued to watch.

“The rock is very lumpy and uneven and has little indentations that are common in all natural rock. In one of these ‘indentations’ the dampness had collected into a little pool of moisture — about 8″x 8” give or take an inch or two.

“I continued to watch and be still. I had placed my rosary and scapular about six inches from the spot when I first got there and at this point I slowly took these articles and placed  them in the little ‘pool of moisture’ on the rock. There were two other women who were in prayer next to me who’d also placed their rosaries, medals, and scapulars on it.

“I motioned with my eyes and subtly pointed for them to ‘look.’ They both peered at this ‘pool of moisture’ and then at me with their eyes wide and their mouths dropped open. I just smiled and pointed my finger to my lips to motion them to be silent.

“Just about then the group was preparing to leave since our Holy hour was over. The three of us were the last to leave, gathering up our articles and trying to contain our enthusiasm. All we could say was, ‘OH MY GOSH!’ 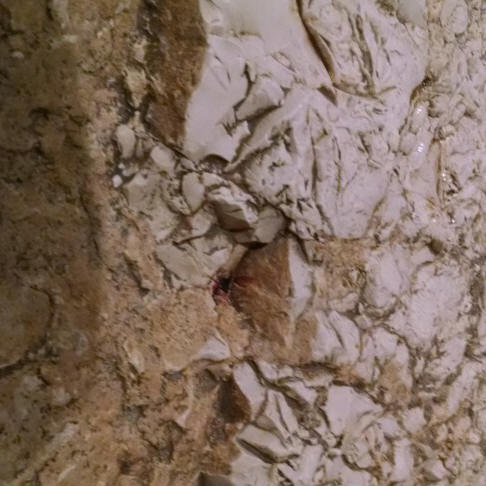 “As everyone left, the three of us remained in the church, kissing the rock, and blessing ourselves with the water from the ‘pool of moisture.’ There was still a bit remaining as we were leaving, since I  know we absorbed most of it as we hurriedly found more religious articles in our purses to place on this spot, we also continued to bless ourselves with it as much as we could. We thanked our Holy Lord for this great ‘gift’ and as we left, we just held onto each other and silently wept with tears of joy. He is always with us!”

The skeptic, of course, knows that rock may accumulate condensation. There can even be hidden veins of water. The believer knows that God uses nature and sends special feelings (feelings that can’t be captured in a test tube) with it.

And strange “poolings” of other liquids?

“I have witnessed olive oil exuding from statues, people, and holy pictures,” says a second viewer, Jack Manion of Kingston, Ontario. “I was told that Jesus had instructed us to use the oil to heal people. I asked a priest why olive oil and if it was okay to bless people with it. His advice was, ‘Traditionally olive oil is the sign of the Holy Spirit and it is used in the sacraments like Baptism, the anointing of the sick, and Holy Orders. Yes, it is okay to anoint sick people and pray for them. Just make sure that the people know that this is not chrism oil blessed by the Bishop at the Chrism Mass [on Holy Thursday].’ I did and still use the oil for the anointing of sick people. I have witnessed many healings but still I wondered why oil from statues? One day Jesus spoke to me saying, ‘Is it any more miraculous for oil to come from plaster than from wood?’ Then I understood. In these days of widespread disbelief and because of the lack of acknowledgement of our need for God in our lives, God has moved the supernatural gift of olive oil from the ‘natural’ place to the ‘unnatural’ that we might be aware and bear witness to others of God’s love and our need for His love, peace, and healing in our lives. In one home of which I am aware, oil has been coming from statues for over 13 years.”

For your considered judgment!