[adapted from Secrets of the Eucharist]

The moment we receive Christ in Communion or while we adore Him in adoration is something that can’t be purchased by even a billionaire. When we’re in front of Christ we’re at a spot far more exalted than any queen or king’s throne.

Mass and the Blessed Sacrament share the same history. The first Eucharist commenced at the Last Supper and afterwards early Christians practiced a meal of ritual character. They prayed and broke bread while they remembered Jesus.

By the middle of the second century the sacramental meal had become an independent rite, celebrated in conjunction with reading and preaching on Sunday morning. What we know today as the Mass was standardized in the period between the emperor Constantine in the fourth century and Pope Leo the Great, who died in 461. We are thus talking about a practice that is 2,000 years old and was directly inspired by Our Savior.

While there have been many changes in those 2,000 years, the essence of Mass has remained an invocation of Christ’s power. It’s the complete prayer. And it often starts with commemorating the dead. Souls in purgatory would give anything to be able to attend just one earthly Mass, now that they understand its tremendous underpinning. A single Mass can help a purgatorial soul unimaginably!

The dedication of the Mass is followed by the priest invoking the Holy Spirit. This is crucial because it is the Holy Spirit Who gives all gifts, Who empowers all grace, and Who thus should be invoked not just during Mass but on the way to Mass and much of the time we’re sitting in the pews.

Nothing comes from heaven without empowerment by the Holy Spirit, and when we invoke Him, He opens our spiritual eyes. He grants us knowledge we could never attain by ourselves. And it’s the Holy Spirit Whose presence is detected in a strong feeling of peace and grace.

The Holy Spirit is grace. When He comes during Mass, right there at the beginning, it reminds us how the dove descended from heaven and alighted on the head of Jesus when He was being baptized at the very beginning of His public ministry. It’s the Holy Spirit that empowers the priest and blesses him in a similar way. Priests are extremely powerful. Priests are standing in for Jesus. And that’s why Satan so often attacks them. They have hands and fingers that are consecrated. I would rather be touched by the blessed hands of a priest than any visionary or mystic.

I recall the account of a friend of mine who in 1992 had the tremendous privilege of sitting in at a meeting between the famous Fatima seer Lucia dos Santos and former President Corazon Aquino of the Philippines.

My friend told me that President Aquino had come to Portugal with a bag or two full of religious items. She wanted Sister Lucia to “bless” them.

The visionary was taken aback. Bless an object? No, said Sister Lucia; she could never bless anything. Only a priest could bless such items, and she referred them to a humble priest who was there serving was a translator.

We should share that appreciation. A priest’s hands are miraculous. They have real powers. It’s said that at night the thumbs and index fingers of a priest named Conrad of Costanza, who was a saint, used to shine as an indication of the faith and love with which he handled the Eucharist. It’s those same hands that bless us at the beginning of Mass as Jesus blessed near Bethany.

After the priest leads us in blessing, we invoke an indwelling of the Holy Spirit. We also acknowledge our failures and sins. The priest asks us to recall our transgressions, and when we do, when we conscientiously admit to our mistakes — large and small alike — we shake loose the grit of evil, because to acknowledge a fault or sin is to rebuke and bind a sin — which also means rebuking Satan.

It’s very important to boot Satan out of our way before we get into the deeper aspects of Mass, because otherwise he tends to divert or harass us, especially in our present time, when demons are so numerous and flagrant. Scripture compares this to binding a “strong man” (Matthew 12:29) and tells us that whatever is bound on earth “shall be bound in heaven” (Matthew 16:19).

In so doing, we also implore God’s Mercy. That’s one of the most important and forgotten aspects of Christ: His Mercy. This is extremely significant, because as St. Faustina said, God expresses His love in a most powerful fashion through His Mercy. God’s Love is His Mercy. We should invoke it and take refuge in it and know that when we seek mercy we are automatically dispelling evil influences.

In the very first minutes of Mass, we are thus blessed by the priest, we have invoked the Holy Spirit, we have repudiated evil influences, and we have tapped into the powerful force of mercy. It’s during Communion that we “snuggle close” to Christ’s Heart. When we do, when we approach Him with trust, He further promises to fill our souls with such an abundance of graces that we cannot contain them all and thus we radiate them to others. That’s why, after Mass, we feel clean and “white.” We are radiating. Grace is flowing in and out. I often glance at people who regularly attend the Eucharist, especially older women who have been going to daily Mass for many years, and I often notice a radiant cleanliness around them. They’re actually radiant.

It’s just such a radiance that serves as the best protection against evil spirits.

[resources: Secrets of the Eucharist] 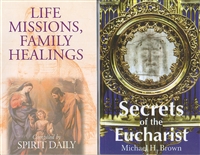