Want to get free?

Stop comparing yourself to others.

Want to breathe a permanent sigh of relief?

Stop worrying about what others think of you. Worry only about what God does.

Aim for what is above, not what is here below.

A priest was speaking about this the other day — how he finds it fascinating to sit in a public place like a restaurant and listen to what folks are chatting about — how much is worldly and how much spiritual: finding most of the time, of course, that it’s the former, superficial.

That superficiality is the “world.” That surficial view is the foe. And that view, so artificial, so very temporary, rejects our spirituality.

There is freedom in knowing this: that everything visible to the physical eye disappears soon and that rejection by the superficial components of life (because you are spiritual) is a badge of Heaven. It is better to wear out than rust out, to disintegrate into His love than to decay.

Know that those who are worldly, svelte, who look so at ease, and work feverishly at this, waste precious time here (tragically) on earth.

We are called to cooperation, not competition.

It’s real freedom, because you can stop fretting over someone who has a larger home than you do, over comparing your SUV to others, about having jewels or the latest fashion or suits or television. He who dies with the most toys dies with nothing.

This is freedom: to stop berating yourself over what you did or did not accomplish in a material sense. Make a list! That mansion? Who cares. That neighborhood? Good for them. The “exclusive” beach house? It pales next to what is seen even in the very lowest levels of Heaven (and perhaps even in comparison to what is at the threshold in uppermost purgatory!).

Choose simplicity over complexity, humility over worldly position, spirituality over Church politics (or politics of any kind, for that matter).

The Pope harps on the same theme: In the first Mass in Santa Marta after the Easter break, he denounced the “compromises” with the “worldly things” in which the followers of Jesus themselves fall (and go bad), starting with “money,” “whose lord is the devil.” Powerful words!

“We must obey God instead of men,” the Pope affirmed in his homily — reported by Vatican News –– repeating Peter’s words he quoted in the first reading from the Book of Acts. It is useless, in fact, he said, to seek a middle way “between the world and us.” Compromise with the world is enslavement to it. Get free!

“Am I free, or am I a slave to my passions, ambitions, riches, or passing fancies? (It sounds like a joke, but how many people are fashion victims!),” the Holy Father added today. “Let us reflect on our freedom in the midst of a ‘schizophrenic’ world. It shouts ‘Freedom, Freedom, Freedom!’ yet is really a slave.”

The truth sets us free and the truth is that worldly standing vanishes at the moment of death; we are left not with any earthly house, but what Saint Teresa of Avila called our “interior mansions.” And it is there that the peaceful free soul at joy with God resides. 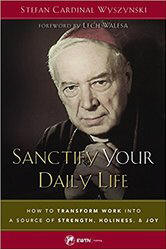