It’s fairly common — as far as angel encounters — to hear about “mysterious strangers” who appear in the way of beggars or homeless. This draws us to the Scripture that says, “Do not neglect to show hospitality to strangers, for by this some have entertained angels without knowing it” (Hebrews 13:2). When we die, we’ll look back with astonishment at how many times God sent angels to us.

Years ago we knew a New York man who had been out of work for a distressingly long while. On one of his trips to Manhattan looking for a job in the financial sector, he ran across a homeless man and despite his usual disinclination to give street beggars money (believing they would simply use it for alcohol or drugs), he had a sudden compulsion to hand the man money — not just a few coins or a dollar bill, but a twenty, though his own funds were running woefully short. In fact, the twenty was all he had in his wallet.

He ended up landing a job soon after, in another part of town, and on his first day of work he spotted the very same man outside the office building of his new employer — several miles from where he had first seen this “beggar” to whom he had shown generosity! (The odds? During a typical twenty-four-hour period, counting residents, commuters, and visitors, between 2.5 and 3.9 million people set foot on the sidewalks of Manhattan.) 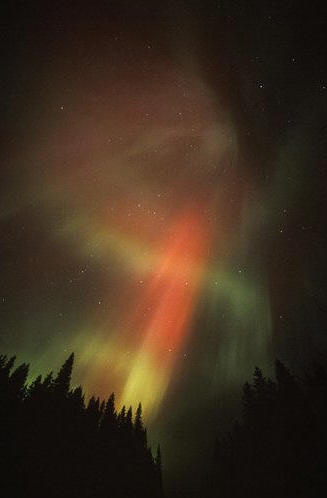 We also recall a New York fireman we knew who had a drinking problem and was overdoing it at an annual firemen’s picnic upstate. Intoxicated, he’d wandered up a training platform and before he knew it was stumbling off — ready to plummet several stories below (and perhaps to his end).

At the last moment, as he tumbled off, he said, a hand grabbed his and yanked him back up onto the platform with one amazing motion. To his astonishment, he was looking at a stranger who was a mirror image of himself — but dressed far more neatly and very clean-shaven, far different than the disheveled fireman. It was as if this mysterious angel was showing him how he could and should be. The man simply disappeared immediately after (and the fireman cleaned up his act; we always ran into him at daily Mass).

There are too many of these accounts to scoff at them all.

Years ago we recounted how Nancy McKinnon from Toronto remembers an incredible beggar who came to her family’s door for food and then vanished. When they looked out, they saw seven footprints that then just stopped in the snow — leading to nowhere!

Another, Rose Walters of Bartlett, Illinois, writes about a terrible accident in which she was hit by a drunken driver, surviving in a way that seemed miraculous. “When I got out of my car a man dressed in a clean crisp white shirt appeared from nowhere,” she testifies. “He embraced me and told me that I must keep thanking God. After the police left and I was just about to leave, he hugged me and put a piece of paper in my hand, and said, ‘Here is my phone number. Call me and I will pray with you.’ When a few days went by and I looked at the paper, his name was ‘Isiaha.’ I called the number but there was no one there by that name.”

And then there’s Julie Ash of Great Falls, Montana. “In 1995 I was walking in downtown Cleveland, searching desperately for work in a strange city, broke and miserable,” she wrote us. “Suddenly an ordinary-looking woman in a conservative skirt and blouse came out of a coffee shop and asked me if I had any money.

I told her I wished I did, but I that I was unemployed. She said her name was Jean, that she was on her way to the cathedral, and that she would pray for me to get a job. I thanked her and started to walk away, but she spoke again. ‘I would shake hands with you, but my hands are dirty,’ she said.  Then, she lifted her hand up, palm towards me, as if in blessing — but her hand wasn’t dirty at all. In fact, it was as white as snow. I will never forget it.

I felt I had been blessed by an angel, maybe even my own guardian angel. It wasn’t long afterwards that I did find work. But the job wasn’t as important as the sense that in my darkest hour, God’s angels were there by my side, watching over me and helping me when I needed it the most.” Amen!

The following case involves a beggar and a woman named Bonnie — this time, with humans playing the angelic role. It is related by writer Joan Wester Anderson, who starts it with Bonnie’s recollection:

“‘Every morning when I got off the commuter train, I’d pass this homeless man on my way to work,’ Bonnie relates. ‘I’ve never gotten involved with people like this because I have mixed feelings—would my donation buy drugs for them, or enable them to stay helpless?’

“Perhaps. Yet, Bonnie seemed drawn to this particular vagrant. She found herself asking a different question: What would Jesus have her do?

“Gradually Bonnie made eye contact with this man. Brief conversations followed. His name was Phil, he told her, and he had been on the streets about a year. Beyond that, he would not elaborate. Sometimes Bonnie’s only connection with Phil was a smile, and a cheery greeting. At other times, she’d bring him a sandwich, or give him some coins. ‘The people at my office teased me unmercifully,’ she says. ‘They felt I was a “soft touch,” and hopelessly gullible.’

“But she kept on; somehow it just seemed right.

“One day, however, Phil was not at his usual post. Weeks passed, and he didn’t return. Bonnie was concerned, but the merchants and police officers along her route didn’t know what had happened to him.

“Gradually, she forgot too… until one morning when, as she passed the corner, someone called her name. She turned around. Coming toward her was Phil! But not the same disheveled beggar she had befriended over a year ago. No, this Phil was clean-shaven, clear-eyed, wearing a suit and a smile. ‘Phil!’ she gasped, ‘what happened to you?’

“‘You did, Bonnie.’ He was standing in front of her now, and she could hardly believe the change in him.

“’Oh, but you did. You, and two men who work together on the next block. For that whole year I lived on the streets, you three were the only ones who saw me a person. You looked at me, and talked to me. One day I asked myself: if there are three people in the world who believe in me, why can’t I believe in me? So I went into rehab, and here I am.’

“He had a job, he explained, and wouldn’t be downtown any more. So he had come to his old corner one last time, to see if he could locate the three who had changed his life. ‘I found the men yesterday,’ Phil explained. ‘I was just waiting for you.’

“‘Whatever you do to the least of My children, you do to Me.’ Bonnie could hardly see Phil through the tears in her eyes. But she knew now the Source of that unusual urge to ‘get involved, if only in a small way.’ How glad she was that she had obeyed.”