The recent “Pachamama” controversy (over a pagan idol brought into the Vatican during the Amazonian Synod) brought to mind a number of times Pope Saint John Paul II also found himself on controversial, unfamiliar terrain.

His ecumenical prayer services in Assisi — during which he allowed other denominations, and even other religions (Hindus, Buddhists) to pray aloud — brought loud opprobrium; suddenly the Pontiff found himself exorciated as a heretic and perhaps even an anti-christ (as was John XXIII, with whom John Paul II was canonized).

Some Catholics — to say the least — didn’t like the Church being so up-close-and-personal. In fact, there were those, from ultra-traditionalist corners, who went ballistic.

“Anti-christ John Paul II with idolaters, pagans, and infidels” one website still blares as a headline, saying, “Oct. 27, 1986, Antipope John Paul II prayed with over 100 different religious leaders of various false religions, thereby repudiating the teaching of Scripture and the 2000-year teaching of the Catholic Church outlawing prayer with false religions. The entire day of prayer with the pagans, infidels, and heretics was Antipope John Paul II’s idea and they came at his invitation. During this meeting, the Dalai Lama placed a Buddhist statue on the tabernacle in the Church of St. Francis.  Among the various false religious leaders at Assisi, there were rabbis, Islamic muftis, Buddhist monks, Shintoists, assorted Protestant ministers, Animists, Jainists and others. During the meeting, a member of each false religion came forward and offered a prayer for peace.  In 1928, Pope Pius XI authoritatively condemned this activity and denounced it as apostasy from the true Faith.”

That, to employ understatement, is a bit harsh. The headline on another website: “The Heresies of John Paul II.” 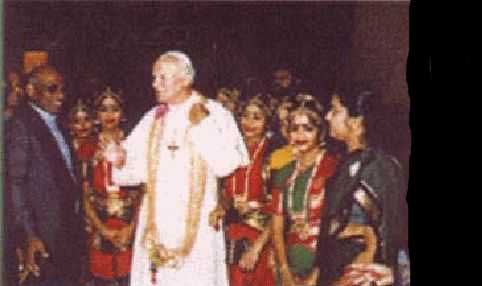 We call him John Paul the Great.

But we also respect concerns about rubbing up against occultism: it can leave a residue; it can burrow in with an effect. It can certainly leave a wrong impression. Such was also the case when John Paul II visited the nation of Benin and took part in an animistic ritual. Said USA Today (of that): “Chanting young girls treated Pope John Paul II to a ‘trance-inducing’ voodoo dance at an unusual encounter between the leader of the world’s Roman Catholics and Benin’s top voodoo doctors. The Pope told voodoo followers in the west African country, birthplace of the traditional religion, that they would not be betraying their ancestors if they became Roman Catholics.”

Says the aforementioned, and rather ardently anti-John Paul II, website: “Here we see Antipope John Paul II meeting with Voodoo worshippers, whom he invited to come pray with him at Assisi in 1986. The Animist religion to which they belong worships the souls of ancestors, the forces of nature, and also the Devil. Antipope John Paul II assured 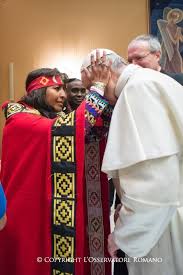 the witch doctors, just as he assured all the pagans, infidels and idolaters at Assisi, how ‘great’ their religion is.” What Saint Pope John Paul II was doing was trying to find common ground.

Of course, in recent years, in addition to Pachamama, Pope Francis allowed a shaman [right] to bless him at the Vatican.

When Benedict XVI went to Benin, he blasted “occultism and evil spirits.”

Pagan blessings are not our cup of tea. One healing priest believes the blessing of John Paul II by those voodooists in Africa may have led to illness he suffered soon after. Better to stay a bit clear, at any rate, in our view.

But who are we?

A tough place to sit, the Throne of Peter!