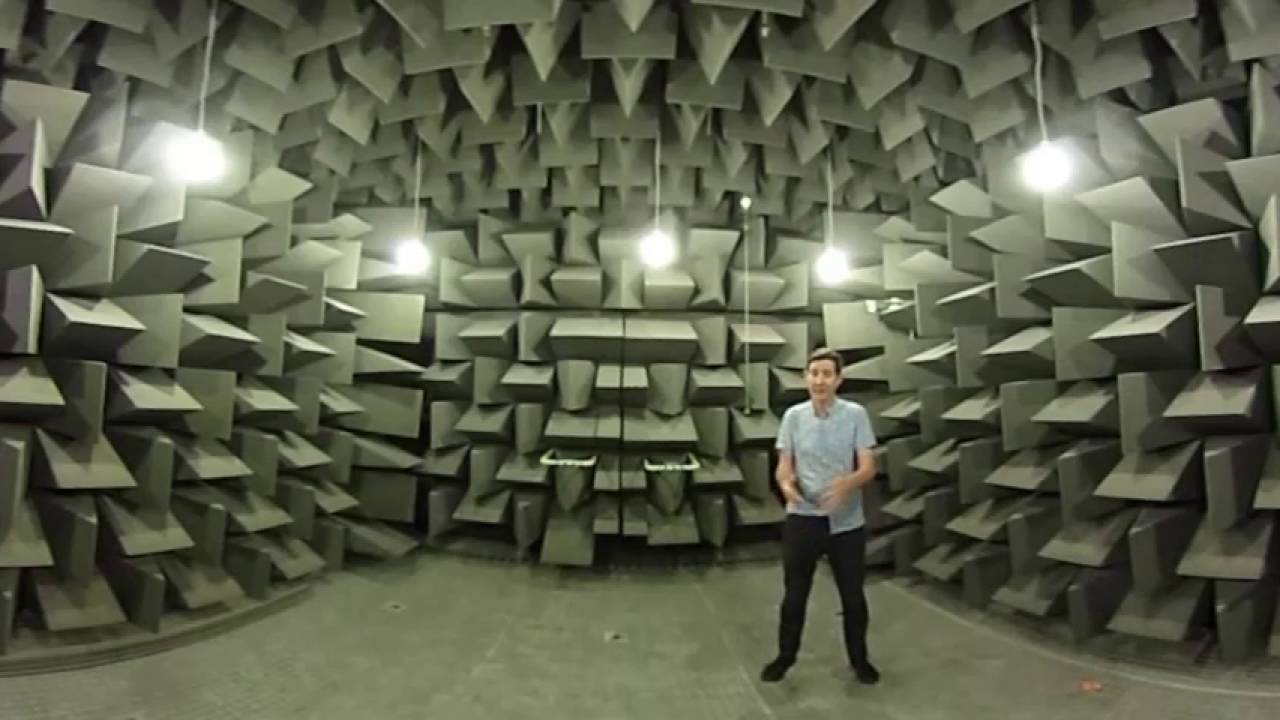 Did you know that Microsoft has built a chamber at its hardware lab that’s just about perfectly silent — billed as the quietest room on the planet?

It’s for testing the sounds made by its tablets, with no interference whatsoever from even the slightest external noise, lined thickly with sound-absorbent tiles and separated from the rest of the building by an air chamber and its foundation is set on springs.

A whisper is deafening, compared to what goes on in here. There is no echoing. It’s just about as quiet as particles moving in gas. Those visiting say their own words sound strange leaving their lips.

Where a normal conversation is sixty decibels, the “noise” in this “anechoic” chamber is minus-twenty decibels.

A great prayer room this would be, for silence is so important.

As Cardinal Robert Sarah of Guinea, Africa, points out in a new book (The Power of Silence: Against The Dictatorship Of Noise), the Christian can not fully or even adequately function without silence — and this should include in church.

It was with silence that the Virgin Mary responded to evil at Calvary. This was serene acceptance in her own “anechoic” chamber.

“The union of her silence with the prayers of Heaven enables her to remain standing at the foot of the Cross,” writes the cardinal. “Mary does not rebel, she does not shout.

She accepts suffering thanks to her prayer. Did not Jesus Himself prepare to endure His Passion by a night of prayer in the Garden of Gethsemane and by many other nights, alone on a mountain or away in a deserted place?”

Noise, as C. S. Lewis once said, “is the music of hell,” notes a reviewer of this work.

Thanks to the aid of silent prayer, “man becomes capable of describing realities in all their raw truth,” says Cardinal Sarah, whose views have been publicly lauded by Benedict XVI.

“A man of God will legitimately speak in God’s Name only after encountering Him in the silence of the interior desert and conversing with Him face to Face, ‘as a man speaks to his friend’ (Exodus 33:11).”

Far from noise. Far from distraction.

(Contrast that with all the noise — the radio, the internet, TV — that surrounds us.)

One can quibble with certain passages. Cardinal Sarah goes at length about how silence is what will greet us in Heaven, when one can point out the opposite, that God and Jesus and angels speak there, that choirs of angels play music, that the Voice of God was audible at Tabor.

But his insights are often profound.

“Our world no longer hears God because it is constantly speaking, at a devastating speed and volume, in order to say nothing,” he notes incisively, taking a verbal knife to modernism.

“Modern civilization does not know how to be quiet,” writes Sarah. “It holds forth in an unending monologue postmodern. Postmodern society rejects the past and looks at the present as a cheap consumer object.”

We need to leave our interior turmoil in order to find God.

We need to build our own little chambers.

“Despite the agitations, the busyness, the easy pleasures, God remains silently present,” writes the cardinal. “He is in us like a thought, a word, and a presence whose secret sources are buried in God Himself, inaccessible to human perception.”

Divine graces pour forth, says this prominent (and rising) churchman, when we meditate in silence on Scripture.

It is through silent faith that we can find and contemplate God  — “after resisting all the attacks of the Prince of this world,” which come in the turbulence of airwaves because he is also “prince of the power of the air” — but in this case, not molecules in gas but shouting and arguing and torrents of political wind.

Let us end here with what Cardinal begins: with a quote from Romano Guardini, author of The Lord:

“The greatest things are accomplished in silence — not in the clamor and display of superficial eventfulness, but in the deep clarity of inner vision; in the almost imperceptible start of a decision, in quiet overcoming and hidden sacrifice.

Spiritual conception happens when the heart is quickened by love, and the free will stirs to action. The silent forces are the strong forces. Let us turn now to the stillest event of all, stillest because it came from the remoteness beyond the noise of any possible intrusion — from God.”

[resources: The Power of Silence: Against The Dictatorship Of Noise] and Michael Brown retreat: deep spirituality and the afterlife, New Jersey, June 24]