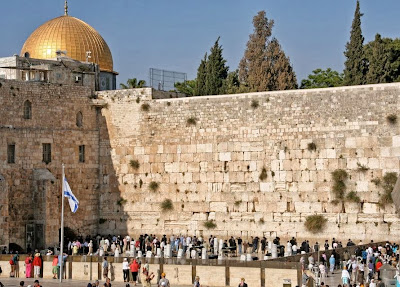 What if — only if — the two most powerful leaders in the world suddenly decided to join forces in something anticipated now, prophetically, for centuries: rebuild the Temple in Jerusalem?

A stir this would cause! (See today’s Gospel reading.)

We speak here of Vladimir Putin of Russia and President-elect Donald J. Trump — who at least initially seem to like and feel an affinity, even a distant affection for, each other. As strong personalities, they perhaps see much in common.

It’s claimed that Putin is a believing Christian of the Russian Orthodox kind, wearing medals as he does and kissing icons of Mary (at public events). In 2012, during a visit to Jerusalem and the Wailing Wall, where he prayed, it’s said he remarked to someone alongside him that he’d like to do just this: resurrect that legendary place first built by King Solomon. (It was renovated or rebuilt several times and associated, of course, even with Jesus.)

A group of rabbis known as the Nascent Sanhedrin and seeking to restore biblical rule to the Holy Land has sent a letter to both leaders, urging them to “join forces and fulfill their biblically mandated roles by rebuilding the Jewish Temple in Jerusalem.”

Might Trump — known for his audacity, as well as his appreciation for at least certain Evangelicals, who are keen about the Temple — agree to do this?

Perhaps only two such powerful nations could complete the task, for it would raise fantastic opposition from Muslims — who constructed their third holiest place, Al-Aqsa Mosque, the current site of the Dome of the Rock — where the Temple once stood.

Jesus Himself prophesied about the Temple (predicting its the destruction that occurred, at the hands of Romans, in 70 AD). End Times stuff?

Or just to be categorized as the fake news so prevalent (and “viral”) on the internet?

Through the centuries, the Temple was destroyed and renovated or rebuilt until 363 A.D., when a quake may have struck the area, putting an end to such efforts.

Three centuries later, in 691 AD, Muslims who had overtaken Jerusalem built the majestic mosque there. The Temple Mount bears significance in Islam as it acted as a sanctuary for many Hebrew prophets. It’s considered the site of Muhammad‘s Night Journey and ascent into Heaven  (one of the most significant events recounted in the Qur’an). Thus the duel for conflict.

The Third Temple, some believe, will exist during the Great Tribulation. As an Evangelical named Dr. David R. Reagan points out, “Daniel refers to this Temple when he says that ‘the prince who is to come’ (the Antichrist) will enter it and stop the sacrifices in the middle of the Tribulation (Daniel 9:27). The Apostle Paul mentions it when he declares that the ‘man of lawlessness’ will profane the temple by entering it and declaring himself to be God (2 Thessalonians 2:3-4). The Third Temple is also mentioned in the book of Revelation when John is told to measure it — a symbolic way of telling him to assess its spiritual condition (Revelation 11:1-2).”

This raises the question as to precisely when the Temple will be rebuilt. The Bible does not reveal the answer to this question. All it says for certain is that the Temple will be in existence when the Antichrist (supposedly; or an antichrist, if we accept this interpretation) reveals himself.

Here’s where we get to the most relevant part of it. And sobering it is.

The Talmud provides traditional theological reasons for the destruction: due to three cardinal sins that were rampant in society: idol worship, licentiousness, and murder. “And why then was the second Temple – wherein the society was involved in Torah, commandments and acts of kindness – destroyed?” asks Reagan. “Because gratuitous hatred was rampant in society. This teaches you that gratuitous hatred is equal in severity to the three cardinal sins: idol worship, licentiousness, and murder.”

[resources:  Announcing a retreat in Florida]