ART and UFOs?
No thanks, only art… 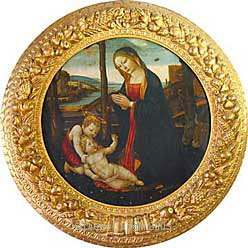 “Meanwhile the average man had become progressively less able to recognize the subjects or understand the meaning of the works of art of the past. Fewer people had read the classics of Greek and Roman literature, and relatively few people read the Bible with the same diligence that their parents had done. It comes as a shock to an elderly man to find how many biblical references have become completely incomprehensible to the present generation.”

Obviously once a Flying Object is identified, it cannot be considered a UFO anymore. These pages deal with a series of Flying Objects which, as some people say, appear into ancient works of art. As a matter of fact many books, and above all many web sites dealing with paleo-astronautic or clipeology, present various works of art as an evidence of UFO sightings in the past. Unfortunately, once seriously considered, these same works of art prove to be much more related to art itself than to any UFO concern. 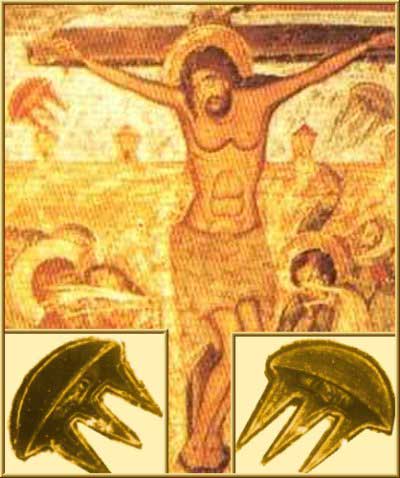 The images at issue in these sites are generally the same ones. Once a new image appears into one site, it spreads out immediately into the others as well, usually together with the same identical comments.

The first impression is that at the basis of these web sites lies a very simplistic methodology, being any historical or artistic knowledge carefully avoided. The standard practice seems to be: first taking a book concerning art, better if dealing with art works of the 17th or previous centuries; then looking for any strange detail, above all saucer-like objects of any kind. That’s it. This way, obviously, it is easy both to detect strange elements and to declare them “alien” or “unidentified” in respect to the environment or the period in which they appear.

The point is that no one of the authors of these web sites takes into account the symbolic meaning of these strange elements in respect to the art of the period. Worst of all, by considering these elements as the representation of something real or really seen by the artist, they assume that the artist, eg. an Italian artist of the 15th century or an anonymous Byzantine painter, would actually be allowed to insert any non-canonical or un-codified element into a religious representation. On the contrary, in past times the commissioners (those who choose the subject and supervised the execution of the art work – in these cases the religious institutions) would have never allowed the author to insert into a work of art anything other than what previously decided, especially in case of religious subjects. In this latter case, in addition, restrictions were even stronger.

At this point one may wonder whether these authors writing about art and UFOs have ever entered a museum or a church. If so, they would be astonished about the infinite amount of “strange” objects included into paintings, statues and art works of any kind…

Next chapters focus on the real subject and meaning of a variety of art works which appear into Italian and other ufology web sites, and are intended as a strong response to those web pages which publish ancient art reproductions without any knowledge of their real subject, meaning and historical value.