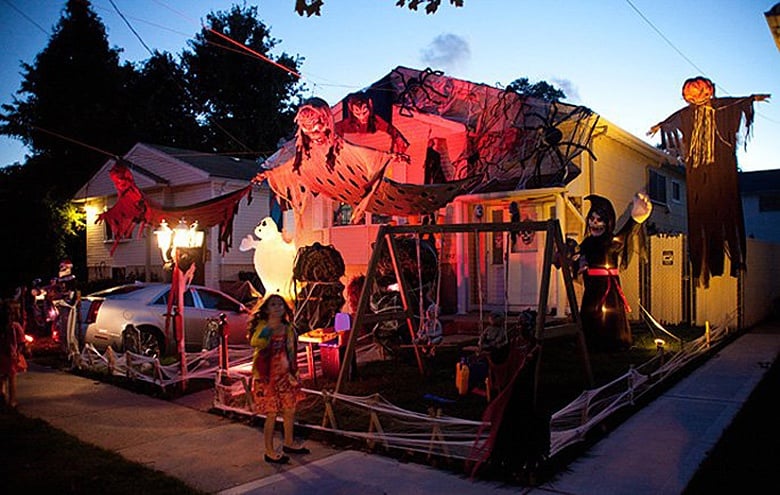 If you think Halloween is bigger each year — as if trying to challenge Christmas — you’re not alone. 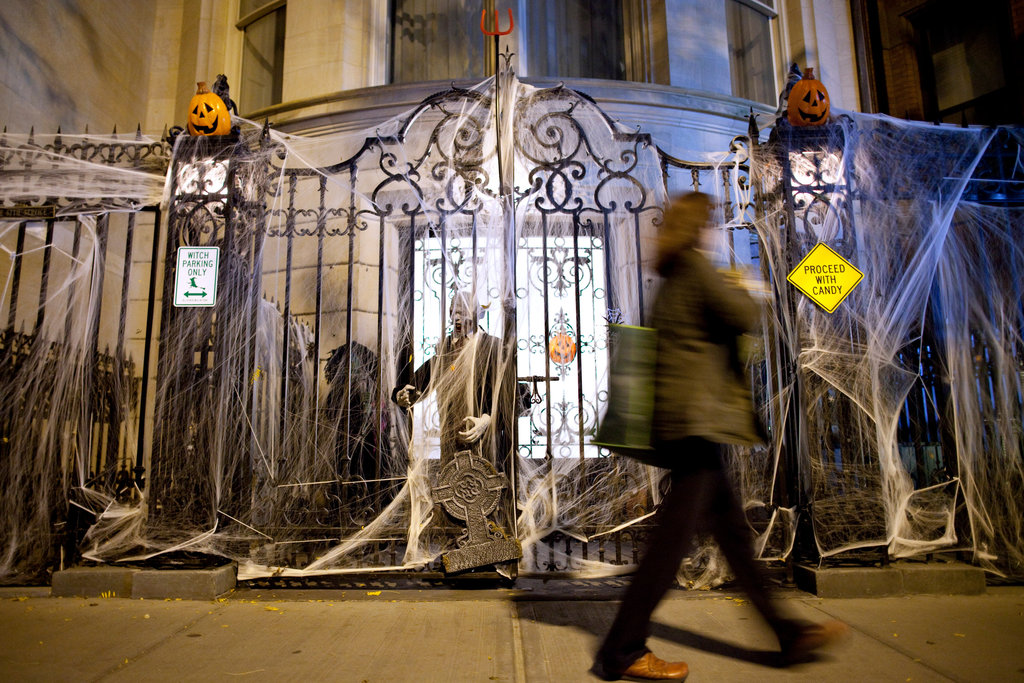 It’s an observation that arrives as one beholds homes decorated as never  before with skeletons, goblin robes, spider webs; restaurants with witch regalia; storefronts with werewolves.

Never before has Manhattan, for one place, decked itself in boughs of horror as this season (we observed last weekend) — in some cases, quite grimy and hideous visages. This year there are massive Halloween parades beyond the debauched one in Greenwich Village — as faraway as Ireland.

On the more docile side, pumpkins are on every street, or so it seems; once more, as never — and we’ll accept that as a sign of the harvest, if that’s the intent (and it’s not carved to portray a smirk of the demonic). Just fun? Sometimes. Evil? Often.

Witchcraft is serious business — and witches take Halloween just that way. No innocuous pursuit, is the occult.

As a diocesan newspaper in New England (the Pilot) reports, from Salem, the capital of sorcery: 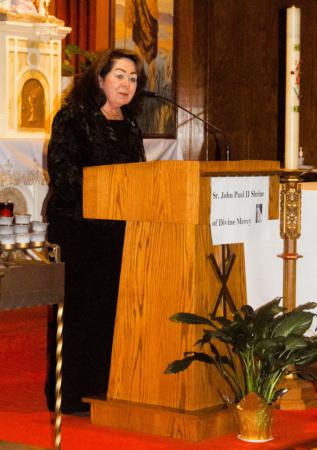 Locals are all too aware that their city is considered the witchcraft capital of the world, and that October is its busiest and most lucrative season for tourism. What better time and place to hold a symposium on witchcraft, exorcisms, and the demonic?

On Oct. 6, while groups of tourists passed by on walking tours and drivers searched for coveted parking spaces, the St. John Paul II Shrine of Divine Mercy held a symposium on “Exorcism in the Present World and St. John Paul II’s Teachings About Satan.”

The first speaker was Paula Keene, a Salem resident and retired art teacher. She shared her testimony of how she fell away from the Catholic faith she was raised in, became a Fourth Degree witch, but eventually returned to the Church.

“I can speak directly about the effects of becoming involved with the unseen realms of the spiritual world. I consider the sharing of this knowledge and my firsthand experiences with witchcraft to be a personal responsibility,” Keene said.

Keene grew up on Gallows Hill, the site where 20 innocent people were executed during the Salem Witch Trials of 1692. When she was growing up, not many people in Salem identified themselves as witches, but Keene harbored “an intense curiosity and fascination with witchcraft on many levels.”

As an adolescent, Keene rebelled against her family’s Catholicism and dabbled in the occult, attending psychic parties and telling friends’ fortunes. Her family did not discourage her, Keene said, because, “We just didn’t know how dangerous it was.”

Keene began to formally study witchcraft when her mother developed cancer in the early 1980s and sought spiritual healing from Laurie Cabot, a matriarch of the witchcraft community. Keene accompanied her mother to Cabot’s classes and became increasingly involved with witchcraft. Using Salem as her home base, Cabot promoted witchcraft as a religion and portrayed it as an “attractive, empowering lifestyle.”

“As a lapsed Catholic, before I quite knew what was actually happening to me, I fell hard and deep under the spell of Laurie Cabot and her community of Salem witches,” Keene said.

Over time, however, she felt as though magic was draining her energy rather than increasing it. She heard voices, had out-of-body experiences and woke up speaking foreign languages. Keene also began to question Cabot’s insistence that they only practiced white magic, which was supposed to be harmless, even though they conjured from the “infernal abyss” and used tarot cards designed by a practitioner of black magic. 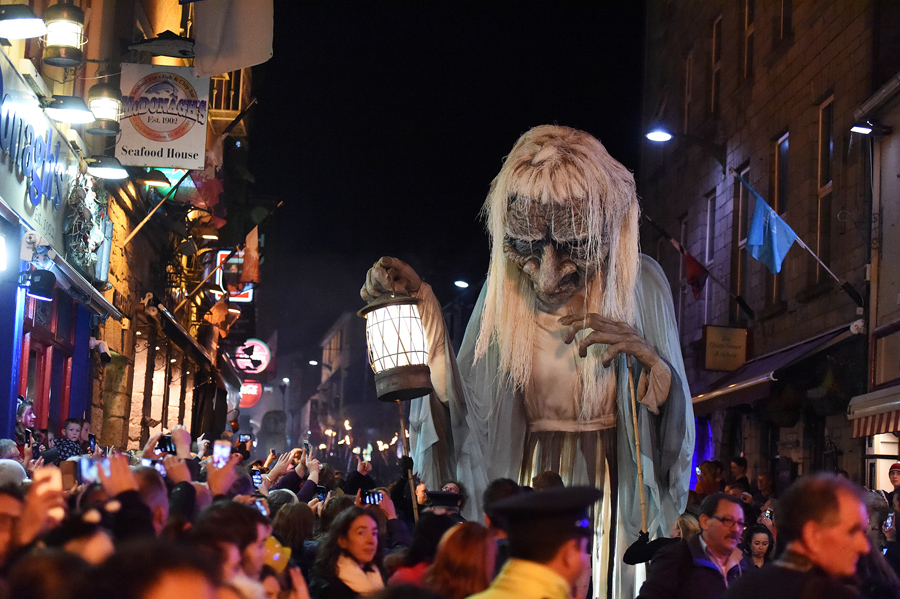 When her mother died in 1985, Keene quit the coven, but cutting off her ties to the community did not bring her peace.

In 1988, at a time when she was struggling with depression and low self-esteem, Keene came across her family’s antique Bible. When she touched it, she experienced a vision of Jesus casting seven demons out of Mary Magdalene.

“Because Jesus Christ healed her, I somehow believed that he might be able to heal me too,” Keene said.

After being away from the Church for 20 years, Keene went to Mass at Immaculate Conception on Hawthorne Boulevard. When she entered, Keene said, she felt “an enveloping sense of peace seemed to immediately surround me.”

She found one part of the Mass was different than she remembered: at Communion, laypeople drank from the chalice. When she received the Blood of Christ, Keene said, “it felt like pure, liquid sunlight was pouring itself into my dark soul.” She gradually became a daily communicant and is now a secular Carmelite. 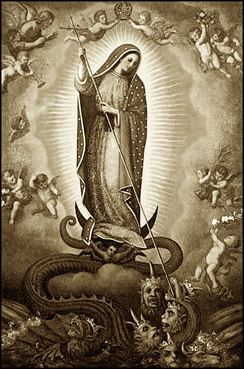 “I am standing here today as a living witness to testify to the redemptive and the restorative power of the Holy Eucharist,” Keene said. In closing, she encouraged attendees to pray for those caught in the study and practice of witchcraft.

The second presenter was Father Dennis McManus, a priest and exorcist from the Archdiocese of Mobile, Alabama. He has been a professor of theology at St. John’s Seminary for six years and is also an associate professor of Jewish Studies at Georgetown University.

Father McManus began his lecture on the topic of Halloween.

In its origins, Halloween involved honoring the dead and using light as a defense against the demonic. In the late 1800s, the Irish and English brought the holiday to America.

Halloween used to be for children, Father McManus said, but has shifted to become more about adults, who use it as an opportunity to “play with darkness,” to experiment with behaviors they would not ordinarily practice before they “run back to the light.”

“When you ring the front doorbell of the dark kingdom, someone always answers,” he said.

Father McManus used the analogy of a website that captures a computer’s identity when an Internet user visits. The site revisits the user to see their level of interest and invite them back.

“When the Christian context of Halloween is taken away, you have the emergence of darkness given permission in our culture to explore,” Father McManus said. 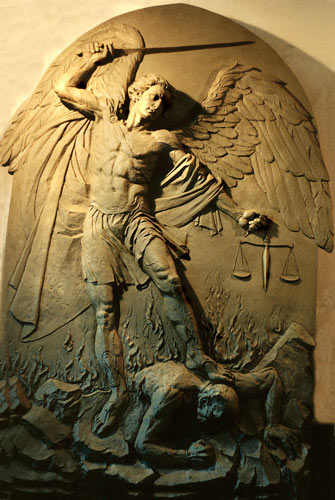 He acknowledged that residents of Salem witness this in greater intensity.

Father McManus shared stories of people who consulted him after encounters with ghosts, which distinguished from demons. Ghosts are souls in purgatory that require prayers or help in making restitution for their sins. They can be annoying, Father McManus said, because they seek attention, but they do not intend harm. In contrast, demons, which are fallen angels, are always destructive. They possess people through relationships that require consent.

Father McManus identified five ways demons possess people: by making a contract for gain; through serious sins that become habitual; through witchcraft or satanic things; through inheritance, such as being raised in a cult; and through personal wounds, which still require healing apart from exorcism.

In the panel discussion following the dinner break, Father McManus said there are four sure signs of possession: extraordinary strength, knowledge of languages never studied, secret knowledge that should be impossible for the individual to know, and being repelled by holy things.

After the panelists answered questions from the audience, the attendees prayed the Divine Mercy chaplet and venerated a relic of Sister Maria Faustina.