“There’s a great deal of celebration that occurs when people are leaving the hospital, and for good reason, but the journey to recovery still has a long way to go,” Reg Blaber, chief clinical officer for Virtua Health, recently told a newspaper. “This virus is just so evil. It wreaks so much havoc.”

And so it is: evil. Life-destroying. The very word is “live” spelled backward, just as this virus seems capable of halting life at every level, of reversing the course of society.

It is the real thing — a warning morphing into an incipient chastisement.

It is not a full-blown chastisement, at least up to this point.

Is it truly evil, or did God send it? Or both? Does He allow evil a longer leash when men have strayed? Or is it that we simply have meandered into the devil’s backyard?

Some argue that God doesn’t send punishment. It is unclear what Bible they read. One can start with Noah or the plagues of Egypt. Major approved apparition sites such as Fatima, LaSalette, Pontmain, Kibeho, Miraculous Medal, Akita, Champion (Wisconsin), Cuapa (Nicaragua), San Nicolas (Argentina), Amsterdam (Holland), Mosul (Iraq), Damascus (Syria) and others bore messages linked to unfortunate events. For decades, even over the course of centuries, during the Middle Ages, Mary appeared or in some way manifested in town after town when bubonic plague threatened, promising to protect the community from disease if the people would turn to her, to Jesus, to God. (We see how a germ can come in waves for a very long time, surging and resurging almost endlessly, without intervention, for many years.) She often has mentioned “holding back His arm.” 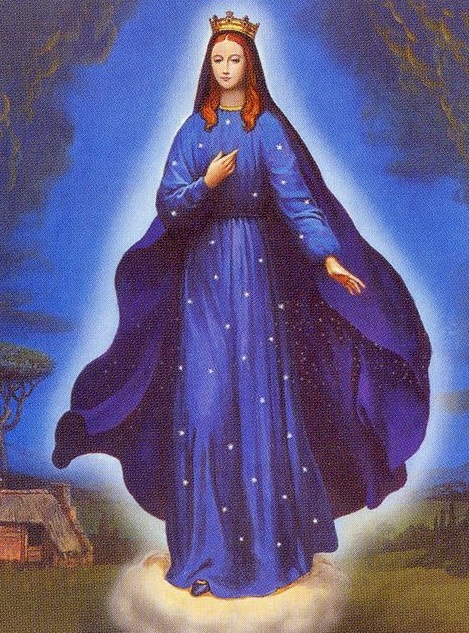 At Medjugorje, not only has the Virgin Mother given secrets that involve “Divine chastisements,” but has explicitly said such things as: “You cannot imagine what is going to happen nor what the Eternal Father will send to earth” (June 24, 1983). And: “Repeated prayers and fasting reduce punishments from God, but it is not possible to avoid entirely the chastisement” (November 6, 1982, to cite just two quotes from there relevant to God’s involvement).

Might God want the societies of men to reverse course? And might things like pandemic be the only way? The city of Salem dreads the possibility of an October without Halloween this year (praise God)!

Yet, again, chastisements can be netherworld-like, even alluded to as “evils” at places like Medjugorje and LaSalette — “like a demon on a rampage,” to quote an evangelistic prophet from Africa on the current contagion.

There is more than coronavirus on the horizon. This shouldn’t cause the faithful fear; it should excite us to deeper prayer. Fear solves nothing. And the Blessed Mother can protect us from anything (witness the Jesuits who survived just a mile away from ground zero in Hiroshima, or the shrine that survived the greatest wildfire in U.S. history (at Champion, Wisconsin).

Let us begin to realize that sin goes far beyond abortion, that while that is at the top of the list, there are also genetic manipulation, materialism, wanton sexuality, selfishness, blasphemy, hateful talk, gender manipulation, drug use, lying, anger, disobedience, using God’s Name in vain, destruction of nature, lewd fashion (which the Virgin of Fatima said sends a great many to hell), and pornography, to name some serious transgressions.

But this covid thing: Its very strangeness speaks of the diabolical. It is elusive. One cannot escape it. Yet it rarely causes effects the average person has seen. When it does, the effects are very odd. It is not the flu. We have never seen anything quite like it. “I think that most people kind of understand that this is a brand new illness, a brand new phenomenon, that we’re dealing with, and we’re just doing the best that we can,” said Jason Pan, a Penn Medicine physiatrist, a doctor who specializes in rehabilitation.

“Long before COVID-19, doctors knew that patients who needed intensive care were at high risk for long-term physical, cognitive and mental health problems, a condition that was named post-intensive care syndrome (PICS) in 2012,” said a report. “Survivors of acute respiratory distress syndrome (ARDS), a severe form of lung infection that is often the reason people with diseases like COVID-19 need a ventilator, were especially likely to struggle.

“Dale Needham, a critical care physician at Johns Hopkins University, has been studying how patients fare after ICU stays and ARDS for more than 17 years. Up to 70% of ARDS patients, he said, still have severe fatigue six months to a year after hospital discharge. A year after an ICU stay, a third of people who were working before they got sick are jobless. Joint problems and muscle weakness can last for months or years. A third of survivors of respiratory failure or shock have cognitive impairment a year later. Anxiety, depression and post-traumatic stress disorder are common years later in people who’ve had an ICU stay regardless of how sick they were.

“The coronavirus, Needham said, has led to a huge increase in ARDS, so some health professionals are seeing such patients for the first time. They may not know, for example, that hair loss is a common reaction to the physical stress of severe illness, or that steep changes in heart rate and oxygen levels with minimal activity occurred in ARDS patients before the coronavirus.

Hair loss? Memory diminution? Here is an article about long-term effects that should be read by those who want to honestly evaluate this illness (as opposed to relying solely on Youtube or Facebook, where flashes in the pan, many implausible, seem to rule the day).