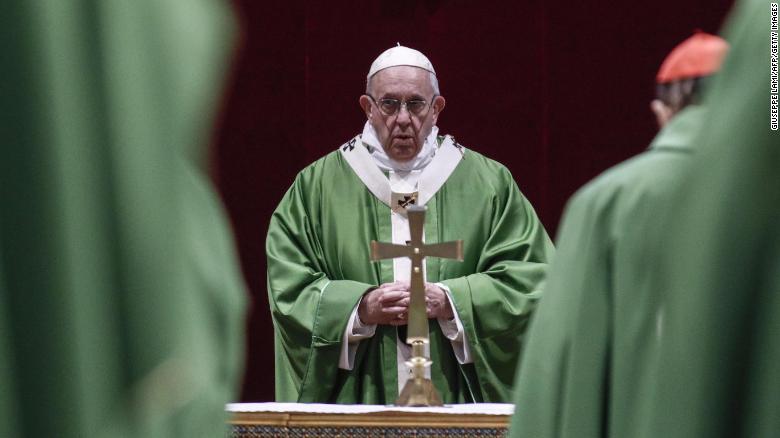 The Pope, speaking on Sunday of abuse, used surprising language at the conclusion of the Vatican summit that focused on the crisis.

In so doing, he also hit it right on the head — and got to the heart of it.

Sexual abuse by clergy, said the Holy Father, was and is “brazen, aggressive, and destructive evil.” In no uncertain terms, he referred to priests involved with it as “ravenous wolves” — which they are.

“Consecrated persons,” said Pope Francis, “chosen by God to guide souls to salvation, let themselves be dominated by their human frailty or sickness and thus become tools of Satan.”

It’s hard to be tougher or more forthright and accurate than that: the devil — who has been ignored for too long by a Church that has restricted exorcisms, removed the St. Michael prayer, even modified Scripture (when it comes to the very Gospel today, in which the word “fasting” has been dropped) and marginalized spiritual warfare as almost an eccentricity.

If that changes — and it might, to a degree (the Pope’s remarks carry much weight, no matter how controversial many find him) — then the Catholic ship, currently taking so much brine, will begin — if only begin — to close a Titanic aperture.

They are quotes, these from Francis over the weekend, that are not what typically come from the mouth of a liberal or modernist, which many (often understandably) consider the Holy Father to be.

Two days before, the Holy Father noted that those, on the other hand, right or left, who incessantly attack the Church over abuse and other failings are likewise “in league with the devil.”

Mention of the devil is a rarity among U.S., West European, Australia, and Canadian priests — and all but non-existent among seminary rectors.

But there was the head of the Church, unmasking the devil on the world stage. While the liberal media tried to say that the Pope was all words but little concrete action (in the way of proposals), when one speaks the truth — names the devil — it can break the hold of darkness. There is power in “naming.”

This astonishingly blunt acknowledgement of evil Church infiltration — predicted as long ago as 1846, by Our Lady of LaSalette, and then Pope Leo XIII in the mid 1880s — is a first step to bringing an overly-institutionalized hyper-theologized Church back to the simple admonishments and charisms of Jesus.

In so doing, however, the Vatican and Pope must also acknowledge a key manifestation of Satan: homosexuality.

For while there may be those who are born with this unfortunate proclivity (only “may” be born as such; deserving our prayers), much or most of such disorientation is the fruit of demonic effect-deception-temptation.

While The Catechism of the Catholic Church doesn’t quite say that, it calls homosexuality “an intrinsic disorder,” and until such a disorder is remedied, a person of such inclination is not fit for the seminary (but rather a candidate for deliverance, counseling, and healing). “Basing itself on Sacred Scripture, which presents homosexual acts as acts of grave depravity,” says the Catechism, “tradition has always declared that ‘homosexual acts are intrinsically disordered.’ They are contrary to the natural law. They close the sexual act to the gift of life. They do not proceed from a genuine affective and sexual complementarity. Under no circumstances can they be approved.” Those homosexuals already ordained but chaste should be lauded but also should strive for deliverance.

Suffice it to say that the “lifestyle” and sexual practices of homosexuals lead to a life expectancy of less than fifty years of age.

Still, charity rules here also. While active homosexuals are not fit to consecrate a Host, nor counsel pewsitters, the Catechism notes that:

“The number of men and women who have deep-seated homosexual tendencies is not negligible. This inclination, which is objectively disordered, constitutes for most of them a trial. They must be accepted with respect, compassion, and sensitivity. Every sign of unjust discrimination in their regard should be avoided. These persons are called to fulfill God’s will in their lives and, if they are Christians, to unite to the sacrifice of the Lord’s Cross the difficulties they may encounter from their condition.

“Homosexual persons are called to chastity. By the virtues of self-mastery that teach them inner freedom, at times by the support of disinterested friendship, by prayer and sacramental grace, they can and should gradually and resolutely approach Christian perfection.”

Brilliantly written, is the Catechism.

[resources: Catechism of the Catholic Church]

[Footnote: The end of this passage used to be “prayer and fasting”:

Then the boy’s father cried out, “I do believe, help my unbelief!”
Jesus, on seeing a crowd rapidly gathering,
rebuked the unclean spirit and said to it,
“Mute and deaf spirit, I command you:
come out of him and never enter him again!”
Shouting and throwing the boy into convulsions, it came out.
He became like a corpse, which caused many to say, “He is dead!”
But Jesus took him by the hand, raised him, and he stood up.
When he entered the house, his disciples asked him in private,
“Why could we not drive the spirit out?”
He said to them, “This kind can only come out through prayer.”]