One always learns a few things through retreats, one of which comes up, October 13 (anniversary of the great Fatima sun miracle), in Norwalk, Connecticut, along with one just completed in Cincinnati.

The issues discussed in Cincinnati, as will be the case in Connecticut, had to do with the pressing circumstances of our times — the turmoil in the Church, the increasing upheaval in society, the tumult in politics, and the turmoil in — nature. Matters long-predicted now materialize before our eyes. As an anonymous revelation of a short time ago put it, “Flee to Saint Joseph, and the Blessed Mother of the holm oak who tells us that brightness can be found only by those who practice the diligence of prayer amid consternation. Those who framed the future in accordance with [premature] time tables now find disbelief in prophecies though they unfold around you.”

It was very interesting to us because the “holm oak” apparently refers to Fatima (where Our Lady appeared above a holm oak tree) and indeed, many have been premature in their expectations.

But the gist of what long has been prophesied, by dozens upon dozens of locutionists/seers — whether to do with the Church or society or disasters — does indeed now unfold in the timing of God.

This was particularly true in Ohio, which may well have had the nation’s greatest eruption of alleged private revelations during the late 1980s and early 1990s when such claims reached a peak. Some claims did give me pause. But interesting they were.

In just the tri-state Cincinnati area was Sister Mary Mildred Neuzil, who was stationed, at various times, in a cloister there (she of “Our Lady of America”); five mothers who claimed to see “Our Lady of Light” just across the border in Indiana starting in 1991 (including one from Ohio who became the main receiver, known anonymously only as the “Batavia visionary”); an alleged seer named Rita Ring, who has since relocated to Clearwater, Florida; a seer from just over the border in Kentucky named “Sandy” (who was also connected with Our Lady of Light and whom as I recall I met back a quarter century ago just across from the Cincinnati skyline); and so forth. We may have a future report on the intriguing case of “Our Lady of Light.”

“I was visiting a friend’s farm in Indiana,” said the so-called Batavia seer. “My daughter, her friend, two other women, and I went out into the field where we had built a campfire and were sitting around talking.

“As night fell, we pulled our jackets around us and huddled closer to the campfire. Suddenly we noticed a light coming from an area of trees several hundred yards away. On looking closer, it had the shape of a lady turned sideways. One lady and I immediately fell to our knees and started praying our rosaries, which we had in our pockets. I asked who she was, and I got this reply [interiorly]: ‘I am the Lady of Light. Take my light and spread it into the darkness of ignorance overshadowing the earth.”

For our discernment. I remember the neon-and-spotlight-like luminosities that were seen first in Indiana, and then on the side of a church on Cold Spring, Kentucky, where an actively Marian priest, Father LeRoy Smith — later to move across the river to the Holy Spirit Center in Cincinnati — was pastor.

One reason for the upwelling may have been the many pilgrim groups from this state that journeyed to the apparition site of Medjugorje (which is now under study, by the Vatican, for substantial expansion).

Now deceased, Father Smith said his first trip there in 1988 was a turning point in his life. “My spiritual life deepened dramatically,” he once said. “I have always had a great devotion to Our Lady, but that increased a hundredfold.”

Elsewhere in the state was another low-key visionary who never revealed her identity, known only as “Mariamante” (her book of locutions, widely circulated, was called The Apostolate of Holy Motherhood, and bore an imprimatur from Bishop Albert H. Ottenweller, of Steubenville).

Others included: one, in Canton, who had received alleged visitations from the Blessed Mother while or after serving prison time (for bank robbery; I met him also); and the so-called “Holy Love” apparitions that have been the focus of a fair amount of controversy (I have not been there and am in no position to judge, though I do adhere to statements from the local bishop). 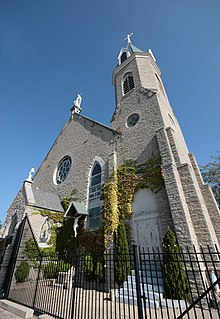 In Ellsworth was a seventeen-year-old boy who claimed to experience heavenly visions. Again, for discernment only.

And there is also the towering Church of the Immaculata at the top of a hill overlooking the Ohio River.

In Euclid is a national Lourdes Shrine.

What a Marian state this is! In Dayton is the world’s largest known library dedicated to the Virgin (I conducted research here for The Last Secret, tracing her manifestations back two thousand years) and in the Cleveland area a Catholic doctor around whom are allegedly miraculous cures.

Just north of Cincinnati is Lovelady, where the deeply Marian Riehle Foundation/Faith Publishing once existed as the foremost publisher during that tremendous upsurge of Marian interest (my first Catholic books, including Witness and The Final Hour, were published by them).

Many good Catholics, for sure, although it ranks just 29th among states as far as percentage of Catholics (18 percent). And so it remains — does the concentration of Marian circumstances there — a mystery, as do so many things in this field.

The winds of the Holy Spirit blow, as Scripture, says, where He will.

[resources: The Last Secret and retreat in Connecticut]