Oh, the feast day for the apparition of Our Blessed Mother at LaSalette is today. Mysticism, anyone?

Recently, in Chicago, we met a devout Catholic who has what appears like a unique charism with photographs. He gets unusual shots on a constant basis. One you may have seen on our front page: 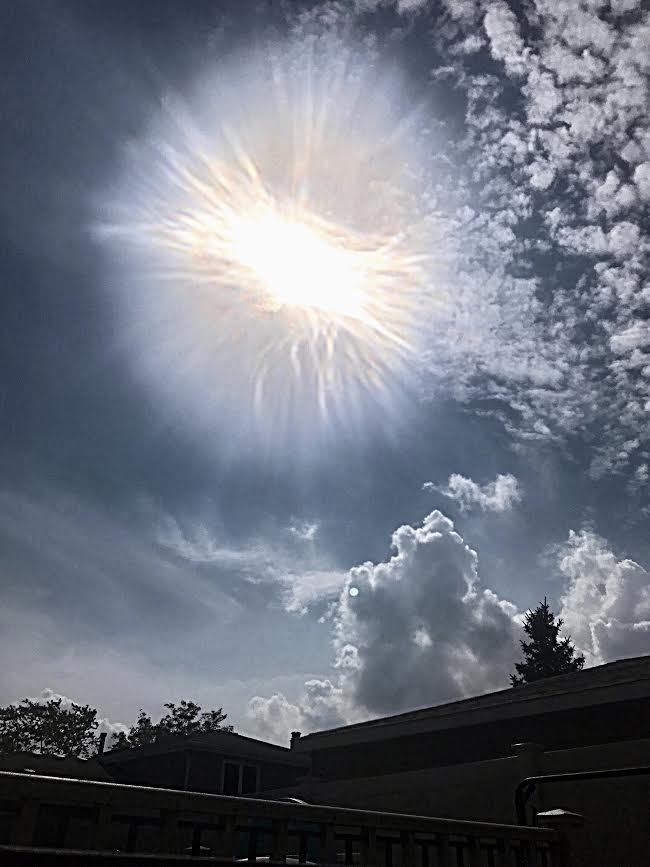 Now, that’s the sun as we have not previously seen it! (Perhaps you have?) How great is He Who is so hidden but created all that surrounds us and radiates from above!

On the official day for the Virgin’s birthday (September 8), this same fellow, who requests anonymity, took several cell shots of a Virgin statue and came up with this: 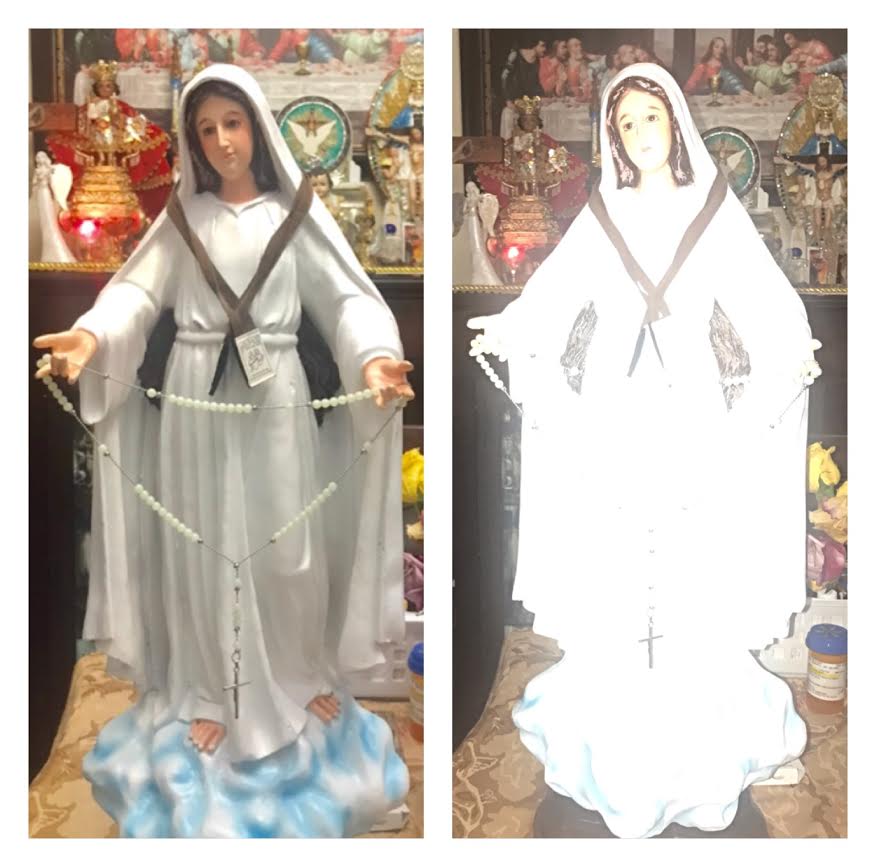 It was not the product of a flash. But you are more than free to speculate on what is occurring.

No doubt there are those whose excogitations will include “photoshoppery.” He certainly isn’t trying to draw attention to himself — and seems as baffled as anyone as to why such photos (they are endless) happen.

Yesterday he wrote, “Taken today 4:50 pm with message for me. Please pray the truth of this message: ‘I am your Mother of Sorrows. I am suffering and begging for my Beloved Son to forgive mankind.  I am praying to the whole world. Continue to pray for young children because they are the only hope for the  next generation. They are my Son’s young, new disciples. Please pray and pray, as I am with you all the time!'” He then took the photos below — at the very least, more unique angles of the sun!

On another occasion, he explained: “This is the memorable manifestation of God that I cannot seem to forget. On October 19, 2012, my friend and I were going outside on a sunny day when we saw a estate sale near my house. We stopped and went inside. I was surprised when we did because there were many people. I went upstairs and saw a beautiful image of Lord Jesus.

“Personally, I felt that the people nearby ignored the picture frame. I decided to buy the frame before we went home. To my surprise, the picture frame started to weep holy oil. I didn’t know what to do at the moment. I was excited, a mix of happiness accompanied by tears of joy. I was especially surprised because I

expected a normal amount of oil but instead, I noticed that it was a different manifestation of God. The image of Jesus was starting to weep but in a different way.

“A halo appeared above his head with what looks like a shower around his head. I cried  because for the first time in my life, I saw the wonders from God. From the picture frame, I noticed that the cross of Jesus appeared in one of the bottom corners. I believe when he died he was in this position. Since this has happened, I am in surrender to God. I pray that in my mind, I am dust and a sinner which is why God had showed me his manifestation. From this experience, my friend told me that nothing is impossible to God. He can forgive as well as give chances because he is the God of Mercy.”

Again — as always: you discern. Who or what is behind it?

Most recently he wrote: “I was praying for the souls in purgatory, lying down in my dark room. After my prayer, I took a picture of the altar using my cellphone. The image appeared with a thick, cloudy smoke in the background as well as the face of a person on the drawer with a soul kneeling nearby. The souls may be appearing because it serves as a reminder that the month for them is coming. They will still need our prayers.” 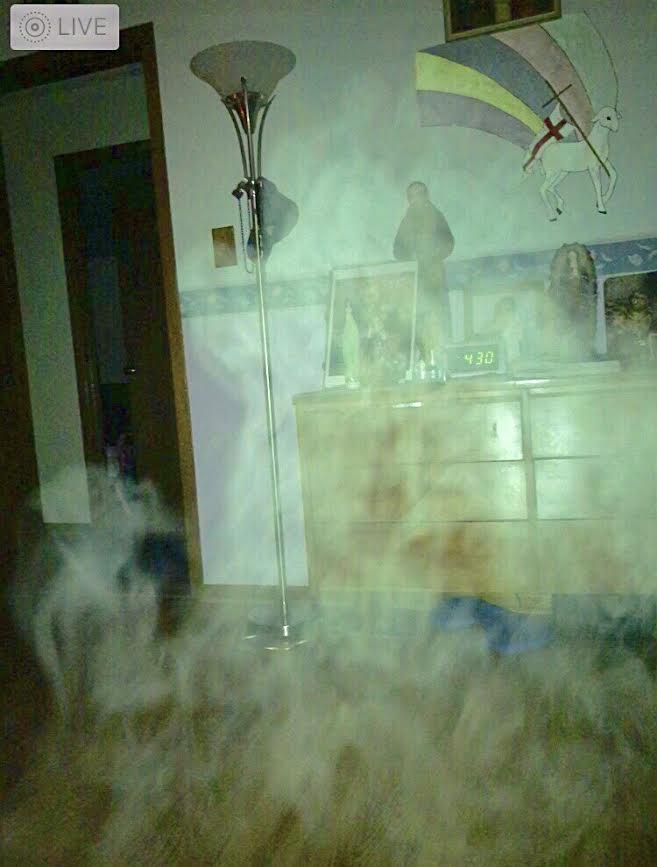 Yes, we skate at the edge with such things — or (remembering the famous scene in Star Wars) is a better metaphor that with such things one is stepping off the ledge and into the void Luke Skywalker-style — exercising faith?

Endlessly, we mention “pareidolia” — when

the mind interprets something out of clouds and fog or patterns, forms images in our cerebral circuitry according to our preconceived notions. Is it the monument of a face on Mars or (more likely) the happenstance of rock formations?

At a retreat in Kansas recently one noted a pattern in the carpet that — if one really wanted to — one could be seen as the top half of a face (in the middle whitish area) of singer John Lennon (with some not-so-nice faces beneath).

Pareidolia. A peculiar working of the mind.

Really, is it nothing? Do we not see what we’re programmed for?

Valid questions. But two more points to be made:

Recently, we ran a photo from 9/11 that showed what even secular folks immediately said (many with a gasp) was a demonic face in the smoke of September 11. In the comments below, over there at Facebook (where sometimes folks get off the wrong side of the bed), a woman writer declared with no qualifier (and no evidence) that it was “photo-shopped.” She was very sure of that.

The only problem with her supposition: the photo was taken by journalists of live television images that came over CNN, as the event was occurring. You can call it a coincidence, but it clearly was not fake.

Let’s be careful not to accept nor (at the other extreme) disdain too quickly.

And whatever is or isn’t valid, one recalls that quote from the famous geneticist and philosopher J.B. S. Haldane, who once quipped that “the universe is not only stranger than we imagine, it’s stranger than we can imagine.”