It’s nearly unprecedented for a bishop to make such a request, never mind at age 84. The last time the hierarchy was jolted like this was during the revelations about Cardinal Theodore McCarrick — who was laicizied not because he volunteered, but as per an order from Rome.

The Catholic Church has been in deep turmoil for twenty years, since the sexual abuse crisis first burst upon the scene. That turmoil has metastasized not so much now in the way of abuse (more on that in a minute), but with dissent from radically liberal clerics in Germany (whom the Vatican just last weekend asked to suspend a wayward Synod), dissatisfaction among traditionalists in places such as the United States and parts of Africa (with what they see as modernistic trends in Rome, greatly exacerbated by the restrictions on Latin Mass), and general disaffection in the public sector, especially among the young — who are wandering from all religions. (Even non-denominational “mega-churches” are witnessing losses as “nones” — those with no declared religion — proliferate — although youth still profess respect for Jesus, a hopeful indicator.)

While the abuse crisis is decidedly on the wane, and while there are signs of recouping past losses (with a steady stream now of new vocations, seminarians who trend toward orthodoxy and conservatism), occasionally there are still zingers such as former Bishop Howard Hubbard, retired from the Albany, New York diocese and accused of covering up for abuse priests and abusing the young himself. Last week it became known he requested not just removal from active priestly duties but as mentioned, return to the laity. He will be of no more authority than the average Catholic.

If Hubbard’s laicization is approved by Pope Francis, the prelate would be only the second accused U.S. bishop and eighth accused bishop worldwide to be laicized, according to BishopAccountability.org.

As former residents of that part of Upstate New York, we can testify to the sterile nature generated there during Bishop Hubbard’s reign, as well as the prevalence of clerical homosexuality: the church where our kids attended grammar school harbored John Bertolucci, a well-known Catholic evangelist who was caught in scandal and removed (now deceased, after living a life in prayer and penance); a priest at a church two miles away where we also attended Mass who was living with his male friend; another priest at that church who had to settle a lawsuit for having relations with a homeless man; and even a priest — an immigrant from Ireland — who was caught on camera by the New York Post at a local supermarket dressed as a woman.

At a third church we attended was a priest about whom we were forced to complain because he was not elevating the Host. He acquiesced (after the pastor refused, initially, to ask him to follow rubrics), but was convicted of abusing youth as young as eleven. Pray for all of the above: at least eighty-four priests from the diocese were named as abusers over the past eighty years or so.

At a fourth we occasionally went to, the pastor held hands in a very suspect way with an altar boy, who didn’t not look like the type to reciprocate (poor kid). The pastor was much later accused of abuse (which he denied).

Pray for all of the above: at least eighty-four priests have been cited as abusers over the past eighty years or so. Whether they all are guilty is another matter.

But a tough place, that diocese (though now, improving). It is not an overstatement to look upon Albany during the time we were there as having been a safe haven for homosexuality. So extensive were the transgressions — the culture of homosexuality (Bishop Hubbard took problematic priests in from elsewhere) — that a law firm openly urges — advertises — for those who similarly (and allegedly) experienced abuse to contact them. (Lawyers across America have been raking in hundreds of millions on settlements that have bankrupted any number of dioceses. Such conduct itself is another scandal.)

Hopefully, with now a new bishop — who is more conservative — the situation in Upstate New York will turn around. But Albany joins a number of other dioceses in the extent of waywardness: places such as Rochester and Buffalo, New York, and parts of Minnesota, Michigan, and Wisconsin, to name a few.

While this all seems to paint a dismal picture, the Church in substantial ways is showing signs, if not of renewal, of reinvigoration. In addition to the conservative seminarians come recent stories of media personalities converting to Catholicism from the Protestant faith or non-denominational church.

Said one, Cameron Bertuzzi, a highly popular Protestant YouTube host, “So, the big announcement is that on Sept. 20, 2022, I decided to become Catholic. I’m currently in an RCIA program and will be confirmed this coming Easter.” His conversion “came at the tail end of a deep study into the evidence for and against the papacy,” he said in a YouTube video. “As a Protestant, I went into the study with an open mind. Ultimately, I told myself that I would follow the evidence wherever it leads, even if that conclusion is uncomfortable for me or for my family.”

Meanwhile, a longtime TV personality, Chuck Gaidica, of WDIV-TV in Detroit — a former non-denominational pastor — in October announced, at St. Stephen Church in Port Huron, that he was returning to the faith of his childhood.

More encouragement comes from the public sector in the way of a priest named Father Mike Schmitz, who has garnered a phenomenal podcast audience — mainly young. As The New York Times noted, “Since it was introduced by the Catholic priest Mike Schmitz, who goes by Father Mike, in January 2021, the little-heralded “The Bible in a Year (With Fr. Mike Schmitz)” has been the most popular Apple religion podcast for a majority of 2021 and 2022 and has even, on two occasions, reached the No. 1 spot among all podcasts on Apple’s platform. The show has been downloaded 350 million times and an average of 750,000 times a day.” 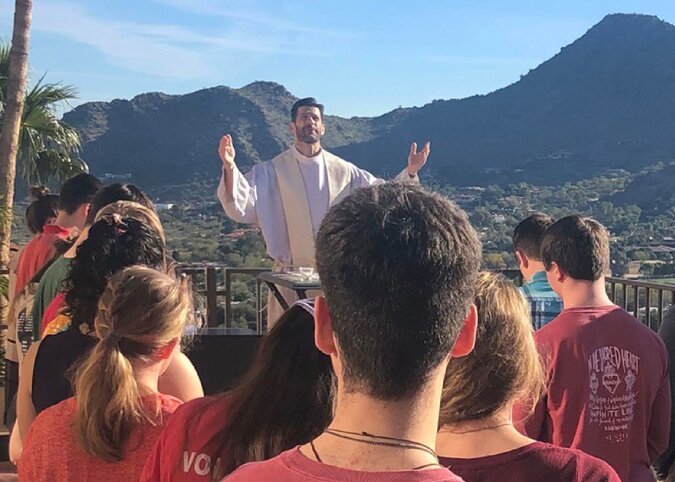 Now, Jesus said to feed the sheep, not count them.

But these are mightily uplifting numbers, for sure. 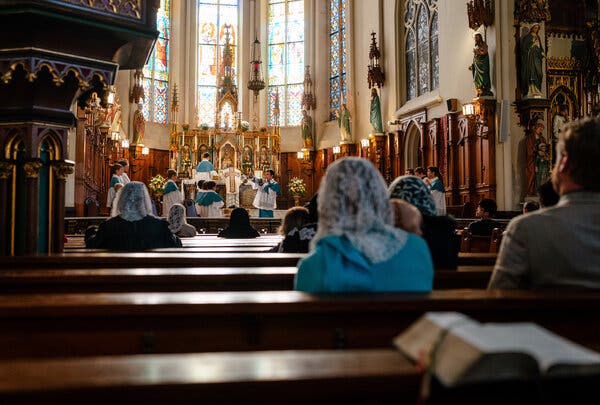 Said that newspaper, “Though it represents a fraction of Masses performed at the 17,000 Catholic parishes in the United States, it is thriving. The United States now appears to have at least 600 venues offering the traditional Mass, the most by far of any country. More than 400 venues offer it every Sunday, according to one online directory.” Noted a devout Catholic blogger, “Journalist Ruth Graham has done a remarkable feature that does justice to the Mass and the people who love the Mass.”

Oh, it can look bad for the Church. In the future, on the surface, it may even look worse. Various and sundry prophets have raised alarm over the German bishops and priests, some of whom want to bless homosexual marriages, admit active gays and women to the priesthood, and in one case (a priest), even spoke publicly in favor of pornography as a relief valve for priests struggling with celibacy!

Oh, it can look bad: But remember that this is the Mother Church of Christianity; its numbers globally continue to grow (now 1.3 billion); and it will weather any storm, external or internal, and dissent from whatever end of the spectrum, for it is founded (literally) on the Rock of Peter, whose ossified bones have been identified below the Vatican.