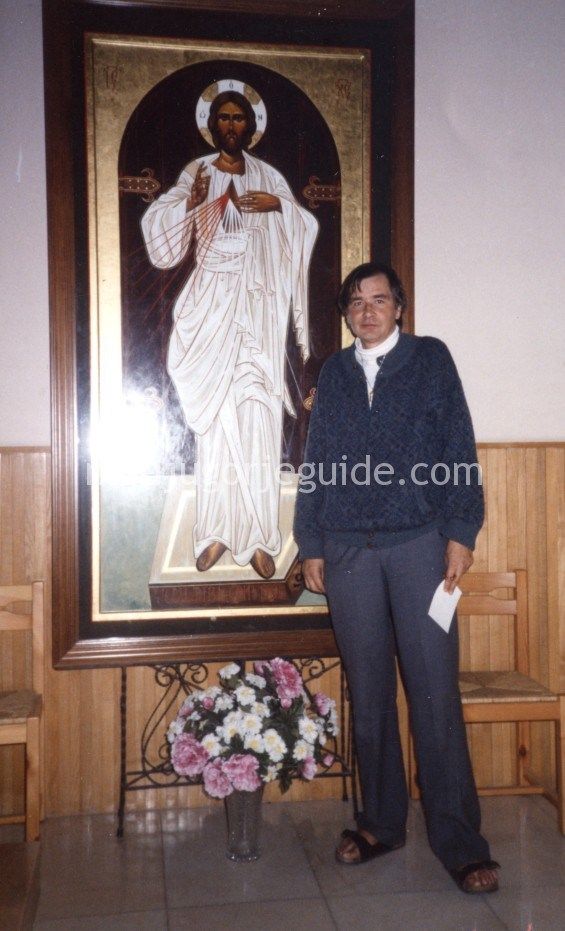 Ugo Festa was born in Vicenza, Italy, in 1951. He was struck down at an early age with multiple sclerosis, his health gradually — relentlessly — deteriorating.

This led to many other problems in his young life.

By the age of 39, he was suffering not only from multiple sclerosis but muscular dystrophy and epilepsy.

Early in 1990, Festa’s spine contorted and he was having seizures daily — continually attending doctors who could do nothing for him. Ugo decided there was nothing left to try but prayer. 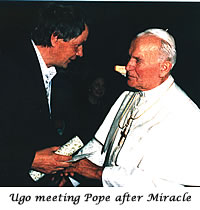 went with a pilgrimage to Rome. In his unfortunate situation, he was introduced to Mother Teresa, who was in Rome at the time with a group he got to know. Ugo was invited along with this group to a retreat at the shrine of Divine Mercy in Trent, but he refused. On leaving, one of the group, a nun, gave him five copies of the Divine Image Picture and a Divine Mercy medal. The following day the 29th April 1990, Ugo wore the medal and carried in his arms the Images to be blessed to the papal audience at the Vatican. At the bottom of the steps to St. Peter’s the Holy Father passed by. Ugo asked him to bless his Divine Mercy pictures. After blessing the pictures the Pope asked him how he was.

Ugo told the Holy Father — John Paul II —  he felt very despondent and was at a crisis in his life. The Holy Father said “How could you have a crisis with Jesus the Divine Mercy in your arms? Entrust yourself to him and pray for my Sister Faustina 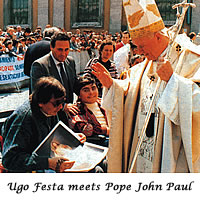 to intercede.” With this advice Ugo changed his mind and decided he would go to the Divine Mercy Shrine in Trent after all.

At the side altar in the Villa O’Santissima Villazzano in Trent, there is a shrine to the Divine Mercy with a life-sized icon of the Divine Image. On the fourth day of praying in front of this icon, Ugo suddenly noticed the arms of the Image stretched out to him and tremendous warmth flowed through his body. He found himself standing on his feet with his arms outstretched to the Lord and he heard himself loudly praising Jesus the Divine Mercy. He saw Jesus coming down to him, his white garment blowing as if in a breeze, and he thought, “My God, this is the man from Galilee coming to me.”

Then he heard Jesus say in a clear voice, “Rise up and walk.” And Ugo Festa began to walk!

True story. All his ailments were at that instant cured and he was more physically perfect than he had ever been in his life.

On August 19th, 1990, Ugo returned to the Vatican and during a Papal Audience at Paul VI Hall, was taken to meet Pope John Paul II again. He told him about the great grace he had received and thanked him for the words of inspiration which led him to Trent and resulted in this great miracle of Divine Mercy. He gave Pope John Paul II a copy of the Divine Image, with the signatures on the back of the many people who witnessed the miracle on that day.

Ugo Festa thereafter devoted his life to Jesus, voluntarily working with disabled people and spreading the Message of Divine Mercy throughout Italy. The image is now in a chapel at Šurmanci in the parish of Medjugorje.

From Medjugorje Council of Ireland:

Ugo dedicated the rest of his life to spreading Divine Mercy, serving the poor and infirm in hospitals and on the streets in Italy and Africa. He would hand out Divine Mercy prayer cards and encourage people to pray the Divine Mercy Chaplet and venerate the Divine Mercy Image, as Christ Himself encouraged through St. Faustina in her visions in the 1930s. Christ promises many graces to those who venerate the image.

Ugo was diagnosed with cancer in 2005. He told his friends he wasn’t fearful. He put his trust in Jesus.

On the 22nd  May 2005, Ugo was found dead from gunshots to his head, in Italy. Two individuals were arrested. The motive is not known. A priest-friend, Father Seraphim Michalenko of the Divine Mercy shrine in Stockbridge, Massachusetts, consoled all, saying, “But he predicted this; he said that his work in the streets was putting his life in danger, but he was willing to die for it.”