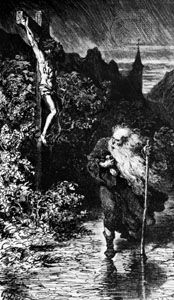 Call it the “Mystery of the Wandering Jew.”

For a mystery it is.

Who was it, as Scripture relates, who taunted or even struck the Lord just before His Crucifixion, perhaps even on the Way of the Cross?

One gets this from Encyclopedia Britannica, which relates: “wandering Jew, in Christian legend:, character doomed to live until the end of the world because he taunted Jesus on the way to the Crucifixion. A reference in John 18:20–22 to an officer who struck Jesus at his arraignment before Annas is sometimes cited as the basis for the legend.

“The medieval English chronicler Roger of Wendover describes in his Flores historiarum how an archbishop from Greater Armenia, visiting England in 1228, reported that there was in Armenia a man formerly called Cartaphilus who claimed he had been Pontius Pilate’s doorkeeper and had struck Jesus on his way to Calvary, urging Him to go faster. Jesus replied, ‘I go, and you will wait till I return.'”

That connects with Matthew 16:28: “Truly I tell you, some who are standing here will not taste death before they see the Son of Man coming in His kingdom.”

Thus the notion of endless “wandering.“

Some give him the name Malchus — not the same guard who struck Jesus, but the servant of a high priest. Adds Wikipedia: “The Wandering Jew is a mythical immortal man whose legend began to spread in Europe in the 13th century. The original legend concerns a Jew who taunted Jesus on the way to the Crucifixion and was then cursed to walk the earth until the Second Coming. The exact nature of the wanderer’s indiscretion varies in different versions of the tale, as do aspects of his character; sometimes he is said to be a shoemaker or other tradesman, while sometimes he is the doorman at Pontius Pilate’s estate.”

Or is it Lazarus — as one sci-fi writer hypothesized? 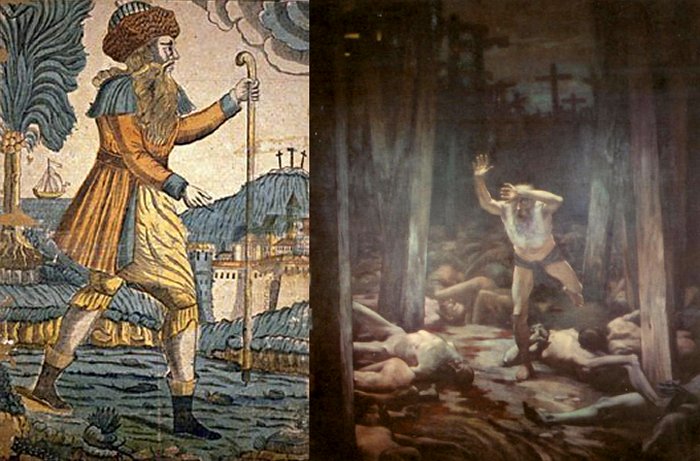 Let’s put it this way: we all wander. We wander to and from Jesus. We certainly like to wander from the Cross.

This Lent, let us wander no longer. Let us go directly to Calvary. For when we embrace His Cross and realize with full cognizance what Jesus did for us — when we truly take it to heart — we are on that right, direct path.

“Lend an ear to the Savior’s Voice. Understand the truth and bear witness to it. Keep silence in order to hear and to understand the Lord’s Voice.

“But beware of lending an ear to the echo of your own thoughts.

“Beware of hearing only yourselves.

“Free yourself from your ideas and let God purify them, by cutting away what must be eliminated and rewriting what must be rewritten.”

“The whole universe moves around the mystery of the Cross,” wrote the saint.

“Lend an ear to the process of the universe of which you are a part,” he said, “and you will hear it is on a pilgrimage to the Heart of the Father.”

[resources: Love Is a Radiant Light: The Life and Words of St. Charbel]