A wise person we knew, one who had been an altar boy in the 1930s, always used to say, “What the Church fears most is scandal.” And how true that has proven to be, now that we see how it did what it could to prevent scandals from erupting publicly and how, for many years, Popes, cardinals, bishops, abbots, and priests treated “problems” as private matters — felt that they were not under the law, that they would take care of it themselves, preventing embarrassment and a loss of credibility.

Of course, it did not work. Call it an “apocalypse” or an “armageddon”: the Church now faces a purification the likes of which has not been seen in centuries, especially in America, where at least five states are now following in the footsteps of Pennsylvania and launching investigations that may take time but will detonate as public-relations nightmares and even cataclysms.

The result will in the end be a cleansed new Church replacing the current artificial bureaucratic way of ministry, but the door could also be opened to persecution.

Those who have a natural disinclination toward Christianity in general and Catholicism in particular (against which the devils rage) will now have a rationale to attempt a crushing blow. It may not come as comfort to note that two states announcing that they will subpoena dioceses have attorney generals who are liberal Democrats — one Jewish, the other from India, if that factors in whatsoever. Time will tell. Let us admit that the Church put the Institution above Spirit and above the welfare of its flock. In many ways, we are witnessing the fall of a False Church, and should praise God for it.

One more recognizable to the early Church fathers, to the twelve apostles, to Christ will result. 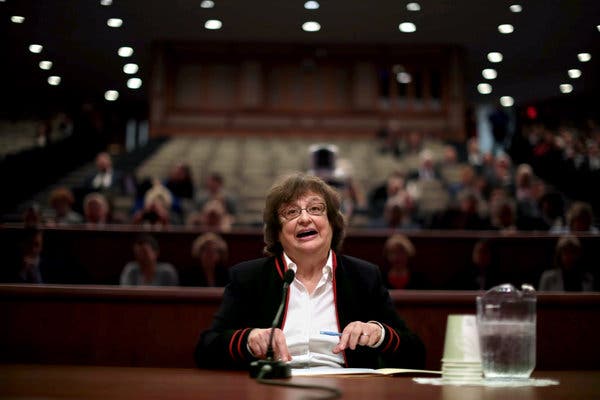 Alarms should be ringing, particularly in Albany, Buffalo, Rochester, Newark, and New York City. The bottom line: big-time danger. Said New York’s attorney general, “The Pennsylvania grand jury report shined a light on incredibly disturbing and depraved acts by Catholic clergy, assisted by a culture of secrecy and cover ups in the dioceses. Victims in New York deserve to be heard as well — and we are going to do everything in our power to bring them the justice they deserve.”

While we already know there have been nearly 7,000 U.S. priests involved during the past seven decades in immoral and often criminal relationships, the investigations will cast a national spotlight on it, as will other states that are sure to follow, overthrowing the methodology of bishops and perhaps leading even to prison sentences.

The Church in America is now in a significant degree of jeopardy and must be completely overhauled (as it will be, voluntarily or otherwise) before it regains full credibility. Purification is painful but good. The question again is whether it all will be used by antagonistic secular forces to persecute.

The McCarrick-Pope angle, in comparison, is a minor subplot.

This is a crisis that dates back through at least six Popes.

Some say the homosexual infiltration goes back further, to the Roaring Twenties — and a few even claim Communists helped it along (more of that in a future commentary).

What is the mystery behind the year 1955?

If the Pennsylvania report is a microcosm of the national incidence, the crux of the crisis began around that year, skyrocketed from 1970 to 1985, as it did nationally, and then declined precipitously. Since the bishops took actions and passed new guidelines in 2002, the incidence of abuse has fallen back to pre-1955 levels. 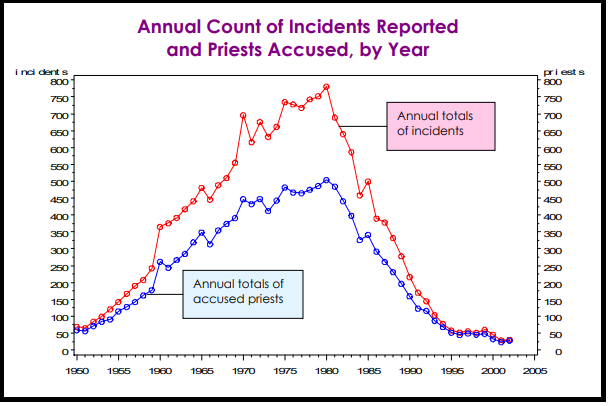 That’s “good” news. And 1955? We had, that year, in the culture — which obviously influences priests –the television debut of Elvis Presley (for what it’s worth), the film Rebel Without A Cause, Peter Pan, the opening of Disneyland, and young men’s fashion matching the times with pink shirts and charcoal grey suits. In politics: the exit of Churchill and the beginning of Viet Nam.

Then, proceed did we, through the explosive, defining, and nefarious 1960s (which included free sex, drugs, contraception, a lifting of all taboos, a libido beat in music, the gay-rights Stonewall riot, and Vatican II) and into the Saturday night fever of the seventies. It wasn’t a Pope to blame for it in 1955. The saintly Pius XII was still in charge that year. At any rate, the explosion in priestly sin stretched into the pontificate of equally saintly John Paul II the Great, though within a few years it quickly simmered down (in Pennsylvania).

But a crisis remained and remains, the crisis of homosexuality. In the final analysis, the poster boy may not be ex-Cardinal McCarrick but Father Marcial Maciel, founder of the Legion of Christ.

Consider, as the New York Review put it: “Of all the terrible sexual scandals the hierarchs in the Vatican find themselves tangled in, none is likely to do as much institutional damage as the astounding and still unfolding story of the Mexican priest Marcial Maciel. The crimes committed against children by other priests and bishops may provoke rage, but they also make one want to look away. With Father Maciel, on the other hand, one can hardly tear oneself from the ghastly drama as it unfolds, page by page, revelation by revelation, in the Mexican press.

“Father Maciel, who was born in Mexico and died in 2008 at the age of eighty-seven, was known around the Catholic world. Against ordinarily insurmountable obstacles, he founded what was to become one of the most dynamic, profitable, and conservative religious orders of the 20th century, which today has 800 priests, and approximately seventy thousand religious worldwide. The Legion of Christ, nearly 70 years old as an order, is comparatively small, but it is influential: it operates fifteen universities, and some 140,000 students are enrolled in its schools (In New York, its members teach in eleven parish schools); and its leadership has long enjoyed remarkable access to the Vatican hierarchy. Maciel was also a bigamist, pederast, dope fiend, and plagiarist.” He was accused of abusing twenty to a hundred seminarians and his own illegitimate children — a record difficult to beat.

And stealth? “In 1997, a Mexican woman who was living in Cuernavaca looked at the cover of the magazine Contenido—a Reader’s Digest-y sort of publication—and saw on it the face of her common-law husband. She had been his partner for 21 years and borne him two children, and she knew him as a private detective or ‘CIA agent’ who, for understandable work-related reasons, put in only occasional appearances at home. Now she learned that he was a priest and that his real name was Marcial Maciel. He was, the magazine said, the head of an order whose strictness and extreme conservatism appeared to hide some vile secrets.”

He was a priest who nearly damaged the canonization of Saint John Paul the Great and the reputation of Benedict XVI, who as Cardinal Ratzinger tried to deal with all the allegations, frustrated enough [see below] to even slightly slap the hand of a network correspondent (all too eager for scandal).

If so, know this:

Purification is good. Sanctity is the goal. The Church is not about the men in it; it was founded by God; it is about Jesus.